High goals in the hexagon

Monday is easy training. Tuesday is a four to five kilometer run along a forest trail. Wednesday is four hours of practice. Thursday is weightlifting and scrimmaging. Friday is easy again, a stretching day. Saturday is for tactical work. Sunday is the big game, and then the cycle begins again. 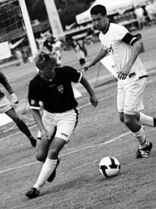 Erik Opsahl, a former Blazer set to graduate in 2010, recently made a life-changing decision. At the same time that his friends were starting college visits and filling out summer job applications, he was planning a big move to Auxerre, France, to pursue a professional soccer career. And since the end of August, he has been practicing with AJ Auxerre, a professional French club team, with others in his age group. These elite players will spend the year working on and off the field, vying for long-term contracts with the team. While he is excited to embrace the opportunity to follow his dream of playing professionally, Opsahl is sorry to leave behind a home and family in the U.S.

"Foot in the door"

Opsahl's recent move is the culmination of years of aspirations and determination. "I've always wanted to be a professional [soccer player]," he says. "That's always been a dream of mine." He and his father, who Opsahl says has always pushed him to improve his playing, have made every effort to help Opsahl to achieve his ambitions. Even during periods when he was not practicing with a team on a daily basis, he says he would set aside time to work on his skills by himself each day. Neither Opsahl nor his friends can remember a time when soccer was not the central force in his life. "Soccer has always been a big part of his life, since…probably forever," says senior Darcy Pelz-Butler, who met Opsahl in sixth grade and has been a close friend since.

But the dream only began to mold into reality in the summer of 2007, when he spent three months playing with a club team in Brazil. Originally only scheduled to stay for 10 days, Opsahl left such a strong impression on the coaches that they asked him to train with the team for the entire summer. Opsahl says this experience allowed the idea of a future in soccer settle in his mind. "It made me think there was a possibility," he says.

Howard Kohn, former assistant varsity boys' soccer coach, says he recognized Opsahl's potential as a player when he first saw the 7- or 8-year-old boy playing in the Takoma Park Recreational Soccer League. As he watched Opsahl on the Blair team last year, he says, this potential began to stand out even more prominently. "He was one of the strongest…and most skillful players," he says. "I've always been impressed by his ability."

By the time Opsahl made the trip to France in April for the tryout, he was an old pro, not just in his game but also in his experience — he had already been to several overseas tryouts, tournaments and training sessions. AJ Auxerre asked him to return for nine months on an agreement, beginning in August. If they were still impressed by his skills in May 2010, they said, they would reward him with a paid contract. From there, he could go on to play in the English Premier League or even come home to play for the U.S national team. "This is just kind of like a starting point," he explains, "like getting a foot in the door."

Photo:
The sudden opportunity forced Opsahl to weigh his priorities, but close friend and senior Mady Nadje believes the decision was truly made the moment Opsahl was accepted — he was meant to play soccer. "He said he was still choosing," Nadje says, "but we kind of all knew that he was going to go." Though it meant saying goodbye to his friend for a time, Nadje even tried to convince Opsahl to take advantage of the opportunity. "Live it out and you're going to reap the benefits eventually," he told Opsahl.

Opsahl, however, says the choice was never obvious to him. He went back and forth in the weeks before he had to decide, discussing his options with his parents. Though they too are passionate about his identity as a soccer player, Opsahl says he knew they would respect his choice either way. "My parents are very supportive in whatever I want," he says. "They're behind me." He also realized that going to France to pursue his dream would mean giving up senior year with his friends. The tradeoff hurt, he says, but the chance was too great to pass up. And according to Opsahl, remaining at home for soccer was never a plausible option because of the vast gap in quality of play between the U.S. and other areas of the world. He explains that this gap exists because soccer is not the dominant sport in the U.S. as it is in many other countries. "If you want to compare yourself to other players, the best place to go is abroad," he says.

Though he has spent much of his life in preparation for such an opportunity, Opsahl says he certainly has his own moments of sorrow about leaving home. The rainy August sendoff was bittersweet for all involved, and Opsahl found it difficult to part with his friends and family when the time came. Since then, he says he has begun to adjust, but the pangs of homesickness remain. "I think I cope with it better now," he says. "That day was sad, though."

Even now, melancholy sometimes creeps over Opsahl when he is alone in his apartment. Living in a foreign country without television or a roommate, he says he often feels lonely despite the many hours he spends on the field with the team. "I'm by myself. I don't really know anyone," he says. "I miss pretty much everyone I knew. I miss Washington, D.C., more than I thought I would." At the same time, however, he enjoys the freedom and independence of taking care of himself in his own apartment. And to deal with the separation from his home and loved, Opsahl says he keeps in touch with his family and friends through Facebook, Skype, text messaging and phone conversations.

But Nadje notes that this kind of distanced communication can only fill so many holes. Although he wishes Opsahl the best of luck in France, Nadje is sorry that Opsahl will be missing a much-anticipated senior year. "He can't graduate with us in 2010, a Blazer," he says.

The game of life

Graduating on time was one of Opsahl's main concerns when he decided to make the move. He has begun taking online classes and will continue to do so throughout the year to complete the credits required to finish high school in the same year, if not on the same continent, as his friends. If given the option, Opsahl would like to return and toss up his cap with the Blair class of 2010 at graduation. Even so, Pelz-Butler says she wonders whether the better choice might have been to wait until graduation before jumping into a sports career. "I guess it was a good opportunity," she says. "I don't know if it was the right time."

For now, Opsahl continues to adjust himself to his new, sports-driven lifestyle and put all of his energy into his game on the field. The practices are more fast-paced and the level of play much higher than what he has experienced before, he says, and he thrives off the competition. Though he cannot play in the Sunday games until he gets his license, Opsahl says he is pushing himself as hard as he can in practice and has confidence in his ability. Kohn shares this confidence and believes that Opsahl has a decent chance at earning a contract with the team as long as he focuses on certain aspects of his play. "They all matter — size, strength, skill," he says. "But the thing that really matters the most at the level he wants to be at is the speed at which you play the game. I think he's absolutely capable of reaching that level."

If all goes well, Opsahl will be able to find a permanent place in his new home and keep both of these worlds — his past and his future — as a part of one life.