In a match featuring the music industry's best, who will win?

When two of today's greatest rap moguls have the same release date for much-hyped albums, peace can't exactly be expected in the music industry.

Superstars Kanye West and 50 Cent, both of whom had new albums released on Sept. 11, are locked in a showdown of album sales. This summer, 50 Cent, whose CD "Curtis" features the hit "Ayo Technology," announced that if his album sold less than West's release "Graduation," he'd retire as a solo artist. So who will win? Let the sales decide...

Julia Mazerov says: Kanye "graduates" at the top of his class

The first was all about self-empowerment. The second offered an eclectic variety of topics, from a tribute to his "mama" to the lamentation of his grandmother's financial and medical state. And the third, well, it's all about Kanye West, in all his Louis Vuitton donning, iced-out glory. Though the cockiness is over-the-top obnoxious, West's third album, titled "Graduation" is, for the most part, just as catchy and lyrically genius as his freshman and sophomore standouts. He definitely deserves some props, just not as many as he thinks. 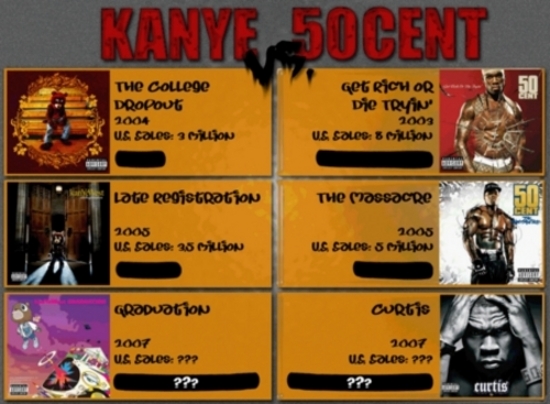 By track three, we're already "bow[ing] in the presence of greatness." During track five, we hear all about "the good life," and all the cars, designer threads, and expensive vacations that accompany it. Track seven is about as blunt as West can get: "Top 5 MCs you gotta rewind me/I'm high up on the line, you can get behind me/But my head's so big you can't sit behind me." Track nine, well, you get the idea.

Yet beneath this confident veneer is a rapper much more complex than he's willing to let on within most of his tracks. With such a huge ego, it's a wonder West would take any time to recognize the talent of others, yet "Big Brother" is four minutes and 47 seconds of straight reverence to Jay-Z. West also makes note of his desire to be "BIG" someday, praising the work of Big Pun, Big L, and Notorious B.I.G. In addition, "Homecoming" is all about returning to his birthplace of Chi-town and seeing his childhood sweetheart.

"Good Life," arguably the best track on the CD, is reminiscent of an older hit, "We Don't Care." West snatches a lyric from this track as well as "School Spirit," combining the two influences in a downright soulful chorus of "Now throw your hands up in the sky/I'ma get on this TV mama/I'ma, I'ma put [expletive] down." Though the entirety of the song is West pretentiously touting how much better his life has gotten since he's struck fame and fortune, the track is still so upbeat that its easy to look past its obnoxious message. It's also a collaboration with hip-hop's one and only T-Pain, whose harmonic, smooth voice is the perfect blend with Kanye's rough vocals.

While "Good Life" may be the best song on "Graduation," "Drunk and Hot Girls" is a definite contender for the worst, perhaps the worst song Kanye has ever recorded. It's a song about exactly what the title suggests, with awful, thoughtless lyrics like "Please don't fall asleep baby we almost back/Please don't throw up in the car we almost crash." Considering it's a duo with Mos Def, who has the potential to bring so much to a track, it's really a shame that the talent of such a powerful pair was wasted on a song about inebriated hotties.

Fortunately, "Drunk and Hot Girls" is really the only cringe-worthy track on the album. The rest are both lyrically humorous and full of turntable scratching, unique synth, and funky beats. Two noteworthy tracks are "Glory," which samples a sped-up version of Laura Nyro's "Save the Country," undoubtedly the best aspect of the whole package, and "Flashing Lights," which, though it mirrors the cockiness aspect of the rest of the album, has perhaps the most vibrant, dance-worthy beat of any track.

And then of course, there's "Stronger," which has been at the top of the billboard charts for months. It's so different from what West has brought us in the past, with a funky, futuristic-sounding partnership with electronica-dance duo Daft Punk. "Can't Tell Me Nothing" has also made it to the top of the charts, despite its thematic differences from the rest of the album. Rather than relentlessly praising himself, West actually sounds defensive and remorseful on this one. "I feel the pressure, under more scrutiny/And what I do? Act more stupidly," he regrets. The slow, dreary rhythm adds to the negative lyrics to create an overall gloomy yet still likable track.

Though West didn't use "Graduation" to throw out many meaningful messages or stir up political controversy, his creative ambition shines through regardless. He may be talking about himself for 50 of the 60-minutes of verse on the CD, but the humorous lyrics and catchy beats still warrant this album undoubtedly worthwhile. It's hard to imagine that West can get much cockier on his next album, so his fans should be excited about what his next album release will bring to the world of hip-hop. Let's just hope his head hasn't gotten too big for him to fit in the recording studio.

To appeal to his fans, 50 Cent relies on repetitive rhymes about his life on the streets. But despite his gangster attributions, he has added a new element to his music: selflessness. Unlike 50 Cent's older albums, such as "The Massacre", he doesn't strive to be the center of his music. Instead, 50 Cent is focusing on his profits, even if it means sharing the mic with other musicians. This decision allows "Curtis" to sound more versatile and to display catchier beats that trump his previous works.

Collaborations with R&B moguls Robin Thicke and Mary J. Blige, make "Curtis" a more diverse record compared to the previous 50 Cent efforts. In the track "All of Me" featuring Mary J. Blige, 50 Cent takes a step back and allows Blige to take control of the song's hook. Her audacity and beautiful harmony makes this track complete. "Follow My Lead," features the same mellow beat and lyrics that make it similar to 50 Cent's old hit "21 Questions." However, Robin Thicke gives this particular track a soulful vibe.

Although Curtis's first few hits didn't live up to expectations, it might change with his single "Ayo Technology." Justin Timberlake's lyrics combined with Timberland's speedy and unique beat makes this song exclusive.

Although 50 Cent has made more room for others to ensure his new record's success, he still lets his personal superstardom take up plenty of space. Establishing authoritative lyrics like "I run New York" in the song "I Get Money," and calling out some of the rap music's finest including Jay- Z and Nas, shows that 50 Cent still has his usual massive ego and self-confidence. However, funny lyrics like; "While Nas was tellin' Kelis I love you boo I was shinin' my nine, you know how I do," make 50 Cent's comments about other rappers forgivable.

Though 50 still seems to feed on the success of old hits like "21 Questions" and "Candy Shop" by producing similar tunes like "Follow my Lead" and "Amusement Park," his revitalizing satirical remarks and collaborations make the CD a comical attention grabber that is "gangster" at the same time.