"Hitchhiker's Guide:" One thumb up

Directing "The Hitchhiker's Guide to the Galaxy" was really a lose-lose proposition. Let's say the director pulls off a decent, accurate job. Fans of the book nod their heads at each other appreciatively as they leave the theater, maybe smiling a little; some of them are even uttering startled "It was so good" or "It was way better than I expected"s. The mainstream Hollywood audience, on the other hand, scratches its collective head and wonders what it's missing. When it goes to read the book, it stumbles across the inevitable "The book was better" conclusion, and by that time the movie is an obscure memory, even among the fans. And of course, there's always the possibility that the movie just sucks. 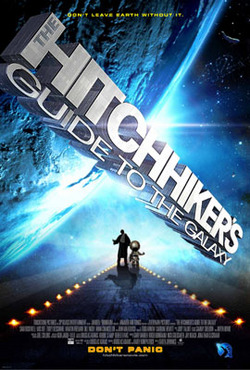 "Hitchhiker's Guide to the Galaxy" poster

Photo:
Director Garth Jennings, perhaps mindful of this conundrum, idles somewhere right in the middle. The result is a somewhat half-hearted, if serviceable, film translation of one of the best books in published sci-fi history.

The acting, which in this case could have floated the entire project, is disappointingly hit or miss. Arthur Dent (the perfectly ordinary Martin Freeman) is portrayed solidly, if almost too expressively. Ford Prefect (a startling but somehow fitting Mos Def) is, again, fine, but fails to capture adequately the truly alien nuances Adams spends so many paragraphs expounding upon. Of the lot of main-ish characters, earnest and wide-eyed Zooey Dechanel comes off best as the air-and-spacey Trillian, capturing perfectly her lurking romanticism and wanderlust. Conversely, Sam Rockwell's Zaphod is about ten degrees too surfer-dude, and the handling of his unique physical structure is sub-par. Unfortunately, the end result of these arrangements is that Zaphod's immediately annoying antics dominate the chemistry when he is on screen. Jennings would have gotten away with it, too, if it weren't for those meddling golden locks.

Jennings also fails to cleanly field the feel of Adam's overly ironic, dryly satirical style. Where Adams is subtly harping on small details that have little to no bearing on the plot (but are, nonetheless, hilarious), Jennings is giving us big explosions and huge panoramic CGI shots. Adams is a low-key kind of guy; his famous "Hitchhihker's Guide" did, after all, have the words Don't panic inscribed on its cover. Jennings, perhaps with a finger or two on what he presumed to be the red-blooded American pulse, fills his movie with… gunfights. Explosions. Characters vomiting string. The results are… clunky.

But they are also, to an extent, endearing. Even where differences exist, some of them are, in a blasphemous sort of way, funny. Marvin, despite looking like a be-globed Dr. Evil circa… nevermind – is of course bitterly and hilariously depressed, and scenes that were funny in the book haven't all lost their appeal (the whale and petunias, for example). Laughter dominated in the theater as the reasonably well-designed guide interface explained some of the stranger points of the Universe, even as the hardcore fans frowned their very hardest. Here's the point: "The Hitchhiker's Guide to the Galaxy" isn't perfect. Much like Adams' famous Guide, it contains some factual errors, omissions, and serious blunders from time to time. But don't panic. This is no travesty.

"The Hitchhiker's Guide to the Galaxy" (110 minutes) is rated PG for thematic elements, action and mild language.