Christine O'Donnell's campaign ad begins. She turns straight to the camera without green skin, warts or even a pointy black hat, and says, "I am not a witch.” 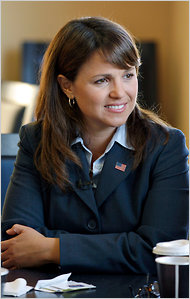 Photo: Christine O'Donnell professed in her campaign ad, "I am not a witch, I'm you."

Photo: Christine O'Donnell professed in her campaign ad, "I am not a witch, I'm you."

The most disturbing thing about this ad is not the fact that O'Donnell practiced witchcraft, but the that fact her involvement with the practice even matters at all. Even though she doesn't practice witchcraft anymore, many people still do worship the form of the Neopagan religion known as Wicca, otherwise referred to as Witchcraft or the Craft.

According to religioustolerance.org, people who practice Wicca represent the seventh largest organized religion and the tenth largest religious grouping in the U.S. Approximately 682,000 people admit they are Wiccan or other Neopagans. Wicca is a religion that worships a Goddess and a God, referred as the Triple Goddess and Horned God. Wicca also involves the ritual practice of magic, largely influenced by previous centuries. Another characteristic of witchcraft is the celebration of seasonally based festivals known as Sabbats.

Politicians have long been criticized by the public eye to the point of excessiveness. One should be judged upon their political standings, not their religion. Many people consider the religion of Wicca as not a religion at all, but a cult, and that is the reason voters will not cast their vote for O'Donnell, not because of her Tea Party politics, but because she used to practice witchcraft. Hate her for her politics, not her old religious beliefs.

Witchcraft can be a sensitive subject and the media needs to put the spotlight on the subject in an appropriate way. Hundreds of Indian women are killed each year for being accused of witchcraft. In Nigeria, countless children, also accused of being witches, end up in orphanages after suffering abuse in their villages. Yet, we hardly hear anything about these issues. The media should pay more attention to the people that need the attention when it comes to witchcraft and not a Tea Party candidate who "dabbled in witchcraft."