Hoelman grew up in Silver Spring, Maryland, and still lives in the area. He attended Highland View Elementary, Eastern Middle, and later Montgomery Blair High School, where he played golf, basketball, and baseball. Hoelman can still recount some of his favorite teachers in high school and the qualities that made them great. "They made class fun," he remembered. 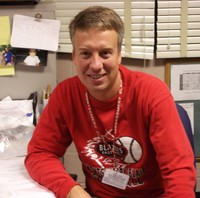 After graduating from Montgomery Blair in 1984, Hoelman attended Montgomery College. Around this time, he started a short stint as a pizza delivery boy, a job he describes as a lot of fun. Hoelman later graduated from the University of Maryland with a degree in physical education.

Hoelman worked as an athletic director at a boys and girls club for 13 years. There, he was in charge of setting up youth sports, training referees, and other athletic responsibilities. Hoelman said his positive experience at the club was one reason he decided to teach physical education "Everyone [there] said I should become a teacher," he explained.

Hoelman first worked as a gym teacher at Piney Branch Elementary, the first school to offer him a position after college graduation. While working at Piney Branch, Hoelman began coaching boys basketball at Wootton High School. Soon after, Montgomery Blair offered him a spot as the JV softball coach, a position he happily held for four years before becoming the varsity coach in 2000. "It became my favorite sport," he said.

In 1998, Hoelman left Piney Branch for Montgomery Blair High School. As a graduate still living in the community, he considered Blair the perfect school for him. Hoelman teaches weight training, and formerly taught basketball class. Among these, Hoelman said his favorite class to teach is general P.E. because of the variety and diversity of his students.

Hoelman believes that his strengths as a teacher lie mostly in his ability to communicate with students. "I rely on being nice, not bossy," he said. According to Hoelman, many of his fondest memories are from encouraging students to do the right thing and making a difference in their lives.

Hoelman loves teaching and the experiences that come with it. "There are good memories everyday," he said. Hoelman plans to continue teaching until he retires. "I will be around for a long time," he remarked.