Holding off a regressive era

Before this week's protests in Madison, the state of Wisconsin was pretty low on the average East Coaster's radar, representing nothing more than vague images of farmers, Cheeseheads and the Green Bay Packers. The citizens filling the streets and the halls of the State capitol and pushing state senators to a dramatic flight in hiding does not seem to follow the stereotype of soft-spoken, humble Midwesterner. But history shows that Wisconsinites respond with the ferocity of a badger when their rights are at stake. 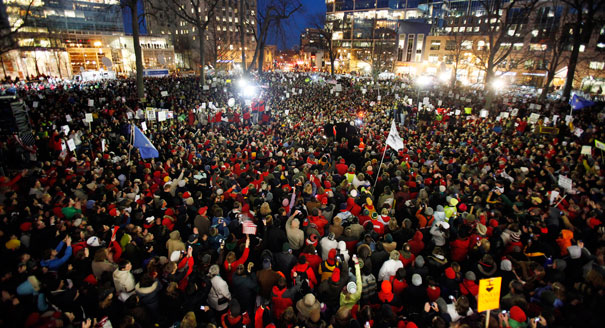 Photo: Thousands of Wisconsonites have been protesting in the streets for over a week.

Photo: Thousands of Wisconsonites have been protesting in the streets for over a week.

Recent protests in Madison sparked up when Republican Governor Scott Walker proposed a plan to reduce the $137 million budget shortfall, which was caused largely by his recent tax cuts to the rich. The proposal includes major cuts to the retirement and health benefits provided to teachers and public sector workers. More critically, it eliminates these workers' fundamental right to collectively negotiate their pay, benefits and working conditions.

This provision outraged the people of Wisconsin, who have spent the two weeks rallying in the streets and capitol. The Democratic state senators fled Wisconsin last week and remain in hiding; their absence denies Republicans a quorum and thus makes it impossible for the state Senate to vote on the bill.

The proposal is an intentional blow to labor unions, which are a major source of political support for Democrats. By diminishing the power of labor unions, Republicans hope to limit Democratic power in future elections. Trying to pass this measure in Wisconsin was a cornerstone in a larger Republican plan to destroy the public labor union movement across the country. This effort to destroy labor unions is extremely hypocritical in light of the Citizens United Supreme Court case of 2010. The case ruled that labor unions, multi-billion-dollar corporations and Political Action Committees (PACs) have the same right to free speech as individuals, granting them almost unlimited power to influence elections by donating huge sums of money. Republicans winning the fight against Democrat-backing labor unions, which give a voice to everyday people, would deplete the campaign donations of their opponents while corporations and interests groups are free to shovel money at Republican candidates. With such a corrupt plan at work, it's just too bad that Republicans chose Wisconsin as the place to get the ball rolling nationally.

During the Progressive Era of the early 1900s, Wisconsin was a foundation of reforms that fought the corrupt power of major industrial companies and promoted worker's rights. Ideas like being able to vote privately, without the influence of domineering party bosses as well as taxes proportional to one's income originated in Wisconsin and eventually spread to the federal government. That's why it's not surprising that when legislation in the 21st century threatens to take away these fundamental rights, progressive Wisconsinites' blood boils.

It's fitting that the cradle of Progressive Reform at the start of the past century can lead the U.S. in fighting political corruption at the start of this one. Wisconsin's fight against this Regressive Era shows promise of spreading doubt and outrage across the nation, but it will only make a difference if people are willing to stand up elsewhere.