Homecooking at the state level

Homecooked Frisbee is not affiliated with or sponsored by the Montgomery Blair High School athletic program or Montgomery County Public Schools. The team is an independent club of Blair students.

On May 3, Blair's independent ultimate frisbee club, Homecooked Frisbee, won the state title for ultimate frisbee. The Blazers entered into and won the Mixed Division in a tournament held for all Maryland high school teams at the Banneker Recreation Center in Catonsville, Maryland. 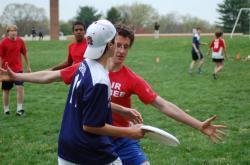 Homecooked Frisbee and Paint Branch competed in a best-of-three series of 13-point games to determine the state champion in the mixed division. The Blazers dominated the first game, crushing Paint Branch 13-3. The team then carried the momentum into the second, winning 13-7 to be crowned state champions.

Sponsored by the Washington Area Flying Disc Club (WAFC) in collaboration with the Ultimate Players Association (UPA), the tournament consisted of two divisions, the Open Division and the Mixed Division. High school teams could sign up for either division, and Homecooked Frisbee signed up for the Mixed Division. In the Mixed Division, each team must have three girls and three boys on the field at all times.

The Mixed Division consisted of only one other team, Paint Branch. The reason was that most teams do not have enough girl members, according to junior player David Wasser. Wasser is expected to be the captain for the team next year.

The championship came after an otherwise disappointing season. Homecooked Frisbee is still rebuilding after losing some key members due to graduation. "Two years ago we were fifth in the nation," Wasser said. "But now we are still building. We have a lot of good sophomore players who can be really great in two years." 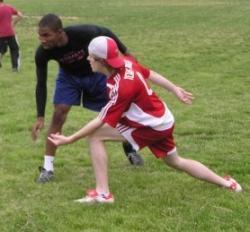 The majority of the spring games for Homecooked Frisbee were cancelled due to rain, according to Wasser; the Blazers lost the two games they managed to play. However, the Blazers' season is not over, as they look to ride the momentum from the state championships until the end of the season.

"We got the WAFC tournament coming up in a couple of weeks and I think we have the potential to do really well in that," Wasser said. In addition, Homecooked Frisbee has another game this Sunday at Sligo Middle School at 12 p.m.

Wasser was sidelined during the state games due to an ankle injury and will likely not play this Sunday. He hopes to return in time for the WAFC tournament.