Hopes to no postscript for "P.S. I Love You"

Worthwhile movies don't always have Oscar potential. But a good sign of a lousy film is when a top-notch actor decides to invest in a not so top-notch film. Take Ralph Fiennes in "Maid in Manhattan" for example. Likewise, two-time Academy Award-winning actress Hilary Swank in "P.S. I Love You" fails to add anything to this mawkish and clichéd chick flick. 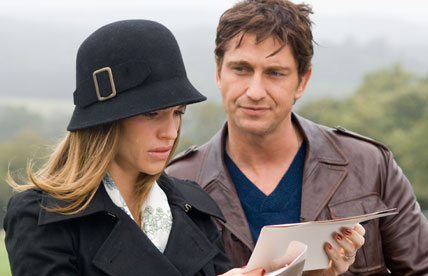 PS I love you

Photo: Holly reads one of Gerry's final letters as his spirit stands beside her. Photo courtesy of Warner Bros. Pictures.

Photo: Holly reads one of Gerry's final letters as his spirit stands beside her. Photo courtesy of Warner Bros. Pictures.


Holly (Swank) and Gerry Kennedy (Gerard Butler) are a perfect testament to a couple married young and still kicking. Aside from a couple of fights here and there, the pair is still madly in love. When Gerry dies due to a brain tumor, Holly's life is shattered and, naturally, she refuses to move on. Gerry, who clearly knew his wife very well, decides to help ease her pain by sending a series of letters to be sent to Holly posthumously, which dictated a series of spontaneous tasks, culminating in last-minute pleas before Gerry makes his final goodbye.

The twenty-minute intro pretty much summed up the rest of the movie. After a fiery argument between Holly and Gerry followed by a sudden, passionate make-up, it becomes clear that the movie will just be an agglomeration of attempted cute and candid moments. High-profile actors fail in these sorts of movies is because they just cannot pull off cute. Hilary Swank is no exception. Considering her superb performances in "Boys Don't Cry" and "Million Dollar Baby," it is quite an unpleasant change to see her worry about what her designer shoes think of her because she chucked them in a fit of anger.

One good thing about this movie is that it is funny – whether it intended to be is a different question. Scenes that were meant to be funny succeeded - like the antics pulled by Holly and best friends Denise and Sharon (Lisa Kudrow and Gina Gershon) – three girly-girls on a fishing trip. And the moments with Daniel, the socially-awkward bartender with the hots for Holly (Harry Connick, Jr.) are equally giggle-inducing. But the scenes intended to be poignant, such as Holly's interactions with her late husband's spirit, were laughably pitiful.

It is impossible to sympathize with the main characters in the film. Holly is too sappy and melodramatic – her only virtue is her excellent taste in shoes and clothes, Gerry's happy little Irishman gig becomes irritating after two seconds and Holly's friends are humorous but unappealing as two catty and materialistic women. The only likeable character in this movie is bartender friend Daniel. Due to a mental disorder, Daniel is always honest, oftentimes rude, and Connick does a commendable job blurting hilarious yet uncalled for comments while maintaining some charm.

P.S. There are only two good points about this movie: the comedy and the costume. Sadly, they are not good enough to turn this tedious, two-hour tearfest into a worthwhile chick flick.

"P.S. I Love You" is rated PG-13 for sexual references and brief nudity and is playing in area theaters.