English teacher Michael Horne grew up a well-rounded child in Connecticut. He had one sister and played a little of every sport and played the accordion. Since then, his interests have changed, but his well-roundedness has remained as one of his best qualities. 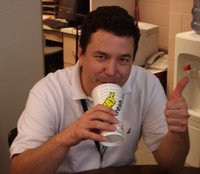 Horne's original intention was to teach only English, but he gradually picked up other courses over the years. He currently teaches English, Literature as Film and SAT Prep. Horne founded the Lit as Film class at Blair and wrote the curriculum himself three years ago. He picked up SAT prep when a replacement was needed, and since he had some experience student teaching the math section of SAT prep at the old Blair, he agreed to teach the class.

Horne attributes his choice to become a teacher to his twelfth grade English teacher. Horne found that his teacher's ability to make connections with things outside of books, such as movies and TV shows, showed the possibilities of making English interesting and creative. "He showed how English isn't just some dusty old book," Horne says.

A teacher who started his eight-year career at Blair, Horne finds his favorite part of teaching is his students. "I love the creativity of teaching; everyday is different," he says. "The lesson you plan out never turns out the way you think it will." Although Horne loves leading class discussions, he hates grading assignments.

Horne attended public school through middle school, and then left public high school to attend Fairfield Preparatory School. From there he attended Scranton College where he majored in English and business management.

Horne has many interests outside of teaching. He's played ice hockey for eight years, and his team has been invited to the national championships in Toronto three times. They've attended twice. "The time we didn't go, there was that whole SARS thing and we were sort of like, 'Hey, lets not do that.'"

Horne also has a musical side to him that many people are unaware of. As a child, he played the accordion for seven years. Aware that his hobby was more unusual than most, Horne explains, "That's just what you do when you're from a Slovak household!"

Since then, Horne has picked up a new instrument, the guitar, and usually just "messes around." Horne also met Hootie and the Blowfish in college when they came to perform and recognizes it as one of the high points of his young adulthood.

In addition to Horne's busy teaching schedule and hockey games, Horne has another obligation as Blair's girls' varsity lacrosse coach. Coaching the program for as long as it's been at Blair, Horne finds coaching to be one of his true passions. "It's the one thing I would never give up," he says. Horne says he looks forward to each spring when tryouts start. "Although it's stressful," Horne says, "It's my favorite part of the year."