A different kind of sport

As junior Margaret Sullivan canters around the ring at Meadowbrook Stables in Chevy Chase, her bright orange blazer stands out against the clear morning sky. Sullivan leans forward in the saddle, fearlessly urging her horse to take longer strides towards the looming jump. As they arc over it, Sullivan shortens her hold on the reins and rises from the saddle. They land smoothly on the other side and canter on as if nothing had happened. Slowing to a trot, Sullivan reaches over to pat her horse's sweating neck, a large grin lighting up her face. 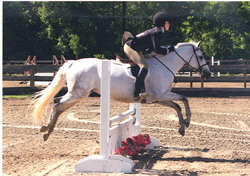 Sullivan entered this world of mud and leather when she was seven years old and lived in England for six weeks. With a farm right down the road, her love for horses was given room to grow. So when she returned to Takoma Park, Sullivan began taking lessons at Meadowbrook, never looking back. "Horseback riding's a bond between a human and an animal unlike any other," she says. "You're asking an animal to do something and they're willing to respond."

Amidst the sprawling suburbs of Silver Spring, only a few Blazers are given the opportunity to form such a personal bond with such a large animal. According to an informal poll of 100 Blazers taken during 5B lunch on March 21, only 30 percent of Blazers have ridden a horse more than once. Those who do get the chance to ride often not only form lasting relationships, but they also learn responsibility and develop a motivation to work for what they desire.

Working for what you love

This opportunity comes with a high price, though. With the cost of twelve lessons averaging a pricey $400, horseback riding is certainly not accessible to every income level. "Horseback riding costs so much money," emphasizes sophomore Sophia Kline, who has been riding for seven years. "It's not even the buying of the horse or paying for the lessons; it's the buying of the pants, the boots, the helmet, the crop, the spurs. There's nothing cheap at all about horseback riding."

In order to make their hobby more affordable, some horseback riders resort to working to help pay for their lessons. Don Christie, the manager of Wheaton Park Stables, feels that working at a barn provides the rider with additional experience around horses. "You get a lot more experience when you work," says Christie. "You get to see both the failures and successes of the barn and the way things work."

During the summer, Kline works for her instructor, also the owner of the barn, in exchange for lessons. For every four hours of work, Kline gets one private lesson, which normally costs about $35 for an hour. "One of the jobs I had to do," says Kline with a reminiscent laugh, "was muck out the paddocks, which is the worst job in the world." Mucking out, or cleaning a horse's enclosure of manure, is one of the many physically demanding tasks that are a part of the equestrian's life.

Sophomore Ashley Speer, who owns her own horse, has an even greater demand on her time than those who just take lessons. Speer works two times a week at Wheaton Park Stables so that she can afford to keep Lad, her quarter horse, there. Although she does not get a reduction on her board, the money she earns working goes towards paying for it —$500 per month.

Speer bought Lad last August, using her own money. He cost her $3500, but the price was worth it. "I kind of just fell in love with him," Speer says with a smile. "For a few years I was like, 'I'd really like to buy him, but that's really not going to ever happen,' but, hey, now he's mine."

Shortly after buying Lad, Speer realized just how different taking lessons are from owning a horse. "It's a lot more responsibility," says Speer. "I have the choice to ride more, but I also have to work to support him."

Besides demanding responsibility when it comes to caring for the horse, owning a horse also puts a greater strain on Speer's schoolwork. She feels that the responsibility that comes with owning a horse can also spill into her schoolwork, both negatively and positively. "I get really tired and sometimes don't do my homework," she says, "but it gives me a motivation to get through that so I can go see my horse."

Not only does owning a horse affect her schoolwork, but she also feels that there is a strain on her ability to compete. "I ride for pleasure right now — I just don't have the time to devote to competing," she says. "I'm thinking about [getting back into] competing, though."

Going for the gold

Sullivan, who has competed in Hunt Seat Equitation — the rider is judged instead of the horse while they go through different gaits and over jumps — for six years, estimates that she has participated in approximately 80 shows and plans to go to many more. "A show is just your time to take everything you've learned and go out there and do it," she says.

Depending on what discipline the rider competes in, horse shows are judged differently. Dressage, one discipline in horseback riding, is judged a lot like figure skating, with the horse and rider being evaluated on how well they execute certain techniques. Jumping, like dressage, is judged using a point scale with points being deducted for time faults and failing to clear jumps. Most horse shows also have pleasure classes which judge how well the horse and rider work as a team.

Kline, who rides dressage, is planning to begin showing in the spring. "I'm beginning with the easiest test so I can get used to showing," she says. "Showing is just one more way to see how I'm doing."

Besides the training involved, a lot of work is put into preparing for a show. Both horse and rider are expected to look neat and professional at a show, so the rider spends the day before the show grooming — or cleaning — the horse. The day of the show they are at the barn early in the morning, sometimes as early as four, and do not return from the show until late at night. "Basically going to the barn, especially on a show weekend, is being at the barn all day," Sullivan says with a laugh.

Unlike most sports, whose seasons are often limited to a couple of months per year, horseback riders' show seasons continue year round except for winter. The fact that horseback riding involves a living animal, though, means that the work never really ends.

But for Kline, who gets upset when people question the athleticism of horseback riders, cannot understand how people can say it is not a sport. "Saying horseback riding isn't a sport is like saying ballet or basketball isn't a sport," says Kline. "You have to be strong, you have to work out and you have to stay fit. I don't get why people say otherwise."

For Sullivan, she judges the athleticism required for horseback riding by her experiences with other sports. "I know horseback riding's a sport because I get sore when I do it," Sullivan says with a shrug. "I'm also a goalkeeper, so it helps me with my balance. Plus it's in the Olympics, so I guess that makes it a sport."

According to Cherry Hill, author of "Becoming an Effective Rider," horseback riders have to develop strong thighs, abdominals and glutes in order to support themselves in the saddle. Along with the muscular benefits, horseback riding burns around 250 calories per hour according to NutriStrategy, which does not include the 300 or so calories burned grooming the horses and working around the barn. "There's always an athletic prowess involved in horseback riding," says Christie. "It's a recreational sport, but it's also good exercise."

It's all worth it

While horseback riding requires a lot of work, the rewards are worth all the effort according to Kline. "When I'm riding I'm completely focused," she says. "Horseback riding is just like a dance, you're connected to the horse like two dance partners are."

Equestrians form bonds with horses that are similar to those formed with people in the sense that the horse's personality must coincide with the human's in order for the relationship to grow. "The thing about horseback riding," says Christie, "is that it'll last. You can be around horses for as long as you want to be."

Not only does horseback riding forge lasting relationships between horse and rider, but human friendships are also born from sharing a common interest in horses. "Almost all my friends are from the barn," says Sullivan. "The dynamics of the sport are so different because you form strong bonds with everyone."

Between their love for horses and the work they do for their hobby, equestrians end up spending a lot of time at the barn, which helps develop these friendships. Although Kline wishes she had more time for non-equine activities, but she never regrets her involvement in the horse world. "Horseback riding gives me something to look forward to," says Kline. "I know it's corny, but it makes me feel free."


Mary Donahue. Mary Donahue is an 11th grade, vegetarian Honors student who is addicted to sugar. Whatever free time she can find is quickly swallowed up by Doback, "her" horse, or her crazy friends, with whom she scares mortals. She isn't happy unless she is moving, which … More »