Director Genndy Tartakovsky is back with another adventure with Count Dracula (Adam Sandler) and the whole gang in Hotel Transylvania 3. With the same humor and heart as its prequels, it's a nice addition to the franchise, although certainly not necessary. Hotel Transylvania 3 is of the exact same subpar quality as its predecessors.

This time, the monsters embark on a family cruise after Mavis (Selena Gomez) misinterprets Dracula's loneliness for work-induced stress. But things take a turn for the worse when Dracula falls in love with the human captain of the cruise, Ericka (Kathryn Hahn), who turns out to be the great granddaughter of a legendary vampire slayer. Here begins the adventure as man meets monster in this "frankly unremarkable" sequel. 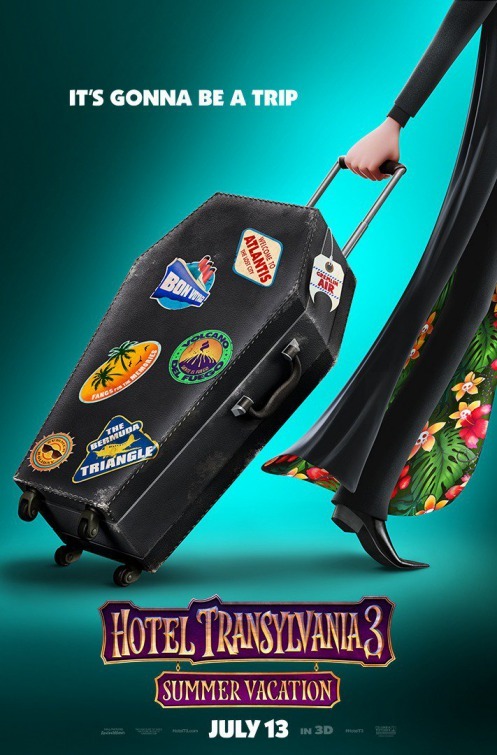 The voice acting is done generally well; Adam Sandler brings the same quirky personality as Dracula, while Kathryn Hahn is a welcome addition, bringing her character to life. While nothing exceptional, the actors know enough to give a convincing performance, unlike other animated movies where famous actors with no prior experience are cast just to pull viewers in.

Luckily, if a joke doesn't work, the movie doesn't linger on it too long. Most of the jokes prompt a small chuckle from the audience, but there are a couple recurring ones that fail, such as the one where three old witches are checking Dracula's father (Mel Brooks) out.

To top that, the plot feels contrived, with a whole new, legendary vampire slayer who was never even mentioned in the first two movies but who's apparently been hunting Dracula for centuries.

The film offers a nice contrast to its prequels, exploring how kids feel about estranged parent dating. Mavis feels uncertain with the idea of Dracula being with Ericka, whereas Dracula was opposed to Mavis' relationship with Johnny (Andy Samberg) in the first movie.

While the soundtrack of this film adds a nice dose of pop to the scenes, the animation is subpar. In the first two films, the animation lent the characters vivid personalities and helped sell the gags with over-exaggerated poses and expressive faces. In this film, however, the characters no longer have unique physical personas.

In addition, there are many scenes where different animations could have added a creative twist. For example, point-of-view shots during the fight scene between the monsters and the giant octopus could have really spiced things up, but the animation just stays flat.

A major concern with this movie is how the previous rules of the franchise are overturned. In this trilogy, monsters can 'zing' with their true love, but it can happen only once in a lifetime.

In this movie, however, Dracula zings with a second person, conflicting with the original rule regarding zings. This break in lore takes away from the franchise but does not greatly diminish the overall quality of the movie.

would best be enjoyed by a bunch of kids on a lazy afternoon with nothing to do, just like its predecessors.