With a potential immigration law passing the Senate and moving to the House of Representatives, Republicans' vote will have an even greater meaning than granting rights to millions of immigrants; it will also demonstrate whether they are ready to leave their personal right-wing opinions behind and move towards building their party. If the Republican Party wants to win the next presidential election, it is essential that they pass the Senate's bill. The GOP has to stop focusing solely on keeping immigrants out and more on how they will help the potential voters already in the country. 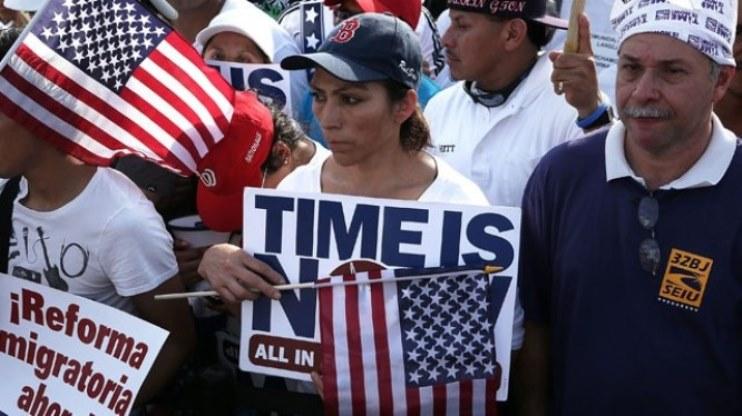 Last month, the Senate debated a comprehensive immigration bill that passed overwhelmingly, with 68 senators voting in favor of the bill and 32 voting against it. The bill covers a variety of issues relating to immigration, including, tightening border security and offering a 13 year path to citizenship for millions of undocumented immigrants, instead of the limited opportunities currently granted to them. Now it is up to the House of Representatives to decide the fate of these immigrants, who come from all over the world including India, the Philippines, China and most commonly, Mexico. It is imperative that the House pass the Senate's bill, in order to fix the broken immigration system in this country.

The Senate's legislation could help the close to 11 million undocumented immigrants already in the USA and those wanting to enter. Currently, there are not many options for undocumented immigrants. This bill enables those immigrants living in the US since December 2011 to apply for Registered Provisional Immigrant Program, a green card and eventually citizenship. The bill also includes a version of the DREAM Act. People brought to the US as children would be eligible for the green card in 5 years and citizenship soon after. In addition, the increase in population would boost the economy because they could create successful businesses which would lower unemployment enormously. In addition, according to an analysis from Gordon Gray, the director of fiscal policy at the American Action Forum, the bill's policies will save the country $410 billion over the next 10 years. He explains that when the millions of undocumented immigrants are granted their rights, they will, most likely, in turn make money of their own.

Conservatives in the House of Representatives have made it clear that their number one priority is keeping undocumented immigrants out of the country. So far, the House Judiciary and Homeland Security Committees have approved five pieces of immigration legislation, none having to do with creating a path to citizenship. They are correct that border security is an important issue, but the Senate's bill actually makes huge investments in the House Republicans top concern: lowering the flow of illegal immigration into the United States. First of all, the Senate's immigration bill will add at least 38,405 full-time border patrol agents along the Mexico- US border, in addition, to the more than 19,200 agents currently there. The bill also promises to install at least 700 miles of fencing, increase mobile surveillance and increase prosecutions of illegal border crossings, in addition to the many other huge investments border security. This bill states realistic solutions to Congressmen's number one priority; all they have to do is take the action to pass it.

The Senate's bill also deals with legal immigration. It's very specific about immigrant visas and includes exceptions for highly skilled immigrants in STEM (Science, Technology, Engineering and Math) fields. One of the pieces of legislation that the House Judiciary and Homeland Security Committees have passed, the SKILLS (Supporting Knowledge and Investing in Lifelong Skills) Visa Act, is very similar to that part of the Senate's bill, granting temporary-residency and priority to those with exceptional ability in STEM fields. Unlike the SKILLS Act, in addition to helping skilled workers, the Senate bill creates a path for citizenship for lower-skilled workers, families of immigrants and immigrants already in the US. This legislation is more comprehensive dealing with all aspects of the immigration system.

The irony of the situation is that if Speaker John Boehner called a vote on the bill, it will most likely pass. It is supported by enough Republicans and Democrats in the House to pass the bill. According to a study done by the Huffington Post, based on lawmakers' past votes and public statements, 191 Congressmen are likely to vote in favor of the bill and 108 are likely to vote against it. According to the study, there are currently 135 Congressmen who are still undecided, 11 of who are Democrats. Assuming all of the Democrats vote in favor of the bill, only 12 other Republicans would have to vote yes for the bill to pass successfully. However, many extreme conservatives who are in fear of being challenged by members of their own party are pressuring Boehner to, strike down the bill. Boehner stated in a weekly address that he will only call a vote on a bill that has the support of at least half of his party, but this strategy only creates more gridlock within Congress and does nothing to increase support from the Democratic-leaning minorities.
In order to strengthen their national party, win presidential elections, and help the millions of immigrants in the USA, the Republican Party desperately needs to pass the Senate's immigration bill. The bill is popular among minorities, tightens borders and promotes the Democratic process, all of which the Republicans claim they support.