It wasn't much. In one corner of the tiny apartment was a hidden bedroom door; in the other, the open entrance to a bathroom. Surveying her prospective home, English teacher Pam Bryant was not impressed. But when she learned that the apartment was selling for $80,000 more than it had been only one year before, Bryant knew she couldn't afford it, and gave up hope of purchasing a place in Montgomery County.

"Oh my God, it was a nightmare!" she exclaims. "I don't know which teacher, which person, would pay that much money for a tiny little one bedroom, one bath condo.”

Bryant, who now lives in Prince George's County, is not the only teacher who was unable to afford a home in the county where she works. Over the past three years, Montgomery County home values have shot up to a record 69 percent, according to a Jan. 6 article in The Washington Post, leaving many teachers no option but to search outside the county for a place to live. Yet even as experts claim that MCPS will lose quality teachers because of the conflict between stagnant teacher salaries and housing costs, many of Blair's educators remain drawn to the school system. 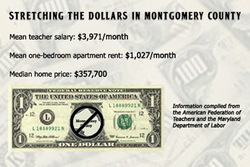 Photo:
"They're really out of luck”

Although she finds her daily ride to Blair tedious, Bryant's half an hour on the road doesn't compare to foreign language resource teacher Joseph Lynch's lengthy commute. Every morning, Lynch groggily rises at 5 a.m. to the sounds of his two infant children crying across the hall. In 30 minutes, he showers, eats, kisses his family goodbye and hits Interstate-270 for the up to two hour long drive with traffic from Frederick to Blair. He looked all over Montgomery County when he was buying years ago, but couldn't find a place to suit his modest income.

"Maybe we could afford a house [in the county], but there would be no curtains on our windows,” he says with a chuckle. "We got so shocked by prices that we couldn't possibly live here.”

Lynch is one of the many victims of a countywide surge in housing prices. County Councilman Steve Silverman, who is the chairman of the Planning, Housing and Economic Development Committee, acknowledges that middle-income public servants like teachers face a difficult task in locating suitable in-county housing. "Teachers, they're really out of luck. People making income twice as much as teachers are having a hard time finding housing in the county,” Silverman says.

Silverman says the county is attempting to help teachers find housing. A program featuring "moderately priced dwelling units” has been in place since 1976 to randomly select applicants from a pool of middle-income professionals to award with affordable, quality housing.

Still, housing prices have become so high that the county will inevitably lose quality educators, says Silverman. "It's going to be harder for us to recruit and retain the high quality teachers that make our system so great,” he says. The effects have already trickled down to Blair: English resource teacher Vickie Adamson says that four potential candidates turned down jobs in her department in the past year due to the county's high housing costs.

Half of a paycheck

Quality teachers are hard to come by when they are not willing to be what English teacher Adam Clay calls "house poor,” defined by the National Housing Conference (NHC) as having to spend over 30 percent of each paycheck on either rent or a monthly mortgage to purchase a home. This makes the unit technically unaffordable to that buyer.

Clay, who lives in Montgomery County, says that he is unwilling to pay a high rent, and thus lives with a roommate to split the cost. While renting with a roommate eases the financial burden so that Clay has enough money to go to the movies once in a while, personal problems have also arisen. "Let's just say living with other people can be problematic,” Clay says.

For social studies teacher Amy Thomas, who also lives in Montgomery County, living alone was a higher priority than having discretionary income. After a year of coming to school exhausted due to her roommate's habit of staying up late, Thomas decided it was time for a change.

Now, Thomas makes monetary sacrifices and coughs up what she estimates to be half of each paycheck on rent, a rent she "cannot afford,” according to the NHC. Thomas, who last year lived with a roommate and owned no furniture other than a bed, purchased her current fittings from a fellow Blair teacher at a slashed price to save cash. During the summer, when teachers aren't paid, Thomas often finds herself turning to her parents for financial support.

On average, single-income teachers who rent a one-bedroom apartment in the county would forfeit 27 percent of their income to housing costs, according to the Maryland-National Capital Park and Planning Commission (M-NCPPC) and the Maryland Department of Labor, Licensing and Regulation. That is a figure dangerously close to the NHC limit of 30 percent, says Krishna Akundi, a senior planner at M-NCPPC. Factoring in taxes, housing in the county becomes nearly impossible to afford for middle-income earners without a roommate or some outside help, according to Akundi.

A fruitless search for housing forced Sarah and Cate Kastriner, two former Blair English teachers in a committed relationship, to leave MCPS. They now live in a house in Yorklyn, Delaware that Sarah Kastriner says would cost $800,000 if it were in Montgomery County.

When Sarah Kastriner became pregnant with a baby girl, the two knew they would need more spacious accommodations. The decision to leave was a wrenching one. "If we had been able to find something we liked and could afford [in Montgomery County], we would still be at Blair teaching,” says Sarah Kastriner. "It was very emotional for us and our colleagues. Mrs. Adamson broke into tears when I told her I was going,” she adds.

Cate Kastriner fondly remembers her years at Blair, but admits that staying in the county with rising housing costs was not a reality. "It was really hard to leave this little cluster of people we were close with,” she says, "but even when we started looking at houses with postage-stamp sized yards, living in Montgomery County was out of the question.”

So when Sarah Kastriner's parents offered the fledgling family the home in Delaware at a low mortgage, the Kastriners readily accepted.

Lynch has decided to stay in part because he likes the political climate in Montgomery County, as opposed to the one in which he lives. "I prefer the culture here in Montgomery County. I prefer the liberal perspective. It's really close to reactionary in Frederick,” Lynch says. He adds that he enjoys the diverse student population, which he hasn't found in Frederick.

In his second year of teaching following a stint in business, Clay is impressed with MCPS' superior treatment of educators. "[MCPS] gives a lot of support to teachers, and teachers have a strong union. They actually take care of their teachers,” he says. "I think they do the best of what they can, and I'm happy with Montgomery County even though it's going to be hard to find a place to live.”

Kiran Bhat. Kiran Bhat is a senior who loves the Washington Redskins, 24, Coldplay, Kanye West, Damien Rice, Outkast and Common (Sense). He aspires to be the next Sanjay Gupta. He will miraculously grow a Guptaesque telegenic face and sculpted body by the age of 30. In … More »