How many mass shootings in the U.S. must we see before action is taken?

To prevent these shootings, the U.S. needs to take action by implementing mandatory universal background checks, assault weapon and large magazine bans. In addition, red flag laws— laws that allow law enforcement to remove guns from people who pose a threat—and prohibitions against owning firearms for individuals with domestic violence records are necessary to prevent guns from getting into dangerous hands. 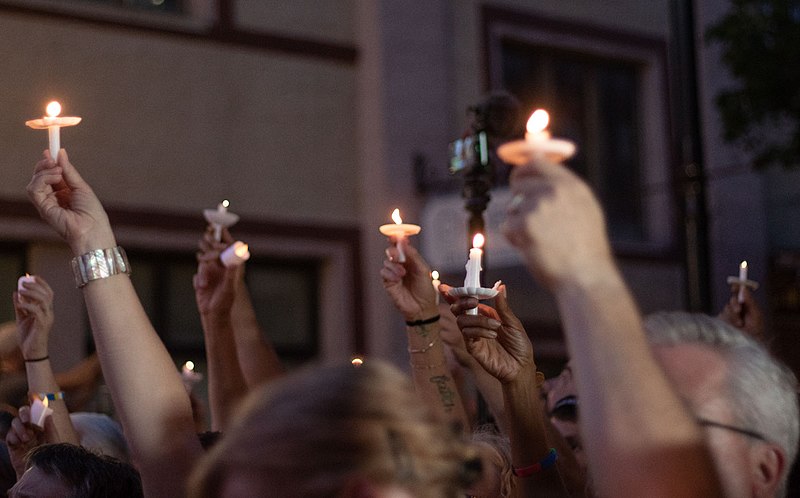 Photo: People of Dayton, Ohio honor the victims of the Aug. 4 shooting with a vigil. (Courtesy of Wikimedia Commons)

Photo: People of Dayton, Ohio honor the victims of the Aug. 4 shooting with a vigil. (Courtesy of Wikimedia Commons)

In June, the NRA criticized a Colo. ban on certain magazines, stating that magazine size doesn't affect public safety. In the Dayton shooting on Aug. 4 that killed ten and injured 27, perpetrator Connor Betts used a firearm that employed a 100-round magazine. He was able to shoot 100 bullets before needing to reload his weapon. Such weapons that can quickly fire several bullets without reloading are very common in mass shootings, but should not be available for mass use.

A lot of gun control opponents argue that the Second Amendment allows them the right to own guns for sporting and protection. When the Second Amendment was ratified in 1791, most guns had a one-bullet magazine and could fire three rounds per minute with a 50-meter accuracy range. The AR-15 style rifle (the firearm used in Parkland, Fla. and other recent shootings), in contrast, fires about 45 rounds in a minute and has an accuracy range of 550 meters. People do not need a gun with these capabilities for protection or hunting.

The Second Amendment needs restrictions in the interest of the American people. The First Amendment limits the right to free speech when it presents a clear and present danger to other people. Similarly, restrictions should be imposed on the right to bear arms to keep people safe from gun violence.

In 1994, President Bill Clinton passed a ban on the sale and use of 19 specific assault weapons and large capacity magazines. While the ban was in effect from 1994-2004, there were 17 mass shootings. In comparison, the United States had its 17th mass shooting of 2019 alone on Jan. 19. In the Columbine shooting, one of the major shootings during Clinton's presidency, high school shooters used guns acquired illegally and without background checks. Mandatory universal background checks would ensure that every firearm seller performs a background check on the buyer before giving them the gun, and would reduce the number of people killed by gun violence.

According to The Washington Post, just five states have red flag laws and just seven states have relinquishment laws, which require prohibited individuals to turn in their firearms. States that have these laws, such as Oregon, California, Connecticut, Massachusetts and New York, have very few shootings and minimal death by guns. It's no coincidence: preventing guns from getting in the hands of dangerous and violent people leads to fewer shootings.

People who have had a domestic violence or assault charge shouldn't be allowed to own guns because they may end up using the firearm in a harmful manner. Those who pose a danger would be detected in a background check and prohibited from purchasing a firearm. "Gun laws need to be more strict, with the need of background checks to make sure the person in hold of the weapon is stable enough to carry a gun without creating harm," junior and Blair4Change president Maceda Berhanu said.

Blair4Change is an organization that plans walkouts, mobilizes students and confronts the biggest issues of our generation. "Within just mass shootings, there have been more mass shootings than days so far this year with about 300 mass shootings in the U.S. This year Blair4Change is planning a panel discussion and a visit to the Capitol Hill to open the eyes of gun violence and gun control to many people," Berhanu said.

It's simple: if we want to reduce the number of mass shootings, we need to change our laws.