How to trade a paperclip for an Xbox

Bringing back the barter system on Blair Boulevard

What ever happened to the barter system? During Colonial America, when the states lacked a shared form of currency, people traded goods and services to get what they needed. A little research into modern instances of bartering leads to a Montreal man who traded his way from a red paperclip up to a house. We decided to prove that Montreal ain't got nothing on Blair. 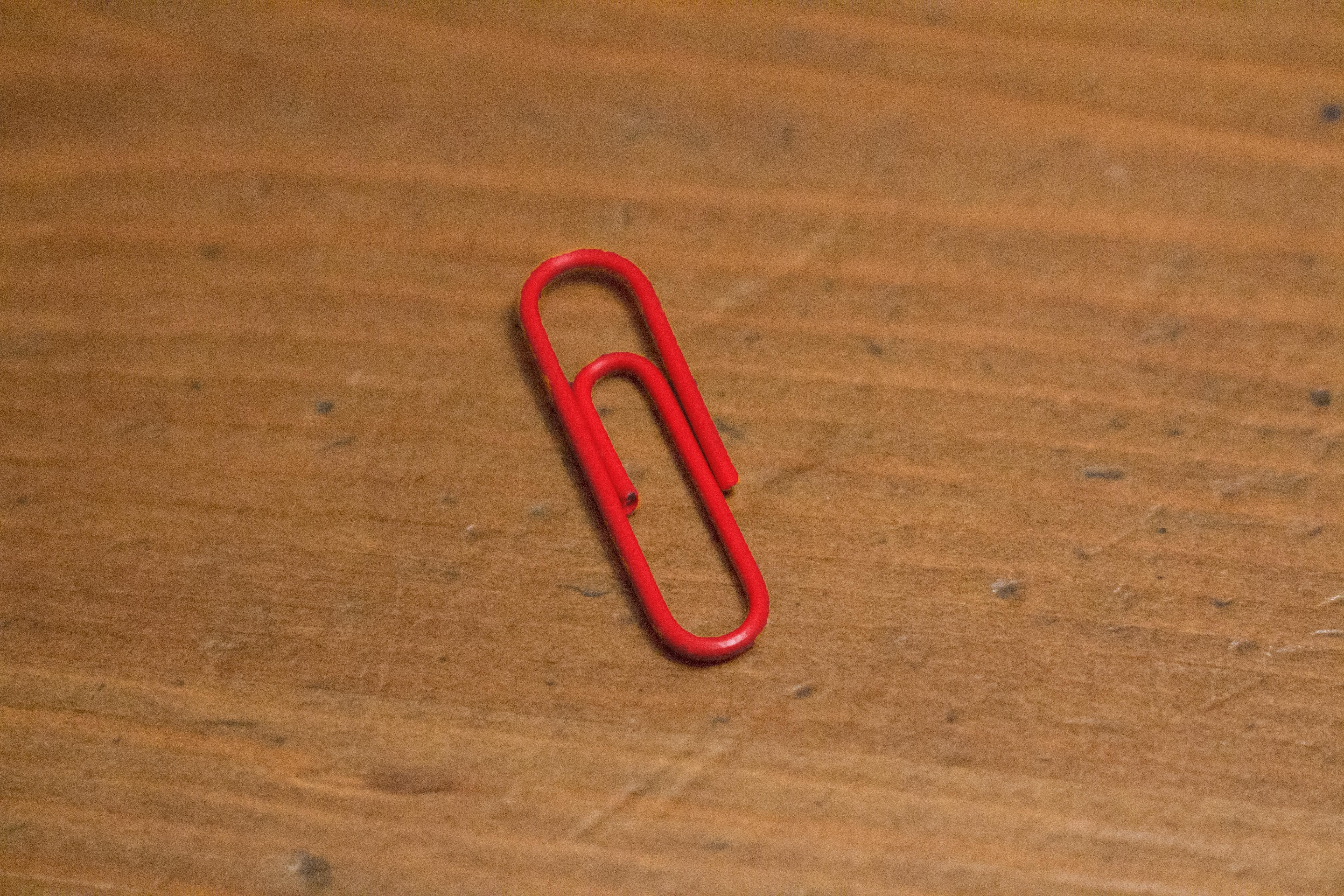 Photo: We started with a red paperclip and traded it for a mechanical pencil.

Photo: We started with a red paperclip and traded it for a mechanical pencil. Photo courtesy of Abigail Landesman.

Starting with the very same red paperclip on a Monday morning before school, it was easy to find an initial trade. Senior Abeselom Gebreyesus was sitting outside the SAC and unwrapping a new pack of eight multicolored mechanical pencils. In the interest of getting the trading going, he took the paperclip in exchange for one of them. 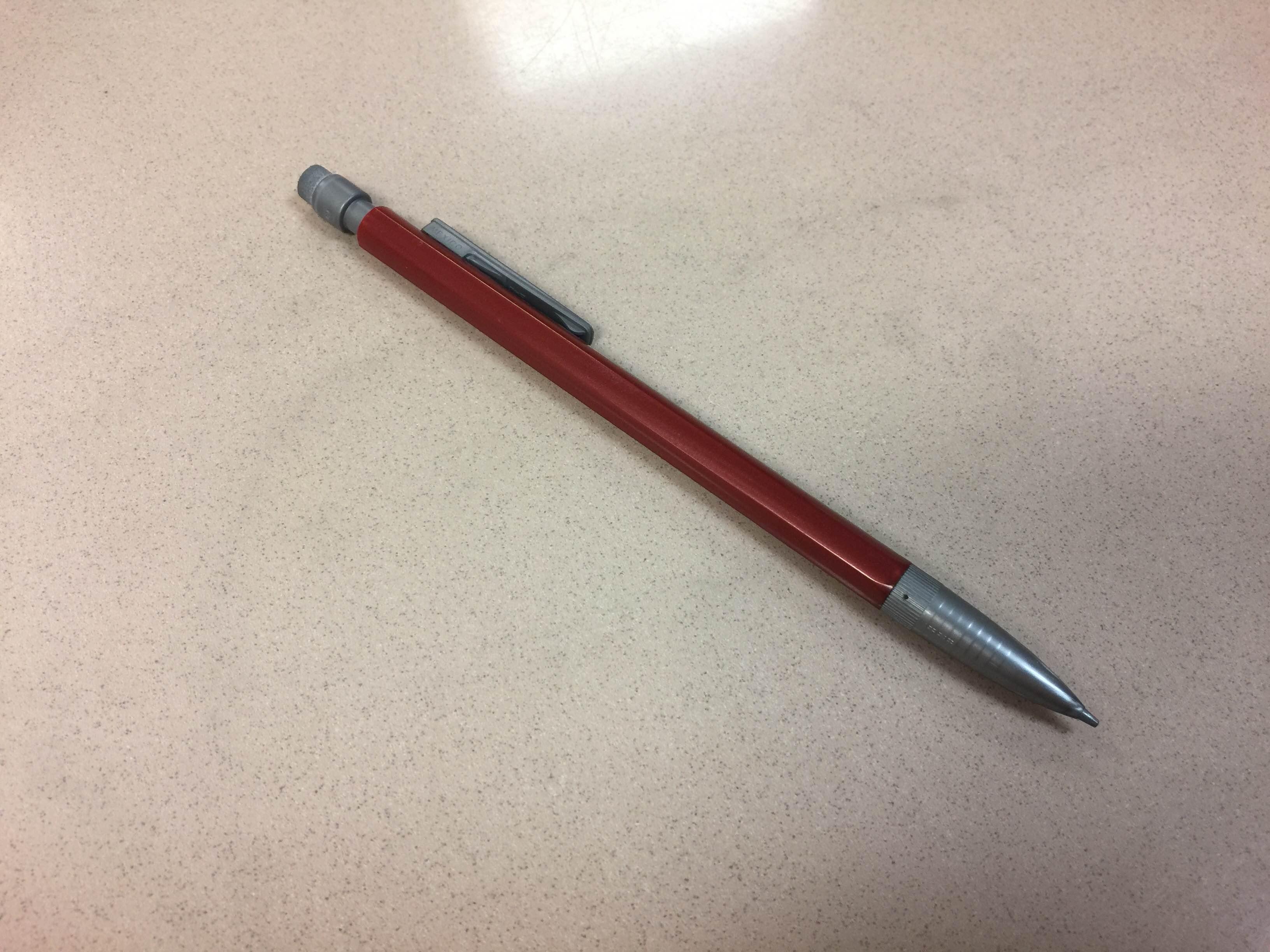 Photo: The trade of the paperclip for this pencil kicked off our story.

Photo: The trade of the paperclip for this pencil kicked off our story. Photo courtesy of Charles Lott.

One period later, the mechanical pencil was gone. Senior Elia Martin was similarly intrigued by the proposition of trading up from a paperclip, and felt like giving the story a jump start. He spent Sra. Coombs' first period Spanish class digging through his backpack, looking for a potential item to trade, and after jokingly offering his sister's running shoes, unearthed a shiny metal slinky. 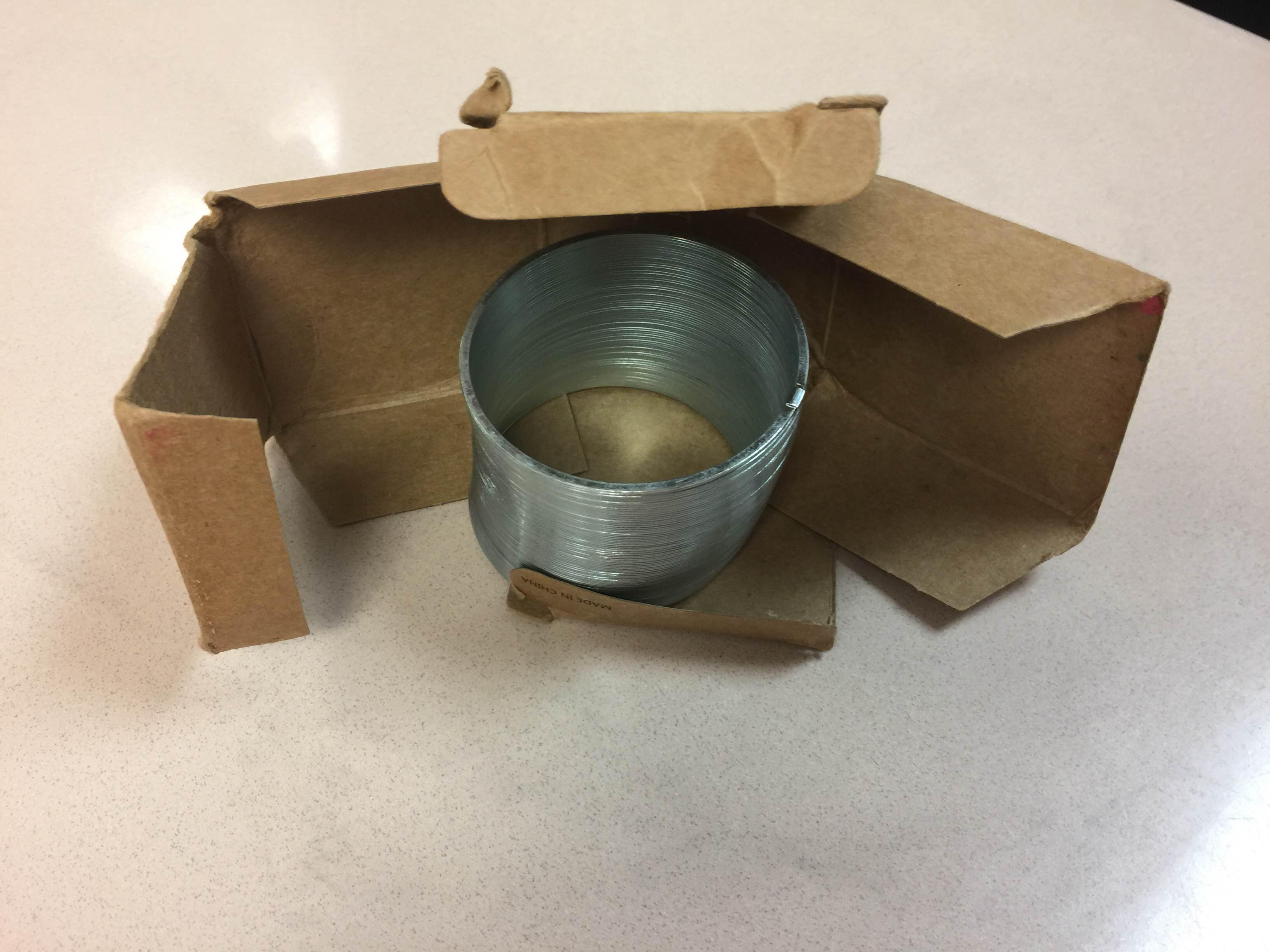 Photo: Senior Elia Martin decided to trade us this slinky for a mechanical pencil. We traded it off for some earbuds.

Photo: Senior Elia Martin decided to trade us this slinky for a mechanical pencil. We traded it off for some earbuds. Photo courtesy of Charles Lott.

The slinky garnered a lot of interest. People offered tattered books, Advil, and a teacher's stapler. The hardest part was keeping people from playing with it; it'd be pretty tough to trade a busted slinky. On the basketball courts during lunch, we finally found the right trade. Apparently, Junior Oluwapelumi Akinpelu has a thing for slinkies. "I love slinkies!" he called enthusiastically upon the toy's unboxing. He left towards the beginning of lunch, but returned in the last few minutes with a pair of black iFrogz earbuds. 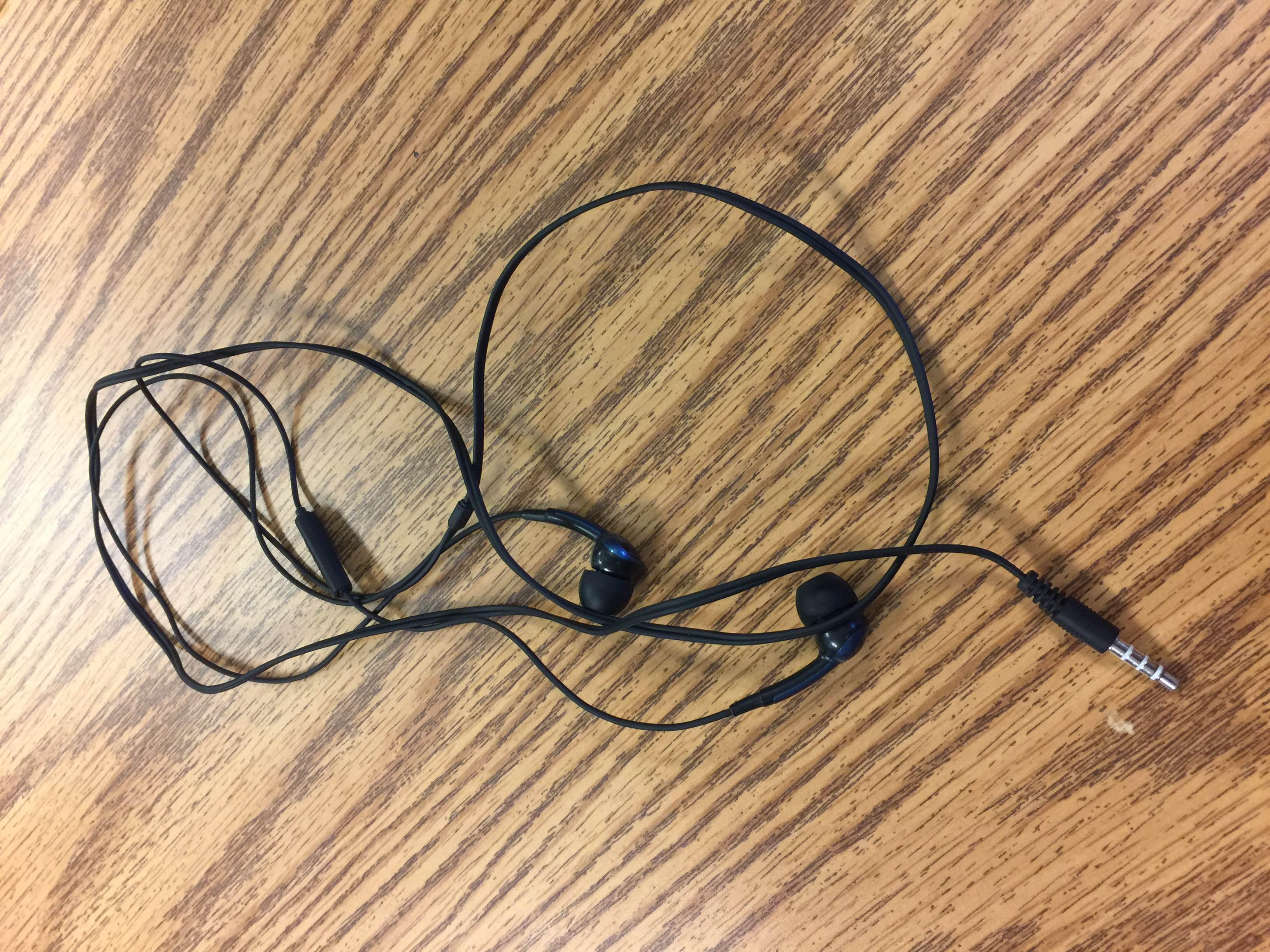 Photo: We traded these earbuds for some Hollister flip flops.

Photo: We traded these earbuds for some Hollister flip flops. Photo courtesy of Charles Lott.

We found a taker for the earbuds almost immediately. Even though most earbuds have a cord that connects them to each other and the phone, people lose them all the time. As soon as the slinky was traded for the earbuds, junior John Carter asked if he could have them, as he had been missing his own pair for over a week. After some back and forth, he offered a pair of almost new Hollister flip flops for the earbuds, nearly a fifteen dollar upgrade. 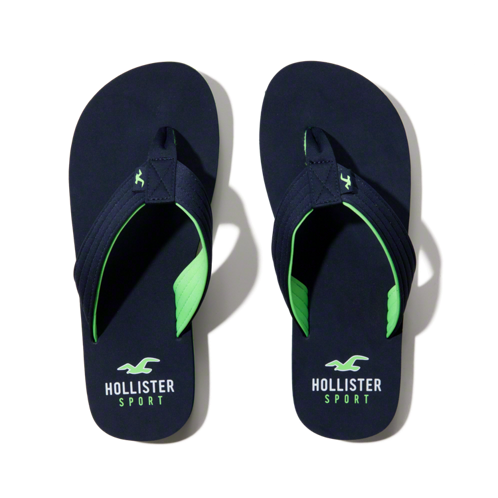 As it turned out, flip flops weren't a wise choice. The difficulty with footwear was that people needed to have the right size feet. Over the course of the next couple days, several students offered trades, mostly jokingly. Several school-owned copies of Hamlet were on the table, along with a couple keychains. Eventually, Senior Cole Sebastian took the shoes for a cheap rubber watch, seemingly a trade down, but for an item that would no doubt be easier to get rid of. 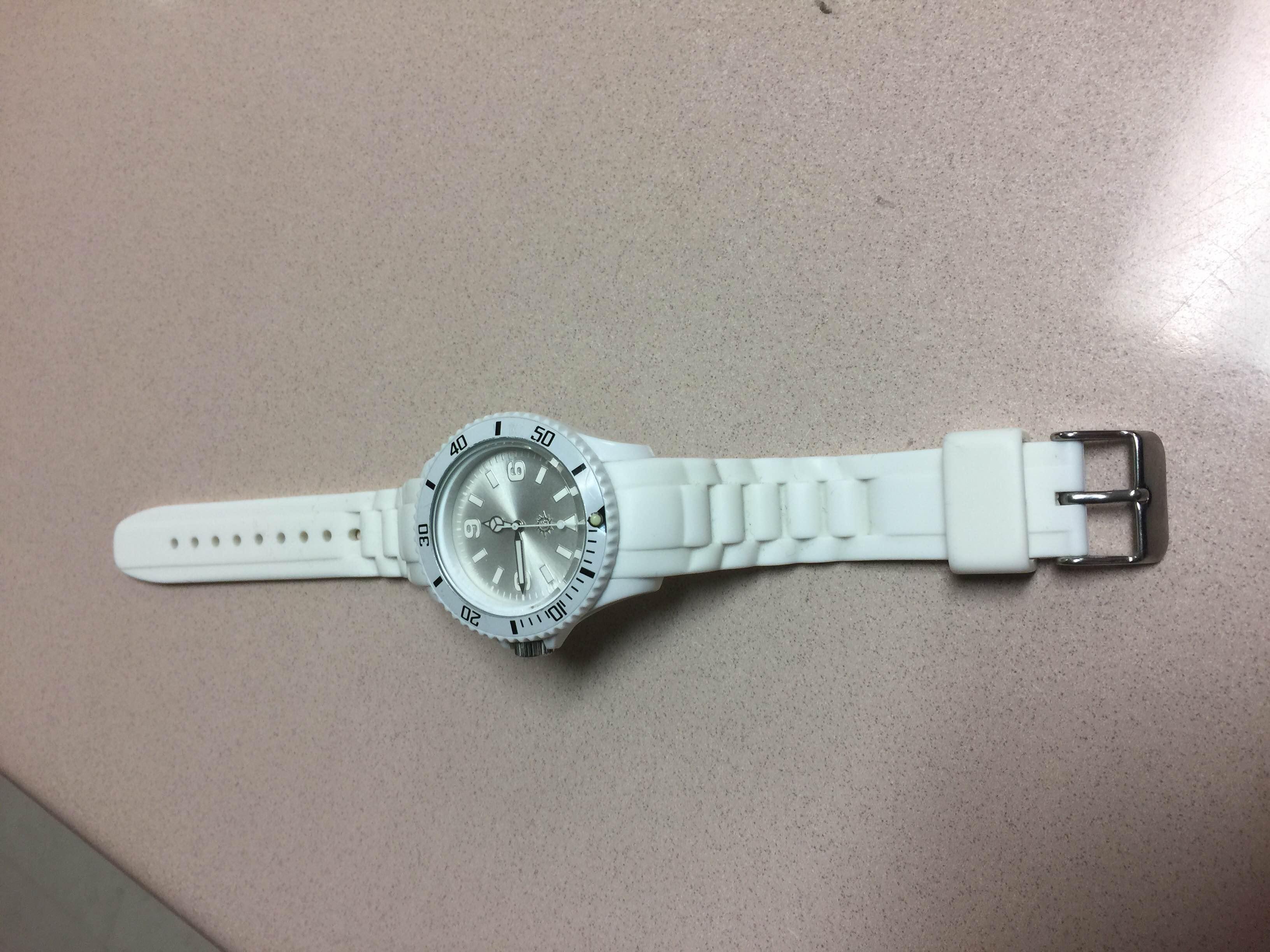 Photo: This (not completely functional) watch seemed like a trade down.

Photo: This (not completely functional) watch seemed like a trade down. Photo courtesy of Charles Lott.

At this point, it was hard to find somebody who had something on them that merited a trade for a watch. Neighborhood listservs became the premier method for trading, as within hours of posting the watch, a local middle schooler offered his old Ripstik, one of those skateboards with two wheels that I could never figure out how to ride. One could say we scammed a kid out of his toy, but the way I see it is that we helped him outgrow an outdated fad. I haven't seen a Ripstik since 2010. 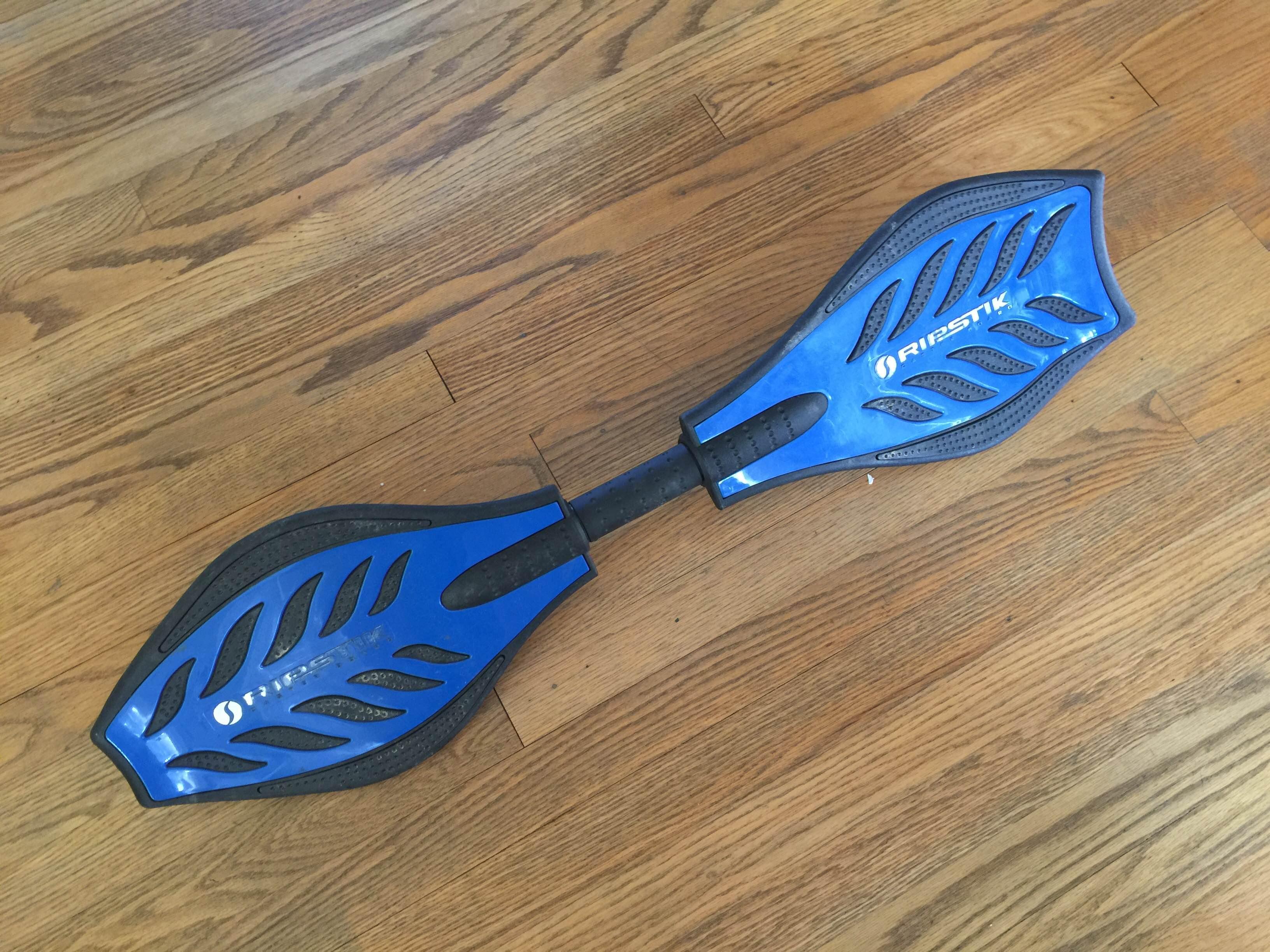 Photo: Several Blazers had fun trying out this Ripstik. We traded it off for a karaoke machine.

Photo: Several Blazers had fun trying out this Ripstik. We traded it off for a karaoke machine. Photo courtesy of Charles Lott.

While trying to find a trade for the Ripstik, lots of classmates tried their best to figure out how to ride it. One especially daring ride through the upper level of the SAC led to the thing almost getting confiscated by Blair administrator William Currence. Senior Grady Jakobsberg used it with enough success in the student parking lot after school that he decided that he wanted it, rummaged around in his attic, and discovered an old portable karaoke machine, still in the box, that he was willing to trade. 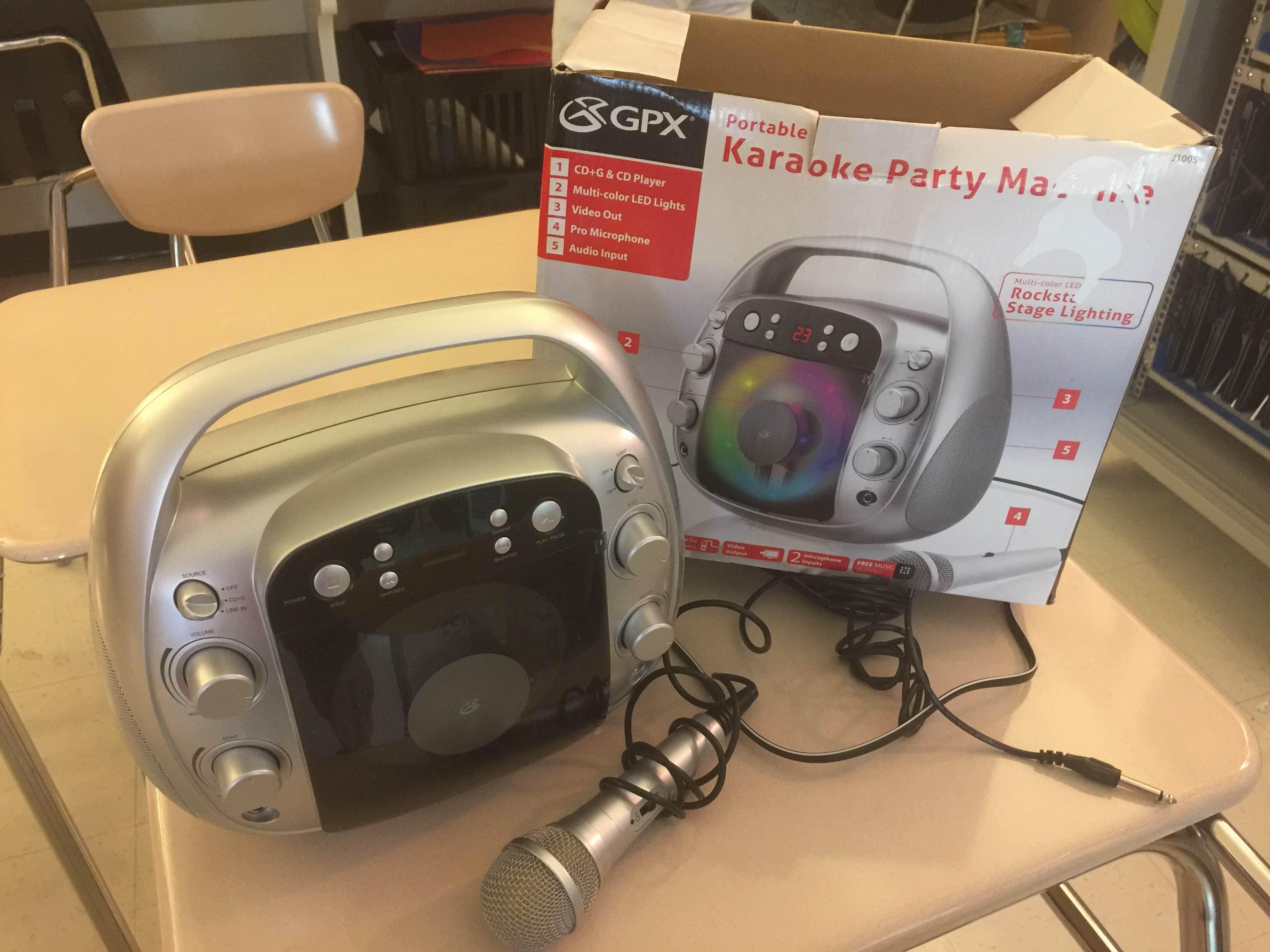 Photo: This karaoke set got us a video camera.

Photo: This karaoke set got us a video camera. Photo courtesy of Charles Lott.

The karaoke machine was a big enough upgrade that people started to take notice of the trading-up scheme. English teacher Sandra Jacobs Ivey almost gave up her life-size cutout of Bruce Lee for the machine, but pulled out upon discovering that the microphone didn't function as advertised. That weekend, during a college visit to New Jersey, a family friend of mine by the name of Bernie Neuner decided that he could part ways with his old video camera in exchange for a lifetime of karaoke fun. 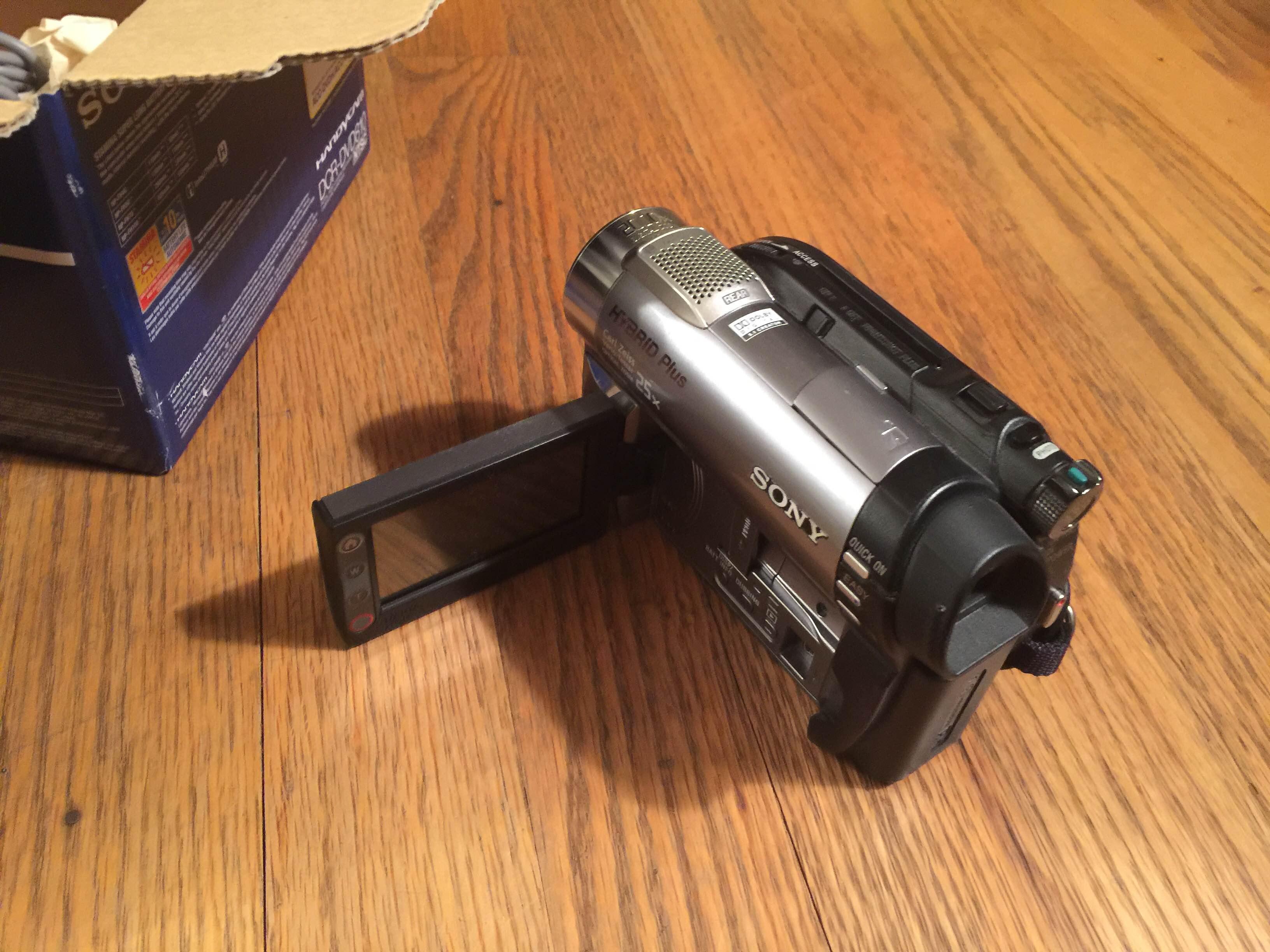 Photo: With this video camera, we managed to get an Xbox!

Photo: With this video camera, we managed to get an Xbox! Photo courtesy of Charles Lott.

The following Monday, people bid on the video camera during lunch. They offered physics textbooks, cleats, and a Blair football away jersey, none of which were particularly appealing in exchange for an expensive piece of electronic equipment. The final offer was a good one: an Xbox 360 with a controller and a copy of Assassin's Creed. Senior Jack Merlo-Coyne had no need for his Xbox thanks to the brand-new PS4 he had just received as a present. 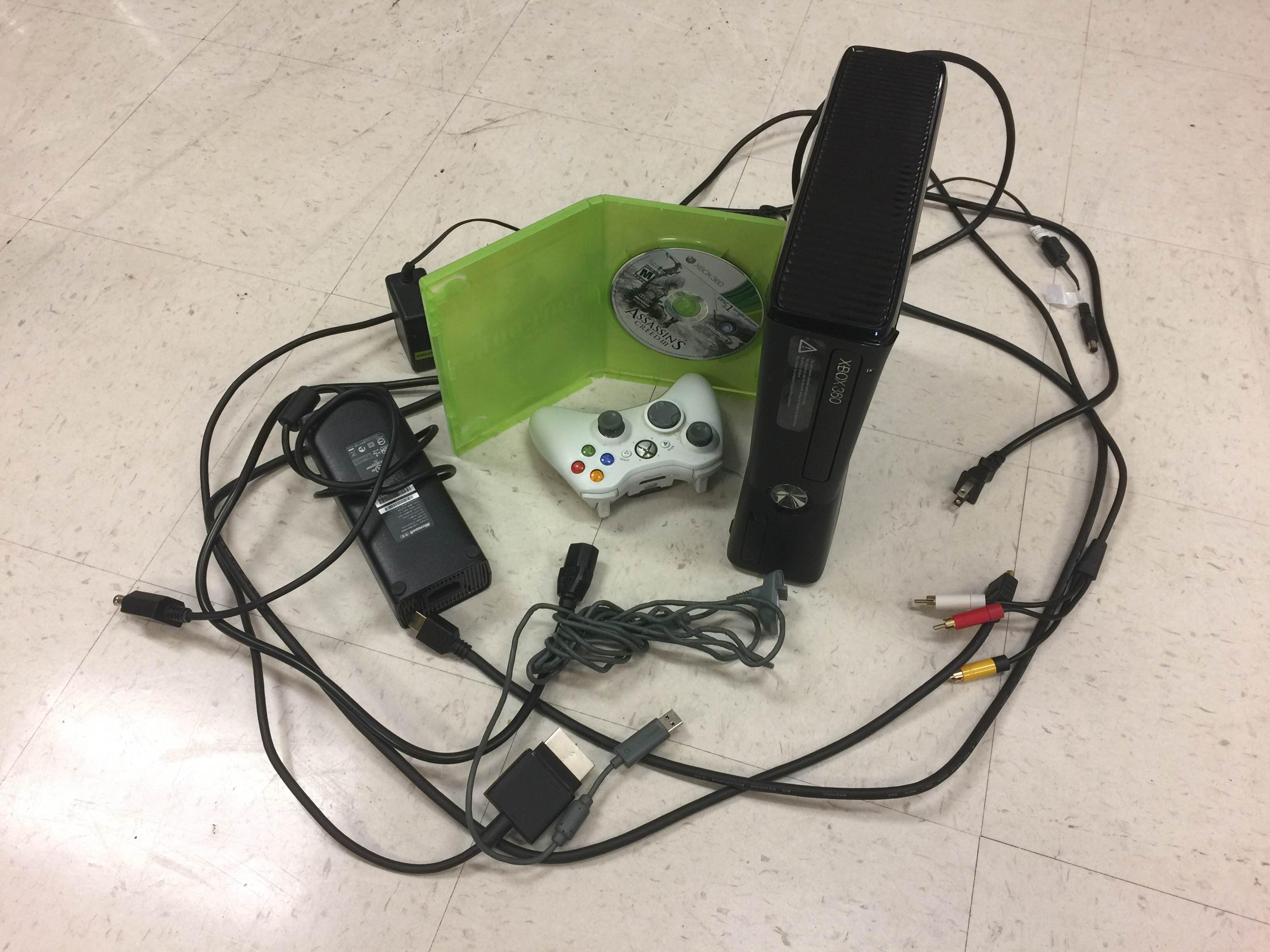 Photo: We traded all the way up from a paperclip to this Xbox

Photo: We traded all the way up from a paperclip to this Xbox Photo courtesy of Charles Lott.

Suffice it to say, bartering for goods and services is a lot more fun than spending hard-earned money. Not only were we able to trade our way from a red paperclip to an Xbox 360, we actually interacted with a lot of different people in the Blair community that we may not have met or talked to otherwise. Bartering and trading for items can bring communities closer together, and give you a story to tell for the rest of your life. We're going to sell the Xbox. Probably the first time a high school journalist has ever been paid for an article. And all we had to give up was a paperclip.