With each new school year, there are a plethora of new clubs for students to choose from. This year, a group of Blair students created the Hug a Tree club. With the goal of helping the local community with environmental issues, the club had a promising start, before losing traction and eventually shutting down.

The club initially made plans to work on projects in the local community helping the environment. Senior Ruby Willis spearheaded the creation of the club, hoping to facilitate frequent events to clean the local area. "I wanted to just create more cleanups, basically river cleanups, beach cleanups, that type of thing,"

Club sponsor James Demma decided to sponsor the club based on the club's goal to help outside of the Blair community despite not knowing Willis closely. "I don't know [Willis] very well, but I agreed to sponsor this club because I liked what she said the club was going to do, which was to do environmental projects outside of Blair, " Demma said.

Willis hoped her club would gain more interest based on its unique name. "People hear the name and they're like 'What's that?' and then you get to explain it's all about loving the environment. It's just a funny name," Willis explained.

There was enthusiasm for the club in its first few weeks, as club members planned a cleanup on Sligo Creek and looked forward to organizing other events. However, that excitement quickly faded. "The first couple meetings were packed with people, but then I think the momentum went down," Demma said. Most club members did not go to meetings after having trouble balancing the club with other responsibilities. "People stopped coming to the meetings because my whole club was basically seniors and it was kind of at a difficult part of the year for people to be consistent coming meetings," Willis explained. After students stopped going to meetings, Willis ultimately shut down the club, not wanting to run it alone.

There are still posters advertising the club around the school, giving an outdated club meeting time and a Remind code not in use. However, Willis intends to bring the club back this spring, aiming to keep it running for a longer period of time. She plans to recruit new members when the club starts again. "I think the Hug a Tree club could be really good and I just need to promote it more and get more people involved," Willis said. 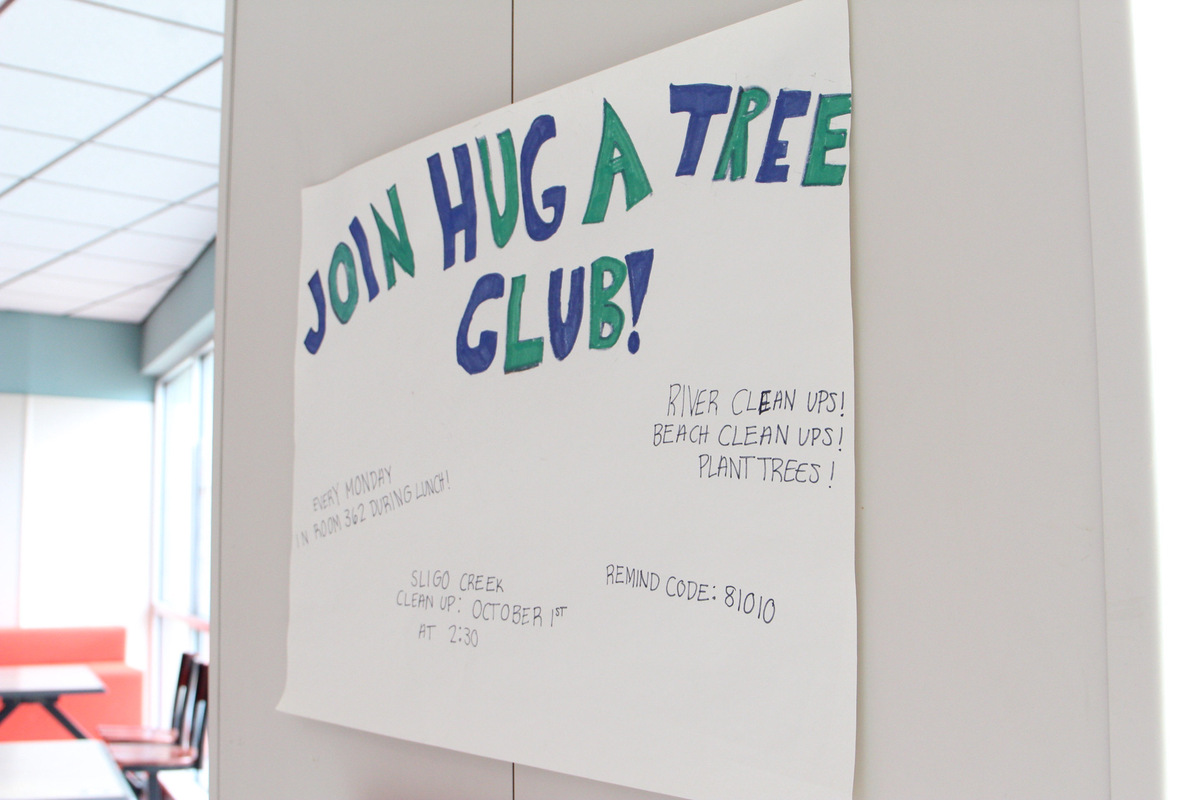 Photo: Hug a Tree club poster on the third-floor main hallway, months after the club shut down (Courtesy of Isabelle Megosh)

Willis is optimistic about the future of the Hug a Tree club and looks forward to accomplishing club members' goals. "Everybody in the club had really good ideas and it is just a matter of following through with them," Willis said. "I hope that we can have some successful cleanup projects as well as raise awareness about what individuals can do to reduce their carbon footprint and bring awareness to the global environmental crisis."