Humans of Blair: Finding the good in everything

"Embrace everything, because without sadness, there's no happiness."

Senior Liam Mendizabal-Betancourt saunters into biology, stopping to chat with some students in the room before taking his seat. It's just an ordinary day; there are no field trips, no surprises, nothing special is planned. But still, he is smiling, because Mendizabal-Betancourt is the kind of person who finds joy in everything he does. His energetic, friendly attitude is accentuated by his big smile and very voluminous hair. He has no idea where his energy comes from, but he has always had it. "I don't know [where it comes from]. I haven't actually thought that much about it," he says. It is evident in the way he walks, talks and addresses people that he has a distinguishable positive energy. But unlike his energy and confidence, his positive attitude wasn't always with him. Instead, it came from a good friend. 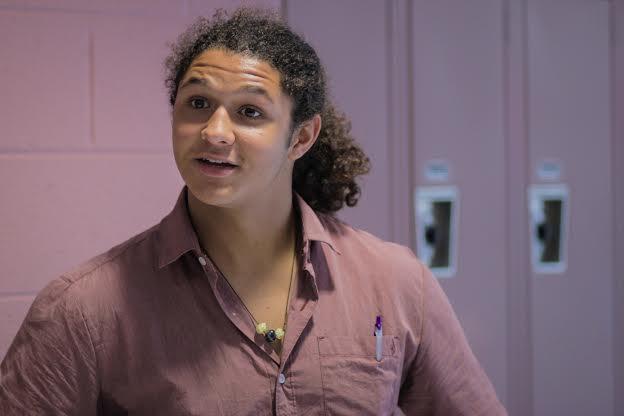 Photo: Liam Mendizabal-Betancourt seems to don a perpetual smile wherever he goes.

Photo: Liam Mendizabal-Betancourt seems to don a perpetual smile wherever he goes.

Mendizabal-Betancourt remembers the words of one of his close friends, a sixty-five year old patron of his father's restaurant: "Embrace everything, because without sadness, there's no happiness.” The two would frequently hang out at his father's restaurant and became friends. They would talk about books, theatre and the Latin language, a mutual passion. "She was just awesome," he says. "She was the happiest person I've ever known." He explains that she inspired him to find the good in everything he did. "Be happy; it wasn't something that she taught me, but it was something that I just learned from her," he says.

Being happy isn't always easy. When he was twelve, Mendizabal-Betancourt's same friend died from the effects of a life-long battle with a heroin addiction. He still feels her loss, but though it shattered his conceptions of life and mortality, he says it also inspired him to make the most out of life and embrace all the experiences, the good and the bad. "It made me realize that not everything is instantaneous gratification," he says. He has learned to take everything in stride, reveling in the good and learning from the bad.

At the end of Biology class, Mendizabal-Betancourt gathers his things and stands up to leave. It is impossible to miss the smile on his face as he walks out of the room.