As the sun rises above the D.C. Armory on Sept. 10, Billy Allen sits on the concrete steps reading his Bible. "God makes things happen for a reason," he sighs, closing the book and turning to look reflectively at the people beginning to gather at a Red Cross booth across the street.

Allen, a survivor of Hurricane Katrina and an evacuee staying at the D.C. Armory since Sept. 5, epitomizes Southern hospitality. He greets you with a smile and a laugh. "The name's Billy Allen," he says, "but people know me as the 'Hootin' Nanny!'" He swears he can clean any house no matter the state it is in and that he can make the best jambalaya around. "Back in New Orleans, I don't have to go look for people; people come look for me!" he exclaims, his blue eyes twinkling in the sunlight.

Allen's skin shows the wear of the sun and age, but when he talks, his voice exudes the enthusiasm of a much younger man. "I lived in New Orleans for 49 years. People tell me I don't look 50, but next year's the big five-zero," he laughs. Suddenly his tone drops and, showing his rare serious side, he says, "I may be living my life here now, but in 49 years, you get homesick, you know?" 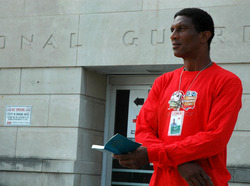 Photo: Billy Allen takes a break from reading his Bible for a moment to view his fellow survivors gathered around the D.C. armory on Sept. 10.

Photo: Billy Allen takes a break from reading his Bible for a moment to view his fellow survivors gathered around the D.C. armory on Sept. 10.

Allen isn't the only evacuee at the Armory who's homesick, and he isn't the only one who refuses to relent to the horrors of Hurricane Katrina and the devastation that brought him to the nation's capital.

Designed to hold crowds of up to 10,000 people, the D.C. Armory is usually used as Washington D.C.'s auditorium for conventions, banquets, circuses and various other shows. But for now, it is being used to house the nearly 300 evacuees who were airlifted from New Orleans and transported by bus on Sept. 5.

One of the first to arrive, Tommy Riley is grateful to the Red Cross. "I appreciate all that they've done," he says. "They've provided us with temporary homes."

Wayne Marcuso, another evacuee, is not only grateful to the Red Cross but also touched by the overall nationwide response. "It reaffirmed my faith in the human race," he says, clutching his cane tightly as he sits on the Armory steps, "It's nice to see people come together and help."

Marcuso's house in New Orleans didn't suffer much damage other than a broken gutter, but he was still surprised at the response to the hurricane. "I'm a little upset with the federal government," he says. "FEMA didn't show up until three days after the hurricane. But the Red Cross is phenomenal." 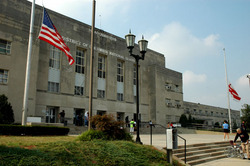 Photo: The D.C. Armory, designed to hold crowds of up to 10,000 persons, is currently home to around 168 New Orleans evacuees, according to the Red Cross. The Red Cross is also helping evacuees find jobs and housing in the surrounding area.

Photo: The D.C. Armory, designed to hold crowds of up to 10,000 persons, is currently home to around 168 New Orleans evacuees, according to the Red Cross. The Red Cross is also helping evacuees find jobs and housing in the surrounding area.

The Red Cross estimates that around 400 evacuees were originally in Washington, D.C., and that the current population of evacuees in D.C. is about 168. "It's difficult to say how many [people] we've relocated because they aren't required to check in and out," says Barber.

"We want to make sure people are finding jobs and that if people need aid, they get aid," says Cameron Valentine, the Public Relations Director of the local Red Cross chapter.

In the future, the Red Cross hopes to provide the evacuees with jobs and housing in the area. "We've got Housing and Developement and resume-writers here," says Barber.

Valentine stresses that the Red Cross is not working alone in helping the evacuees settle into the area. "The Red Cross right now is just working on making sure evacuees have food, clothes and water," Valentine says. "They will be working with Housing and Development and FEMA to find jobs and houses. We want to make sure these people have permanent places to live if they plan to stay in the area."

There is no certainty when it comes to the future of New Orleans, but no one seems ready to give up hope. "I was born there and I'm going to die there," Marcuso says with conviction. But it is estimated that around 140,000 to 160,000 houses have been submerged or ruined in New Orleans and that rebuilding New Orleans would carry the heavy price tag of $100 billion dollars.

All this, though, does not sway Allen. "If they get things straight, New Orleans'll be rebuilt," he predicts.

And for now? "All I want to do is see The Capitol!" he laughs, slapping his knee.