Doctor Strange takes the very familiar story line of foolish pride, followed by the inevitable action that brings his success to a sad end, that you don't have to know the Dr. Strange comics to be able to figure out. However, this film provides enough mind-bending effects, humor, and good acting to keep this movie fresh in a time of formulaic, "tried and true" superhero movies.

The film opens in New York, where Dr. Steven Strange (Benedict Cumberbatch) is living lavishly as a brilliant and successful neurosurgeon. After a devastating accident renders him incapable from returning to his old life, he has a journey into his own soul, and into the Far East. There, he meets fellow travelers and powerful leaders, eventually becoming a quite powerful sorcerer with incredible powers and relics. While the story line resembles previous marvel blockbusters, the elaborate, mind-bending visual effects and action breaks Doctor Strange free from the feel of a typical Marvel film.

The wow factor arrives right off the bat, with intense action to hook us in before we even get a glimpse of Dr. Strange. Dark wizards flee an ancient temple only to appear in contemporary Manhattan, where a hooded figure whose face we can't quite see nearly catches the evil sorcerers by altering gravity, transforming skyscrapers, and summoning bright swords and shields out of thin air.

After the opening battle that signals troubles to come, we meet Dr. Steven Strange, the cocky, proud, arrogant surgeon who both attracts and repulses fellow doctor Christine Palmer (Rachel McAdams). After a spectacular Lamborghini accident leaves Strange unable to do his job because of a hand injury, he is left broke and searching for answers. His quest to heal himself leads him to Kathmandu, in the Far East, where he encounters Mordo (Chiwetel Ejiofor) and his all powerful master, the Ancient One (Tilda Swinton). Ejiofor plays Mordo splendidly, and makes him a fascinating character to watch because his motives are just as complex as Strange's. Strange approaches the Ancient One's teachings with skepticism at first, as he is a man of science, which is a roadblock to his success in sorcery. But above a pretentious skeptic, Strange is a fierce competitor and quick learner. Strange is a know it all who is determined to once again become the smartest man in every room, the movie pokes fun at the sworn materialist as he tries to master a worldview he barely believes and of course, his stubborn rationalism doesn't last long as the Ancient One coaches him through a world of magic and mumbo jumbo that looks incredible on the big screen. With a disgraced former student of the Ancient One threatening to wreak havoc and destroy the world. Strange has to learn quickly if he wants to survive. 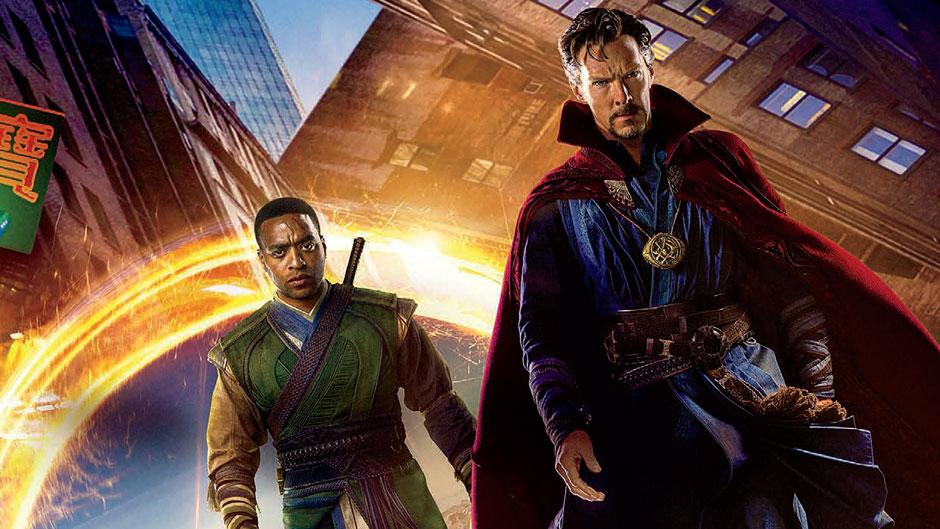 Fortunately, no more than a few minutes ever pass without a dazzling display of effects and wizardry. The movie builds on the eye-popping visual effects of the 2010 film "Inception" and the action scenes are kaleidoscopic. These scenes are great for the spectacle, but the most interesting battle for Doctor Strange is with himself. He must fight to regain the use of his hands and later to overcome everything he'd learned – about the laws of physics and the social conditioning that made this doctor believe that his self-worth was tied to a job he can no longer perform. Cumberbatch is both literally and figuratively fighting fighting for his life.

Director Scott Derrickson does a great job on this movie, from the fantastic supporting cast, to his portrayal of Strange that keeps audiences happy. Strange is a man with a mask of arrogance that's always in danger of slipping, which complicates his heroism with moments of comedy, bluffing, and doubt. The movie burst out of the gate with originality, freshness and mind-bending awesomeness not expected from a second tier character that most people haven't heard of. While the movies climax is another predictable threat to all of mankind, Doctor Strange offers us battles of another kind as well that keep this film fresh and incredibly trippy. You'll be left wishing there was more of him until you see the two post-credit scenes.