James and Sandler team is sure to provide laughs

In order to enjoy this comedy, you must either be an Adam Sandler fan or not take the film seriously seriously. With that being said, "I Now Pronounce You Chuck and Larry" is a side-splitting comedy with great chemistry between Sandler and Kevin James. 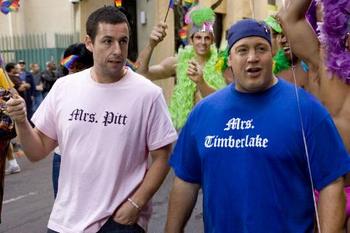 
Lean ladies man Chuck Levine (Sandler) and big, still-pining-over-his-late-wife Larry Valentine (James) hardly seem the type to be best buds. But they are; in the twenty-odd years they have been working side-by-side as heroic firefighters, they have developed a close bond. When Larry saves Chuck's life, Chuck is overcome with gratitude and tells Larry he would do anything to pay him back. Fearing for his children's future in case he dies in a fire, Larry devises a plan to circumvent the bureaucratic red tape preventing him from receiving life insurance benefits: having Chuck pose as his life partner.

As a 100 percent heterosexual, Chuck is, of course, reluctant. But his promise to his best friend enables him to march into court - albeit in heavy disguise - and sign the marriage license. However, all is not well for the unlikely couple. When a fraud-checking bureaucrat comes to check the veracity of Chuck and Larry's relationship, alarm ensues and they hire Alex, a no-nonsense but smokin' hot lawyer (Jessica Biel), with whom Chuck is instantly smitten. A huge supporter of gay rights, Alex warns them of more drop-ins and suggests taking a quick drive to a Canadian wedding chapel to make the marriage official. Coming back from their honeymoon, the couple meet a testy, intrusive investigator, Clinton Fitzer (Steve Buscemi), who is willing to do everything in his power to prove Chuck and Larry's union false.

Together, Chuck and Larry must overcome the odds (and the oddness of the situation) to get the best of the bureaucracy and secure a future for Larry's children.

There is no doubt that pretty much everything about this movie is far-fetched — the ridiculous plotline, the super sexy lawyer, Ving Rhames getting in touch with his feminine side, the list goes on. However, the film's unlikeliness adds to the humor, which, after all, is what the movie is aiming for.

Furthermore, like most Sandler movies, "Chuck and Larry" is bursting with stereotypes (many will be offended by the Japanese-Canadian wedding coordinator and further more outraged that Rob Schneider, a half-Asian himself, was willing to play the part) and, naturally, a lot of gay jokes.

The only truly irksome part of the movie was Buscemi's role as Fitzer. Hollywood has done this a thousand times — they believe an unfunny character, who thinks he is funny, is actually funny. It's not; it's irritating and diminishes the comedy. But his performance is made up by a great cast, including Dan Akroyd, Richard Chamberlain and a variety of Sandler's former SNL buddies...and you really don't want to miss David Spade in a skimpy bunny costume. But the most pleasing performance comes from Kevin James, a truly underrated comedian, as the loveable and silly Larry, who only ever wanted to keep his kids safe.

"Chuck and Larry" is the type of movie to see with a couple of friends on a Friday night, when there is nothing else to do. Come to the theater with light expectations, ready to laugh uproariously when the mailman hits on Larry ("special delivery, first class") or when Chuck is consistently thought to be the "girl" in the relationship. And despite its flaws, "Chuck and Larry" attempts to be more than just a mindless comedy. It teaches the timeless lessons of tolerance, friendship and love.

I Now Pronounce you Chuck and Larry is Rated PG-13 for crude sexual content throughout, nudity, language and drug references and is now playing in all theaters.