One reporter's week long quest to become the speediest

Looking back on four years at Blair, there's a lot that this intrepid reporter has accomplished. Reviewing perhaps some of the worst movies to ever grace the silver screen (why is Samuel L. Jackson SO angry in every single movie?), eating more cupcakes than humanly possible and bravely trekking through some of the scariest Halloween trails Maryland has to offer; there isn't much that this reporter has left to do before she graduates… except…

Become Blair's version of Olympic Gold Medalist Usain Bolt
It's true, underneath this short and nerdy exterior lies the heart of a champion. The day I watched Usain Bolt practically coast across the finish line during the 2008 Olympics, my mind was made up: I was going to become a runner. And not just any runner, an amazing runner. 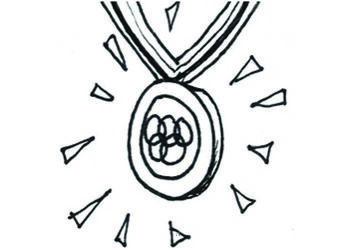 Photo: It may take a while for this reporter to catch up with Usain Bolt, who won three medals at the 2008 Summer Olympics.

Photo: It may take a while for this reporter to catch up with Usain Bolt, who won three medals at the 2008 Summer Olympics.  Photo courtesy of Casey Goldvale.

As in every MTV Made episode, every dreamer is trained under the wise direction of an expert. Unfortunately, all the fan mail I sent to Mr. Bolt went unanswered. So this reporter will have to go it alone, relying solely on running tips found on the internet and the advice of the joggers in her neighborhood. With only a week to achieve this goal, this reporter needs to get her training on track (pun intended). Let the games begin!

Day One: Study the style
Everybody knows that the best way to learn how to do something is to observe the best. Therefore, my first day of training consisted of watching Usain Bolt videos on Youtube. After about 2 hours of watching Bolt's racing videos, I'm pretty sure I've got the technique all figured out. Running is just like walking really really fast; it's all the same basic principle: one foot in front of the other, over and over again. It's amazing the things you can learn and accomplish by sitting mindlessly in front of a computer screen.

Day Two: All about the swagger
If there's one thing I've learned from watching the Bolt Olympic videos, it's that it's all about the swagger. Bolt was a relentless gloater, often celebrating his win before even crossing the finish line. Clearly, that was the attitude a new runner should adopt. I've already begun gloating, telling both friends and family that one day in the near future, I would probably (maybe) let them touch my gold medals. Furthermore, have you ever noticed just how stylish Bolt's running outfit is? Obviously in this situation, the clothes made the man. I spent the whole day scavenging for the perfect track jacket and sneakers. I found a quality fanny pack to carry all my running supplies. Unfortunately, I was unable to find my neon yellow lycra onesie.

Day Three: Too hot to handle
Today I planned to take my first actual run around the track. But it was 85 degrees outside! Honestly?! I made it halfway down the block before I seriously contemplated hitching a ride with the mailman. I figured my dreams could wait one more day, and then proceeded to sit indoors, cooling down in front of the air conditioning vent.

Day Four: Battle wounds
As the temperature dropped, so did the jaws of my neighbors as they watched me stumble over a curb and scratch up my knees. On my first day exercising my new running skills, I managed to injure myself repeatedly. Instead of breaking down into tears, like many of the people on MTV's Made, I picked myself up and continued to hobble through the remaining distance. Usain Bolt, I believe you are about to meet a very worthy adversary. 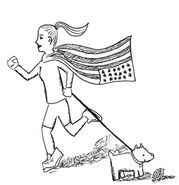 Day Five: Pester the pros
By the fifth day, it was clear to me that I wouldn't be able to reach my goals alone. Feeling a bit defeated, I watched the Blair Track team zoom around the track. How come they weren't falling every few seconds? Why didn't they look like they were about to cry at the end of their laps? I asked Indoor Track team member senior Sekou Sangare for some tips. His pointers actually made a lot of sense.
1. Stop wearing so much gear. (Apparently, running while draped in the giant flag of my home country was a no-no.)
2. Pace yourself
3. Take baby steps (This one made no sense. How is running like a baby supposed to help me win a gold medal?)

Day Six: A little motivation
The runners I talked to told me to find something that would motivate me to run faster. Some suggested music, others suggested envisioning something I really wanted waiting for me at the finish line. Without an iPod, and unwillingly to cart my boom box around with me, running with music was not an option. However, I was totally able to envision my gold medals waiting for me at the finish line. This method definitely helped me to run faster and make it to my end destination faster, but I wish the runners had given me tips on dealing with the crippling disappointment of not actually attaining any gold medals at the end of my run.

Day Seven: It's all going to the dogs
In my neighborhood, there are weekly doggy jogging days in which joggers can go running together with their dogs down a trail. This was my final chance for me to show everyone just how much better I am than them (and their dogs). With my dog, Sushi, in tow, I embarked on this little jog through Wheaton Park. Unfortunately, I didn't take into account how difficult it would be to run a good race when your Shih-Tzu is constantly stopping to smell every pinecone, tree and grass patch. We didn't come in first and I certainly didn't win any medals. But many people did compliment me on how speedy my dog was, considering how small he is.

Well you really can't win them all, some of us aren't meant to be champion runners, but: Usain Bolt, I bet your dog can't beat my dog in a race.