The Editors-in-Chief decided they needed a break from the emotional strain of dealing with the tough (or should we say inane) questions and requested assistance. The great Danny Scheer, from SCO, and the bitter Armin Rosen, from Print, responded to the call and wrote what is undoubtedly one of the 15 best Ask Chips EVER. LOL.

Will asks, "When will the next Ask Chips come out?" 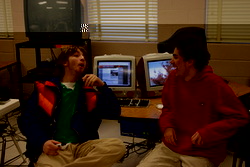 Why asks, "why does your paper suck?"

But if you're referring to the quality of Silver Chips Online, then I recommend you get an education and start your own newspaper.

Santa claus asks, "how can i maximize my production output??"

Armin replies: Simple economics, Santa. In order to operate efficiently, a firm must make enough money on each additional sale to equal the cost of creating the next additional unit. Marginal cost must equal marginal benefit for a business to operate at peak production, and I'm surprised you've stayed open this long without grasping this very basic economic principle.

Naughty Sorceress asks, "Do the Canadians have a mind control machine?"

Danny replies: Yes, silly! The Super-Secret Canadian Mind-Control Device is located just to the right of the Institute for Canadian Studies and down the street from Camp Logging Camp. If you haven't heard of the Kingdom of Loathing, then you're probably lost right now. It's a text- and picture-based MMORPG with crude drawings and meat for currency. If you think you're ready to up the levels of the Mind-Control Device, please remember to bring your asparagus knife and your crafty mariahci pants before you venture in!

freeloader asks, "When is it too late to have a happy childhood?"

Armin replies: Try when your childhood's over, freeloader. Because, dear readers, I frankly don't care what Mr. Mogge or those bumper stickers say--It is always too late to have a happy childhood. But it's never too early to move on...

me love donkey asks, "since this is my first time in a while that i've been single for new year's eve, what should i do?"

Armin replies: Well donkey, you can quit complaining for starters. Then you can wipe away your tears, grab some champagne and some party poppers, and enjoy new-year's eve girlfriend-free. I'm sure it won't kill you. And if it does, then you're probably too weak to be of any use to the human race anyway. NEXT!

Nippy asks, "if a snowman and a fat man fight, who would win?" 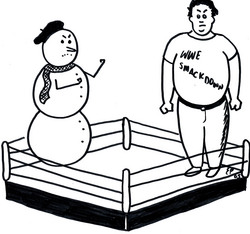 Photo:
Danny replies: Senior Nippon Saisaard asked a very silly question. Of course the snowman would win! I can understand any confusion one might have about the snowman's victory, but not many people know the true nature of the snowman. Snowmen are nasty, unpleasant beasts that live in sub-zero climates in the most isolated parts of Sibera. Their stomach acids can corrode an elephant in less than THREE hours. Not to mention their mastery of nunchaku skills from the Frozen Nunchaku School of Upper Sibera. The fat man, on the other hand, is relatively not in shape. So who'd win? The snowman. Doi!!!

Andrea asks, "If a turtle doesn't have a shell is it homeless or naked?"

Armin replies: If it doesn't have a shell, it's neither homeless nor naked. That sucka dead.

Armin replies: Well there's an easy way and there's a hard way. The hard way is to ask around, keep your eyes peeled, or, harder still, to ask her out anyway and prepare yourself for a harsh dose of reality. The easy way is to get on facebook and check her relationship status. One of the few, and I mean very, very few things facebook is good for is finding out these potentially sensitive pieces of information (like relationship status and sexual preference) totally pain-free. So if it's there, use it.

Pseudonym #2 asks, "Why does tennis appeal to so few people in the Blair community? It is a relatively cheap sport -- all you need is a racquet and a can of balls, and access to public courts -- and tennis is one of a few sports that exercises almost every muscle in your body. I have heard it said that tennis is an intellectual's sport -- that appreciation of the strategy and mental gymnastics present in a high quality game requires a correspondingly high aptitude -- but in my determined optimism, I have convinced myself that the necessity of a brain does not limit its audience among the human race. Specifically, why don't the tennis teams at Blair, both of which are in Division I, receive the adulation that they deserve?"

Armin replies: Get a grip, Sue. Tennis is a cult sport. It's not like football and basketball or the other sports that Blazers have watched and played their entire lives. Unless you've been raised on aces and match-points, and unless you can comprehend such trifling semantic points as, for instance, the difference between a forced error and an unforced error (full disclosure: I can't), a tennis match is far from meaningful and exciting. For the uninitiated, Blair tennis offers a couple of good rallies, some odd-sounding grunts, no scoreboard and, hello, no decent vantage point from which to watch the alleged action unfold.

Which brings me to my last question: how can you expect people to express adulation for a team they can't even watch? And to my last point: Any sport that's played primarily in private clubs is not going to hold sway in a school with our demographics. Tennis, like expensive sports cars or wine sampling, is the domain of a wealthy and privileged few. Granted, it's not as elitist as golf, nor as expensive to play as football—but, for whatever reason, it's something that the economic and intellectual elite seem to disproportionately enjoy. And most of us don't fit either description.