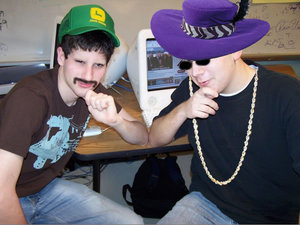 Photo: Your Ask Chips hosts for this edition in their not-at-all Photoshopped picture.

Photo: Your Ask Chips hosts for this edition in their not-at-all Photoshopped picture. Photo courtesy of Diana Frey.

With quail hunting's recent dramatic drop in popularity, the Chips Technical Staff has lost its favorite hobby. But we're not going to let that stop us from taking wild shots at your questions. For this Ask Chips we bring together Senior Technical Staff Eric Hysen and recent tech initiate Dan Green, as they work with various Blair faculty members and other Chips staffers to tackle though questions.

Curious asks, "So... ask chips hasn't been updated in about seven months and never was very funny, yet it remains placed in one of the most prominent positions on the front page. I mean, I guess if you lack content and anything worth reading, that's an OK thing to do, but... silver chips online should really be able to figure out something better to put there (and please don't let it be NEW ask chips. The world has suffered enough from the ego-istic, self-serving trips of ask chips)."
Dan: We must admit that after careful self-scrutiny we have found Curious' allegations to be 100 percent true. In light of this realization, Silver Chips Online is pleased to announce its unprecedented new initiative to stop this self-serving elitism.

Eric: We've also decided to recommend that Merriam-Webster add "ego-istic" to their dictionary, in your honor.

Dan: Hey, did you know we were in the New York Times last week? What now?

Dashes asks, "Is the resurrection happening or what?!"
Eric: We weren't really sure what exact resurrection Dashes was referring to, so we decided to open this one up to our expert panel:

Dan: We eventually realized Dashes was referring to the resurrection of Ask Chips. As much as we'd love to answer this question with a definitive yes, our editors won't let us. They don't even know this is being published.

Fire drill asks, "What happens when the fire alarm rings during a code red?"
Dan and Eric: If you've been to Blair at all this school year it's likely you've caught on fire in a bathroom. This is just one of the thousands of fire-related questions we've been sent by concerned students. Luckily, Silver Chips headquarters hasn't had a major fire since early 2002, so we can answer your questions with the highest possible regard for safety available on the Internet.

Safety Coordinator and coffee addict Mark Curran: During a code red teachers and staff are dictated that you can't go outside the door no matter what. If there were a fire, the police in charge of the building would have the master key and would go and personally escort each class out of the building.

Goose asks, "Why do we say alarms go 'off' when the system is activated?"
English Teacher and grammarian Phyllis Fleischaker: That's just one of those ridiculous little idiomatic things, it's not really a grammatical rule.

Pyro asks, "Why is fire red and orange?"
Dan: Like water, fire has no innate color. The hues of red, orange, and yellow you see come from reflections and framing effects due to the wavelength of the ambient light.

Eric: That's right Dan. The photosynthocycloids of the flame beams that power each flame are refracted by the naturally occurring 88.6 kilofrankel hypopyron quarks, according to Olatelukov's Quantum Chromatic Effect Equation

Random student asks, "Is there really a rule that says, if a third of a class or more is absent, then the teacher is not allowed to teach?"
Student Member on the Board of Education Sebastian Johnson: I don't know.

Dan: Now that we've exhausted the endless fount of knowledge on useless board policy that is our SMOB, we turned to random teachers, hoping someone might know.

Science teacher Leslie Van: I wish, but in New York if a third of the school is absent they close school.

Eric: Turns out the answer is no. 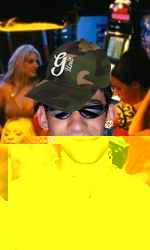 Photo:
50 cent asks, "Who's the most gangsta editor in chief?"
Johnson: Samir Paul.

Eric: Sebastian is wrong once again. Jeremy Goodman is clearly the most gangsta Editor-in-Chief. Why? Let's just say he has arrest warrants out for him in seven states.

Dan: Damn it feels good to be a gangsta.

Chips Print Managing Sports Editor and thugologist Mike Bushnell: If you added up all the child support he owes, you could buy Montgomery County.

Eric: And on that note, Ask Chips #16 comes to a close. I think we've all learned a valuable lesson from this: No more guests on Ask Chips. Ever.

Eric Hysen. Former SGA President Eric Hysen was a senior (really?) in the Magnet Program and is excited to begin his third year as a part of SCO's amazing team. While he would have loved to be able to be a full member of the SCO Senior … More »

Daniel Green. Daniel is elated to be a member of Silver Chips Online for his final semester of high school. Armed with over three hundred years of web design experience he is estatic to help the site in any way he can. When not completely immersed in … More »