This is no blockbuster depicting great Disney leaders like the mighty Mufasa or crafty and charismatic Mulan. Instead, "Ice Princess" relates the touching story of teenage physics-genius-turned-ice-skating-champion Casey Carlyle (Michelle Trachtenberg), showcasing a positive progression in most of the movie's main characters. 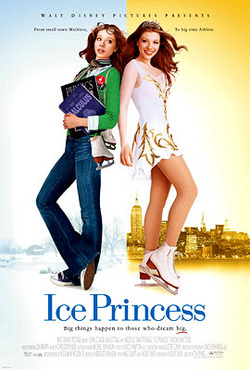 Photo:
It all begins when Casey's self-described genius physics teacher Mr. Bast (Steve Ross) mentions a special scholarship — a committee is willing to provide college money to a student who completes a physics project demonstrating enormous personal involvement and interest. And so, while idly viewing professional ice skaters on the television, our heroine begins to wonder, "I bet there's an exact aerodynamic formula…"

The baggy-eyed Casey bikes over to the Harwood Ice Skating Rink, armed with a video camera and a mind to delve into the physics of ice skating. There, she finds not only skilled teenage skaters, including Nikki (Kirsten Olson) and Gen Harwood (Hayden Panettiere), doing amazing moves in preparation for the regional meet, but also a mob of angry parents threatening to turn her in to the police for "scooping [their kids'] triple loop." With the help of her ID, notebook, and letters of references, Casey is able to convince the parents that she's just a student doing a research project, and she begins developing equations for her project.

However, Casey discovers much more than physics equations by the side of the ice rink. As she starts beginner lessons with Tina Harwood (Kim Cattrall), a retired Olympic ice skater, Casey finds Teddy Harwood (Trevor Blumas) and the two gradually become closer. Teddy is an immediately likeable mechanic, whose sarcastic humor could make even the most sober audience chuckle. When describing his Zamboni, he exclaims, "Put this baby on the road and I can book her up to two miles per hour. She can blow the doors off any street sweeper on the road."

Trachtenberg does a wonderful job acting as an overworked high school girl who balances both her schoolwork and skating by working late nights on her project and skating extra time behind her mother's back. After a successful recital, she realizes that she could truly be great at ice skating, and tries out for the regional skating competition, where she is to be pitted against tough competition.

Following an exciting short program in which Casey finishes fifth and Gen Harwood fourth, Tina Harwood shows her true colors by offering to buy Casey a new pair of skates, since hers are worn. Unfortunately, new skates cannot be used in competition for at least a week until they are worn in, causing Casey to fall and be eliminated from the next round of competition, opening a spot for the coach's daughter. The snide Harwood remarks it was better for Casey this way and that competition is ruthless by nature.

After her failure at regionals, Casey's life is in shambles. Her secret ice skating practices have estranged her from her mother, and her grades in school are slipping. However, the young skater eventually realizes that these are simply the signs of her change from student to athlete. As the movie comes to a satisfactory close, other characters, including both Casey's mother and coach, undergo similar changes to improve all of their life outlooks by the end of the movie.

Perhaps the easiest part of this film to criticize is the underlying idea that it is acceptable to give up education for the sake of a professional sport. However, Casey's idea of sports being more important than school simply falls under the ideology of following one's own dreams — the teenager dreams of being an ice skater, following this dream as far as she can.

John Silberholz. The Chips PRODMAN (and editoral board member), John enjoys basketball, tennis and biking, looks forward to yet another year on Chips. Among other things, he enjoys climbing trees (even though he has a weird tendancy of falling off of them), biking like crazy, playing basketball, … More »