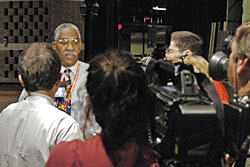 Several reporters arrived at Blair or contacted the main office by telephone throughout the afternoon. Reporters from ABC, NBC and CBS arrived towards the end of sixth period, seeking to interview Gainous and Hysen. After arranging a 2:30 p.m. press conference, they asked for the opinions of students passing by on camera. Gainous and Hysen then received the reporters in the auditorium and addressed their questions before they left at about 3 p.m. Reporters from the Associated Press and Channel One then arrived at approximately 3:30 p.m. and interviewed Gainous and Hysen outside the main entrance.

The Washington Post also published an article, "School Colors," in today's Metro section. The article, by Post education reporter Daniel de Vise, compiled a number of complaints of various students against the IDs, including quotes from Silver Chips Online comments and pages, and focused on the potentially divisive implications of the color coding system.

Washington Post Radio (1500 AM and 107.7 FM) also held a live forum by telephone at 4:35 p.m., in which host Bob Kur, Hysen, PTSA co-president David Ottalini and de Vise discussed the policy and its consequences.

The ID policy has aroused a great deal of controversy among students. Silver Chips Online has received approximately 200 comments concerning its first article about the new ID policy, and there have been over 500 votes in its online poll. 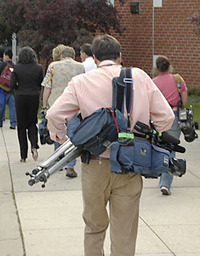 Under the new policy, students receive IDs color-coded according to their academy or, in the case of seniors, their class color. Students in the Magnet and CAP programs also receive different colors, as they are considered their own academies. Originally, yellow IDs were issued to ESOL students not assigned to academies. In late September, the policy was revised to give these students red IDs after the SGA expressed concern that the IDs would mark ESOL students for ostracism. Red was chosen because it officially designates all staff members and non-senior students not assigned to academies. For the same reason, freshmen, who are new to Blair and have yet to select an academy, are given red cards.

Hysen expressed his discontent with the local news reporters' coverage of the ID policy, attributing their presence to hype. He said, "I think this entire issue has been blown completely out of proportion. Sure, students don't like the color-coded IDs, but that's not the same as being 'outraged' or 'in an uproar' as some of the articles have said."

Hysen stresses that the Blazers and those concerned with the ID coloring system should take a step back to comprehend the scope of the issue. "I want the outside community to understand that there's no overt segregation or discrimination being caused by this," he said, "and I hope the Blair community won't get caught up in the media hype and keep this entire situation in perspective." 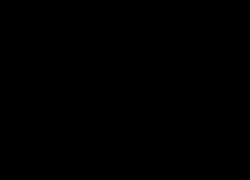 Photo: As students exited school Wednesday afternoon, they were met by several TV news crews waiting just off campus. Many Blair students were asked questions about how the new ID policy affects them and whether or not they feel the school has become more divided because of the colored IDs.

Photo: As students exited school Wednesday afternoon, they were met by several TV news crews waiting just off campus. Many Blair students were asked questions about how the new ID policy affects them and whether or not they feel the school has become more divided because of the colored IDs.

A Post editorial, which is to print in tomorrow's edition, also addresses the color coding system. The editorial board wrote that the "school officials acted with good intentions, although it is worrisome that people who deal with teenagers on a daily basis had no clue as to how this policy would be received." Hysen voiced concern, saying, "[The editorial] only further separates the media frenzy over the colored IDs from reality. Rather than putting this situation in perspective, it blindly assumes than active discrimination is already occurring as a result of the IDs."

He maintains that much of the previous concerns over possible segregation stemming from the ID color-coding have been addressed. "Aside from a few incidents with ESOL, which we've taken steps to correct, and with freshmen, which were more than likely not connected to the IDs at all, the discrimination and segregation that the editorial mentions has simply not materialized." Hysen also said that the freshmen hazing, which was an issue brought up in the Tuesday Post article, has in fact decreased since last year.

The ID policy was revised Tuesday afternoon and presented to the PTSA that evening. The new revisions to the policy included increasing the number of temporary IDs students may recieve per quarter before the administration takes disciplinary action. The Saturday detentions, parental consultation and possible suspension for insubordination remain.