IMAX's "Roving Mars": Not exactly out of this world

"Roving Mars," the new IMAX documentary playing at the National Air and Space Museum is, as the opening credits announce, "presented as a public service by Lockheed Martin, in collaboration with NASA." But wait — aren't public services usually free? So why, then, does a ticket for this 40-minute documentary cost a whopping $8.50?

The film, directed by George Butler and produced by the Walt Disney Company, is essentially one long, overpriced ad for NASA. It centers around the construction and launch of two interplanetary rovers, called 'Spirit' and 'Opportunity,' that will, if the mission is successful, land on the surface of Mars to study the planet for evidence of life. The film's first half follows Cornell geologist Steve Squyres as he and his team struggle to design, build and test a system that will protect the robots on their dangerous 40-million mile journey through the solar system. 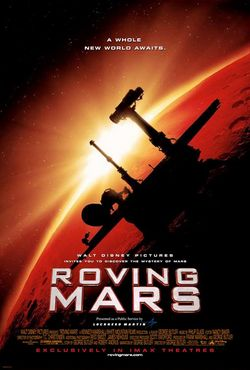 Photo:
Since the filmmakers couldn't exactly send a camera operator to Mars to film the launch operation (clearly, that would only increase the admission price), the second half of the documentary is based primarily around the computer-generated images of the Martian landscape sent back to Earth by the rovers' built-in cameras. The seamless CGI and the incredible realism of the IMAX screen are a hypnotic combination; the footage of the rovers zooming over the dusty canyons and wide craters of the red landscape looks almost more real than anything shot on Earth.

Perhaps the most arresting scene of the scant documentary is the rover's simulated landing sequence. The capsule's fiery descent into the Martian atmosphere at Mach-2, coupled with the gut-wrenching Dolby Digital sound effects, is at once suspenseful and thrilling. When the rover hit the surface, the airbags that deployed to protect the delicate machinery — which look something like a huge, intergalactic cocoon of bubble wrap — drew more than a few giggles from the audience. Unfortunately, the scene's visual impact is diminished by frequent transitions between the rover landing and footage of the control room back on Earth — mostly lengthy shots of the NASA scientists looking tense. It's meant to add suspense, but the effect seems forced and unnecessary.

It would be one thing to fork over the price of a ticket for more of these stunning visuals, but unfortunately, such revelations are few and far between. Instead, most of "Roving Mars" is comprised of interviews with the enthusiastic crew of scientists who engineered the project. Though the intrepid minds of NASA seem to be fascinated by the endless implications of the rovers' discoveries, the rest of us may not be so enthralled. The researchers' forays into geologic theory and the complexities of the robots' circuitry are enough to send even the most hard-core space buffs into a snooze.

The film is meant as an inspirational testament to the power of human achievement and, of course, to the greatness of the space exploration program; it seems that NASA wants to justify the projects our tax dollars are paying for. But this is essentially a tribute to a couple of robots, with some hydraulics and geology thrown in — how inspirational can it be? And in the end, the film offers no new revelations; we're no closer than before to discovering whether we are alone in the universe. "Roving Mars" is less a movie than an expensive, drawn-out commercial for NASA, albeit a commercial presented in full surround sound on the awe-inspiring IMAX screen.

Allie O'Hora. Allie O'Hora is a CAP senior. If you make fun of her last name, she will kill you and make it look like an accident. More »