In a sauna, finding nirvana

The hot side of yoga

Lady Gaga walks into the inferno of a Bikram yoga studio on Capitol Hill Sept. 8, a day after her concert at the Verizon Center. Compared to the Bikram fashion of sports bras and running shorts, her blazer and plastic bob may have been a bit flashy for the occasion. The other eight students took little notice, however - they were too busy practicing the grueling positions, sweat pouring down their faces. Bikram is to yoga as Lady Gaga is to the music business: it's more intense, way hotter and recently, really catching on. 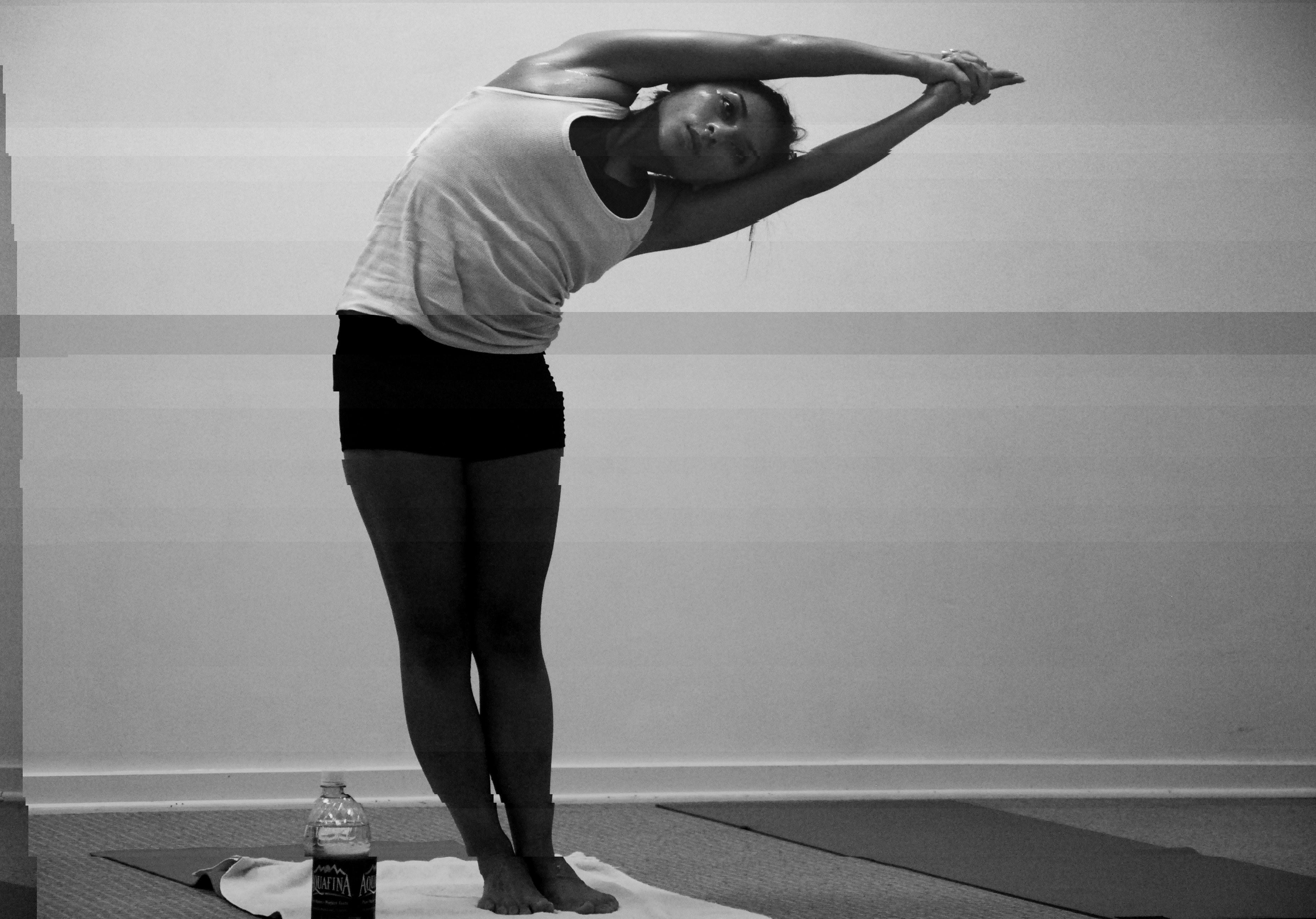 Photo: A Bikram student starts to sweat and stretches beyond normal flexibility in the heat.

Photo: A Bikram student starts to sweat and stretches beyond normal flexibility in the heat.

In 1973, Bikram Choudhury developed a precise series of yoga postures and started "Bikram's Yoga College of India." He later patented the system, along with the teaching style and high temperature of the studio. His company owns the many franchises around the world that use the exact same class. Some yoga practitioners will only take classes at studios with this patent, preventing other heated yoga studios not certified by Bikram's Yoga College of India from using the title "Bikram yoga". The distinctive element of this unconventional style is the sweltering heat of the studio. Students complete the same pattern of 26 strenuous postures, twice, in a 105 degree room for 90 minutes.

With dozens of studios springing up across the country, including one right down the street, it's hard for me to miss the craze. In a (heat) stroke of daring curiosity, I signed up for a class one fateful Sept. 14. Everyone I know who has done Bikram yoga either loves it or hates it, but I was wary. For me and others who haven't tried the red-hot craze, it sounds awful.
The goal of Bikram yoga, also known as "hot" yoga, is to achieve "one perfect state of mind," as advertised on a sign hung in the window of the Takoma Park studio on Carroll Avenue, about four miles from Blair. All classes are available to people of any experience level and age, making it accessible to Blazers. During my experience, I saw some benefits to Bikram yoga. Other Blazers agree - they say Bikram yoga not only improves their physical health, but their emotional health as well.

The postures of Bikram yoga require extreme flexibility and physical strength, exaggerated by the temperature of the room. Junior Greg Kehne, who has been attending classes since this summer, says that after overcoming the initial discomfort and exhaustion the class entails, he began to see the postures also as a strength-building exercise. "Bikram definitely puts your cardio-respiratory system to a work out. It also works on flexibility, core strength and really engages your muscles," he says.

Heat, and by extension, sweat, is central to the process of Bikram yoga and may be its most distinctive trait. A drenched towel is a good towel, I quickly learn. "It's like a flushing experience - you sweat like a pig," says Kehne.

Sweating is the body's natural cooling process, but sweat also carries out toxins in tidal waves onto the beach towel laid on top of the yoga mat. Majo Gibboney, Blair English teacher and Bikram yoga enthusiast, describes toxins as harmful chemicals produced by the body under certain conditions. She believes that Bikram yoga has specific benefits for teenagers. "[The heat] makes your muscles more flexible and makes them release more toxins, physical and emotional," she says. "Teens are full of toxins because of their eating habits, high emotions and hormonal changes."

This release of these toxins through physical activity helps eliminate the root of emotional, internal stressors, according to Stephen Pleasant, owner of and instructor at the Takoma Park Bikram yoga studio. "Stress starts in the physical body, and you need to physically release it. You can feel it running out of you. When your body feels better, you emotionally feel better," says Pleasant.

When people are always on alert for upcoming and current problems, their bodies constantly release "stress hormones" such as adrenaline and cortisol, says a 2010 study from the Mayo Clinic, a national research institution. Extended presence of these chemicals in the body, however, can cause damage to the immune system and other natural bodily functions.

Whether all toxins are purged from the body, Bikram yoga students often feel stress relief for other reasons. Another Mayo Clinic study released in 2010 indicates that challenging physical activity boosts endorphins, the "feel-good" chemicals in your body, as well as shifts focus away from constant stressors and worries. "If you go in and you're really stressed, you get a chance to sweat all that out and let go of all that nonsense," says senior Emma Kaufman, who has been practicing Bikram yoga for three years.

Pleasant believes that Blazers can benefit emotionally in other ways besides balancing body chemistry. Through Bikram yoga, Blazers can become a part of a community of all ages, as well as become engaged in a constructive activity. 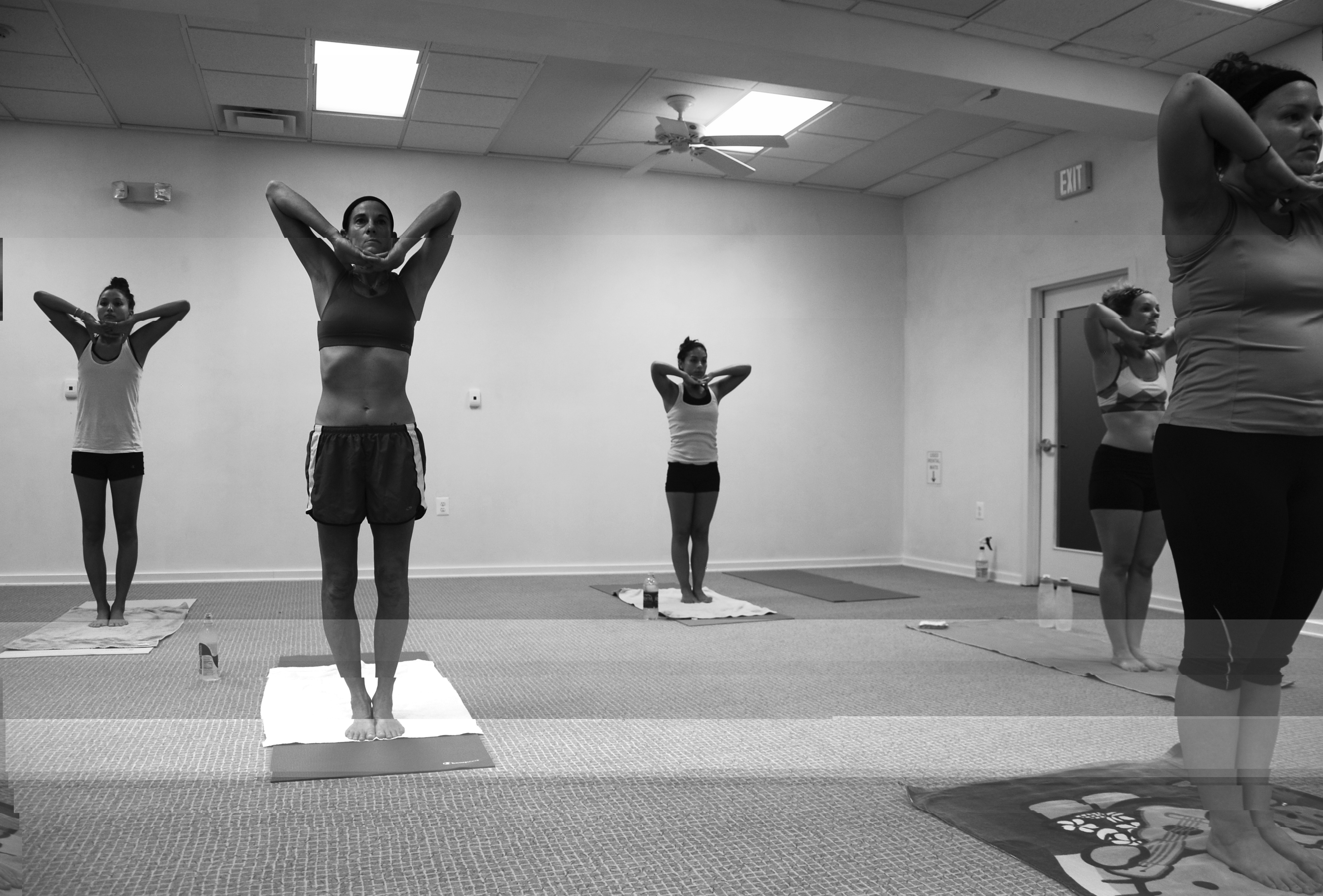 Photo: Bikram students begin class with Pranayama, or deep breathing, before heat completely sets in, to acclimate their bodies to extreme temperatures.

Photo: Bikram students begin class with Pranayama, or deep breathing, before heat completely sets in, to acclimate their bodies to extreme temperatures.

I found that intense focus on physical challenges and discomfort during class actually does more for my mind than my body. When pouring every ounce of attention to pushing my knee straight while keeping my fingers interlocked and balancing on one foot, there is little concentration to spare for anxiety about the test tomorrow, the latest nasty gossip or the project due in a week.

Senior Tasmin Swanson, who I had the great honor of accompanying to my first class, has since attended another class, but remembers her first impression well. "It put me very much in the present," she says. "If I thought too much about time, I'd lose focus on the pose. By not thinking about anything else, I got the most out of each pose I could."

I found that first classes are neither graceful nor pleasant, but force students into a particular way of thinking with which they are unfamiliar. The largest challenges for teenagers doing Bikram are mental, according to Pleasant. I'm not sure my mindset of stubborn competition at first was entirely helpful.

Seeing the fifty-something-year-old woman in front touch her head to her extended knee while I hopped around in circles like something out of Looney Tunes did little to encourage a positive attitude. I hit the wall, eventually, as do many on their first time, something I did not expect to happen. When asked how I was doing by the authoritatively friendly instructor, I replied, in my desperation, "This is suicide! What time is it?"

Turns out the studio decided to take down the clock, in an effort to eliminate things that prevent people from having a present mindset.

Chodhury's patented series of postures hasn't changed since 1973, nor will it. Chodhury chose to maintain the same postures for every class, as opposed to other forms of yoga, in which the teacher decides the postures for the class. A repetitious system allows complete focus on doing the postures to the fullest extent of the student's ability, rather than concentrating on getting to the next one. Bikram yoga changes with the student, rather than with the teacher. "With Bikram yoga, it's the same thing every time, but you're different every class, so it makes the experience unique," says Kaufman. "You get a peace of mind out of any yoga class. It quiets the mind, and lets you be in the moment for a class. The room has a big mirror in the front, so you can see your postures getting better."

I found that being "in the moment" is worth the suffering, heat and exhaustion during the class. In a later class, I realized that through the 90 minutes I spent physically suffering, on the inside, I was truly happy to be free of the stress of life at home and school. But it is almost impossible to come across such external suffering outside Bikram. If Bikram yoga managed to distract me for just five minutes from dwelling on the past and feeling anxiety toward the future, I think it succeeded.

A breath of fresh air

For me, the most memorable part of Bikram yoga is leaving the studio, feeling the full extent of the accomplishment just achieved. Even the otherwise torturous heat of a 90 degree summer day in muggy Takoma Park feels better than the sickening 105 degree studio, packed with sweaty students. The suffering I endured gave me quite a new perspective.

Kehne shares my appreciation of the experience. "After you walk out," he says, "it's like a perfect cool breeze," he says. "You get this general feeling of euphoria. You're completely in the moment, relaxed, chugging Gatorade. That's definitely stress relief." 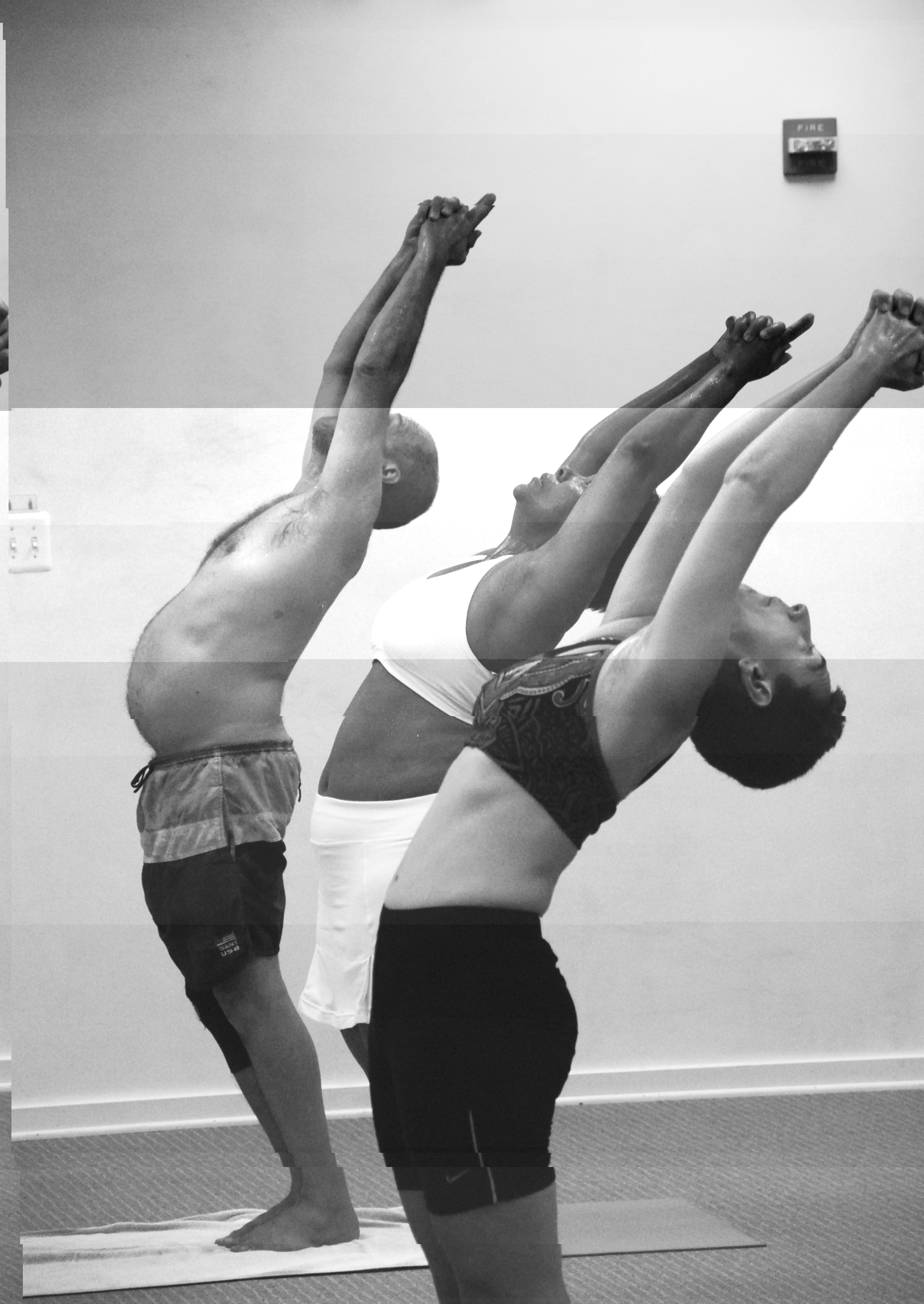 Photo: Students move to the second posture, the Arda-Chandrasana, also known as the half moon pose.

Photo: Students move to the second posture, the Arda-Chandrasana, also known as the half moon pose.

Bikram yoga is like nothing else I've ever encountered. Pleasant and Kehne compare it most closely to cross-country running, due to the level of dedication required. But it's much more than commitment. "It's the absolute best feeling," Kaufman says. "It doesn't matter what season it is. Just going out into the world after that feels great."

There's a lot to gain from Bikram yoga, and it's really starting to grow on me. For some strange, possibly masochistic, reason, I love it, and I want to keep going back. My first class was comically miserable, but I'm glad I wasn't scared off like undoubtedly countless others. It instills a sort of peace and acceptance, eventually, but also conviction and dedication, unlike anything else I've experienced. I'm surprised by how different each class is to me, even with such a rigidly similar procedure.

For a growing number of Blazers, Bikram yoga is a great way to release toxins, stay in shape, and most of all, manage stress and stay in a present state of mind. Love it or hate it, it's certainly an unusual experience, and for me, it was definitely worth a try.