The boys' swim team placed 11th out of 33 teams against competitive private and public school teams from across the region in the Metros competition. The boys', after a rash of slow swims at the County championships, were able to improve many of their times in the last post-season swim season. Blair placed 21st overall out of 47 teams.

The Metros is the swim event in which the cream of the crop swimmers from across the local area competes. While the near-deafening cheers from both parents and swimmers permeated the stands, the sound of the swimmers below breaking records eclipsed the entire pool in one of the most exciting post-season swimming competitions.

The Metros, which heavily focuses on individual swimmers, has a preliminary component that swimmers must pass before participating in the finals, which are divided into an A heat and B heat. For the boys' swimmers who made it to the Metro finals, swimming well after the disastrous county meet last week was the only thing on their mind. "Our only goal was just to swim as fast and as well as we could," said co-captain senior Robert Feasley.

The boys' 200 Medley team, composed of junior Sam Bullard-Sisken, co-captain junior Eddie Qian, Feasley and co-captain junior Yang Yang, who had barely made the A final in the preliminaries, placed 7th with a time of 1:42:57.

The 400 Free Relay team, with sophomore Andrew McGehee, Feasley, senior David Vuong and Yang, placed 9th with a time of 3:23.03. 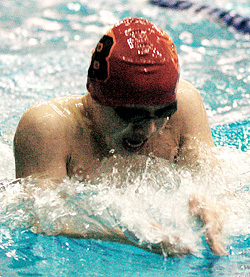 Qian made his own personal goals in his own events, when he broke his 23-second time in the preliminaries in the 50 Free. Qian, who has been working toward trimming his 50 Free this year, received a 22.87 to place 18th. He plans to break the 21.9 Blair record next season.

While the boy swimmers fared well overall, the swimmer deserving the most recognition was freshman Jeffrey Lin. Lin, who started off with a 2:10.71 seed time in the 200 IM, dropped nearly five seconds in the preliminaries to a 2:05.34. He later dropped time again in the finals to place 18th overall with a time of 2:04.87. Lin represents the boys' continuing potential, as the dozen or so seniors graduate.

While the Metros is largely a private school competition, in which many of the public school teams struggle, the boy swimmers agree that the Metros is a worthy experience. For Feasley, swimming at his last Metros meant much more than a competition. "It's just [an] honor to be here, you're in the presence of greatness," Feasley explained, referring to the numerous records broken at the meet. "I couldn't think of a better way to end my high school career," he added.

Despite the mediocre finish at the Metros, the boys' couldn't have hoped for better at this meet. A sense of elation punctuated Feasley's feelings about the meet. "It's just fantastic. It's so great," exclaimed Feasley. "I'm so happy."