In step with politics

John Kerry tells a joke that actually gets laughs. George Bush retells the chicken-crosses-the-road story as a metaphor for "cutting and running." A "joke-off" between these two political figureheads hosted by a Barbara Walters look-alike might seem unusual, but never on the stage with The Capitol Steps, a performance group of 30 actors and musicians that thrives on comic satire of, as the actors put it, "vicious scandals" in the political arena.

While at first a young viewer may be disheartened by the show's average viewer (well over 50, fond of fur and polite tête-à-tête about the latest Broadway show), The Capitol Steps more than make up for any out-of-place discomfort with grand jokes about small political affairs with song and dance numbers featuring mocking impersonations of both sides of the partisan divide. As it turns out, The Capitol Steps do not discriminate along party lines, and equally make fun of everyone and their habits, from Dick Cheney's trigger-happiness to Hillary Clinton's political baggage of her ill-reputed ex-president hubby. 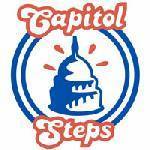 The Capitol Steps were originally formed, the tale goes, as a politically satirical holiday skit in 1981 among the staff of Illinois Senator Charles Percy. The idea evolved, and soon the show, whose name comes from an infamous scandal involving ex-Congressman John Jenrette, gained new members from other Congressmen's staffs, most of whom eventually quit their jobs, and The Capitol Steps troupe became roughly as it is now. 26 years later, with a slightly altered cast composition and a lot more material to draw upon, The Capitol Steps still delight in making comical satire of the daily political happenings. Their show is infamously ever-changing, as advertised on their pamphlet, often depending on "the scandal of the day."

A typical Capitols show includes about a dozen or so acts, each appropriately matched with original show tunes or 60s era songs lifted and revamped for the political scandals at the time. "Love Potion #9," a classic and well thought-of love tune by The Clovers becomes "Polonium 209," a ditty about the dangers of drinking tea from KGB agents sung by a shady-looking trench coat-sporting spy.

"I Like Big [Tax] Cuts and I Cannot Lie" is sung by a safety vest-clad, shotgun-toting Cheney, very much in the style of the song's original author, Sir-Mix-A-Lot. "God Bless My SUV" takes an archetypal patriotic tune ("God Bless the U.S.A.") and turns it against corporate America, ranting about the diameters of American rears, the size of the average SUV and the frequency of Starbucks cafes. The rhyme always works and the voices of the Broadway musical veterans serve for a wonderful performance.

Perhaps most memorable of all the Capitol skits is the "Lirty Dies" act, starring veteran Michael Loomis, who gives unusual orations on political topics, by switching the first letters of phrases in his speeches, rarely stopping to explain their original or newly acquired meanings (Flip Their Words becomes Wip Their Flords and so on). The result is a very humorous jumble of juxtaposition of words that fail to make sense by themselves (skiny? tandle?), but effervesce with double meaning when stuck together (skiny tandle – tiny scandal).

Some of the jokes appear stale and rude to viewers, but the tremendous charisma of the actors and the absurdity of some of their skits make up for any instances of bad taste that may arise. For cynical and unreserved criticism of American politics, The Capitol Steps deserve a viewing if for nothing else but a lack of something better to do on a Friday or Saturday Night.

The Capitol Steps perform 7:30 p.m. year-round at the Ronald Reagan Building on Fridays and Saturdays. Tickets are $35. Information on the actors and Capitols paraphernalia can be found at their website.