In the big leagues

Adrenaline buzzes through the air and bright lights glare against hopeful faces. They take their places on the court, on the mat or on the field. The sidelines and bleachers are filled with fans to watch the nation's best. Numerous Blazers work relentlessly to participate in these national competitions, preparing to play their hardest for a chance to be the best amongst the nation's most talented competitors.

Most Blair athletes attend two-hour practices during their respective seasons. For some Blazers, seasons never come to an end. Various competitions can require traveling far distances, many require practiced finesse and others sheer aggression. However, regardless of the game or the sport, all of the competitions demand excellence.

Clocking in more than 10 hours of practice every week throughout the year, they spend most of their time working toward specific tournaments and competitions rather than single games. Finding their talents at a young age and honing them constantly, these Blazers find themselves facing harsh competition and grueling practices on a national level.

Standing proud and confident on the court or the field is nothing new for these Blazers, as many of them have been playing since early in their childhoods. For them, a love of the game combined with hours of intense practice and playing have made competing a second nature. 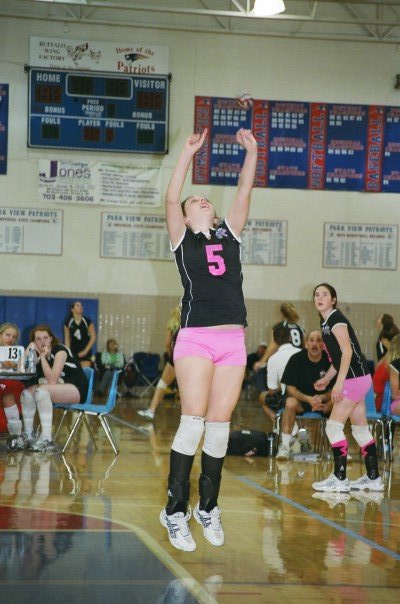 Sophomore Robert Huang and junior Julia Skolnik, who both compete in national volleyball tournaments, were driven to begin playing as youngsters due to their parents' histories with the game. Huang recalls how his parents' love of the game influenced him to play, even before he was aware of it. "My parents brought me to the court when they had to play games," Huang says. "Even when I was a baby."

Skolnik's father can almost always be found sitting in the bleachers, watching his daughter burn up the court. "I definitely started playing because of my dad," Skolnik says. "I started off by playing with him on the beach, and that's when I realized that I wanted to seriously play."

Huang and Skolnik both attribute their success so far to their fathers' influences on them to play the game. "My dad tells me stories of how he got me to pass the ball with him 100 times when I was six," Huang recalls.

For freshman Jamie Kator, her idolization of her big sister compelled her to begin playing soccer at the age of four. Kator began playing on a boys' team at age six, pairing her graceful agility with the aggressive rallies of a boys' league.

Kator now competes in the U15 National Team, a team comprised of girls chosen through the Olympic Development Program, feels that without her sister, she may never have even considered playing soccer. "The only reason I [started playing] was because my older sister did," Kator says. 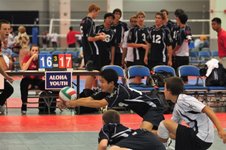 A simple love of the game and family history is not enough to make an athlete ready to compete nationally. As Blazer competitors have proven, years of strenuous, exhausting practice is integral and necessary in order to succeed.

Most high school athletes spend upwards of 15 hours a week in the gym to train for national competitions and tournaments. Skolnik endures an hour and a half of conditioning three times a week before starting a two hour practice. Kator, who spends two hours a day at the Soccer Plex or Lewinsville Park, also takes it upon herself to hold personal training sessions in her backyard during her off-time.

To others, such as juniors Ben Shaya and Jon Lockwood, prepping for a competition is much less physically exhausting and much more brain-wracking. Lockwood uses his unorthodox abilities to compete in national Tiddlywinks competitions. Tiddlywinks is a sport in which a player, using a larger disk, attempts to pop a small disk (called a "wink") into flight and into a pot or cup. A member of Blair's Tiddlywinks club, Lockwood gets in practice both at school and at home to master the sport on a national level. 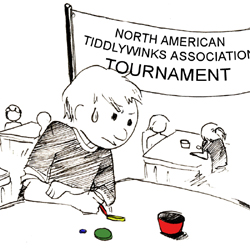 Shaya has competed in the United States of America Computing Olympiad (USACO) every month since his sophomore year. The USACO is an algorithm-based competition in which each person is given a set of problems and must find the most efficient algorithm to solve it, according to Shaya.

He finds that preparing for these national competitions takes a lot of practice and a lot of time "They can also be pretty darn expensive," he says. "And hard to fundraise for."

All the time and money put into competing nationally is worth the effort for these Blazers. "It's a chance to prove I'm good at what I do,” Shaya says.

With all the practice and preparation these Blazers put into their respective sports, they are not daunted by the tough competition that awaits them. Viewing their showdowns with competitors as learning experiences, there's not much that can phase a Blazer on his or her court.

Skolnik and her Junior Olympic Volleyball teammate, junior Sibyl Brown, are often faced with a high level of talent in their weekend tournaments across the country. However, rather than being intimidated, Brown and Skolnik try to take an optimistic stand. "It's not only fun, but it's also a great learning experience," Skolnik says.

The quality of play is definitely one major difference between competing nationally and competing locally, according to Kator. "The way the national team plays the game is entirely different from here. The game is faster, smarter and more skilled," Kator says. Like a true champion, competing with the best only makes Kator play better. "It's boosted my confidence. It's changed the way I play soccer," she says.

Though it's difficult to imagine doing anything else than the sport one has played for years, these Blazers know for sure that their hearts will always be in the game, even years from now. 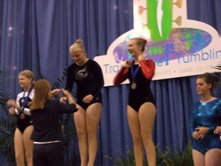 Junior Lauren Krohmer, who was proud to win gold at Nationals for gymnastics tumbling, plans to compete nationally as long as possible and then turn to helping other young hopefuls achieve what she has. "I definitely see coaching in my future," Krohmer predicts.

Kator and Skolnik also plan on staying in the game through college and perhaps beyond. "Competing nationally is what I see as my future now," Kator speculates. Filled with hopes and dreams, she adds, "I may have a good chance at playing pro, assuming I keep improving and stay at a high level."

Regardless of how, where or when Blazers compete, they can all agree that just being able to compete in national competitions is a rewarding experience. As they lace up their sneakers, warm up their brains or take a quick stretch, the chance to be great stands in front of them. "We work so hard and to get the chance to play against the best is mind-blowing. It's a crazy experience,” Skolnik says proudly.