Then he has no more time to consider the graffiti as the first year students at the United States Military Academy at West Point rush into the gas chamber. 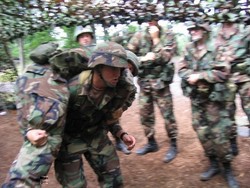 Photo: Jamie Platky, a 2003 Blair graduate, completes a training excercise at the United States Military Academy at West Point in the course of working towards his 2007 graduation and accompanying commission as an officer.

Photo: Jamie Platky, a 2003 Blair graduate, completes a training excercise at the United States Military Academy at West Point in the course of working towards his 2007 graduation and accompanying commission as an officer.


The tear-gas inside is entrancing. The droplets sparkle and glisten, almost like glitter. But according to Platky, each one burns unprotected eyes, noses, throats and lungs.

The freshmen line up against the walls. They casually perform some jumping jacks. Assured all the gas masks work properly, the director of the activity tells the students to take their protective gear off in pairs.

Each student takes one big gulp of air, pulls off their mask, and tries to spit out their name, rank, service number and hometown without taking another breath and inhaling the gas. Platky gets his information right on the first try. His partner does not.

While he waits for his comrade, Platky is told to do push ups. This is no simple task. "Military teargas is nasty stuff," says Platky, "for me it was like somebody had reached inside me and was squeezing my lungs."

When Platky's partner finally completes the task, the two of them stagger outside. Some of those already finished are vomiting or screaming, others are crying or have snot dripping down their faces. "I'll never forget that for the rest of my life," says Platky.

Platky entered West Point after graduating from Blair's Communications Arts Program in 2003. The experience has been trying, but Platky knows he made the right choice. Military careers are difficult and demanding, yet courageous men and women still find it within themselves to enlist. According to the Department of Defense, the U.S. military recruited 163,259 citizens for active duty during the past fiscal year, which ended on Sept. 30. In an informal poll of 100 Blazers conducted during 5B lunch on Nov. 17, 23 percent said they were considering a career in the military. Senior Jonathan Organista is one of them.

"Be All That You Can Be"

Organista sports a "Go Army" lanyard he says he got from a girl. Among his military paraphernalia is another lanyard he stole from a recruiters' car and a camouflage shirt.

These prized possessions aren't just for show — Organista is already looking into enlistment. "I think the military is a good opportunity for those that think it fits them," says Organista.

Organista has not yet decided if he will actually enlist. Right now he is weighing his options, as he does not want to rush into anything. "They pressure you to join easily and quickly without putting thought into it," he says.

The military still appeals to him as a career option, though. Organista appreciates that the military provides training and discipline to all who enlist. He also likes the self-sacrificial nature of the armed forces. "You're looked at with respect and honor," he says.

Sophomore Christian Flores, who is also interested in enlistment, similarly looks up to America's men and women in uniform. When Flores thinks of service members, he describes an inner swelling of pride. Part of the reason he wants to serve is the deep admiration he feels for members of the military. 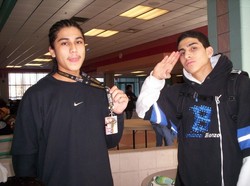 The benefits afforded by the military, such as loans for college, also appeal to Flores. He hopes that someday the skills he gleans from military service will help him become a police officer or a detective.

To get to that point, Flores knows that he will need a great deal of diligence and physical rigor to thrive in the military, but he is not intimidated. He has been reading enlistment pamphlets, and Flores says, "I actually like the thought of boot camp — the endurance [and] perseverance [it takes]."

Platky emphasizes that while learning the necessary skills for success in the military is beneficial in general, it is imperative to remember how these skills will be used. "You're not there just to learn the skills," Platky states, "your job is to apply them, to defend the Constitution of the United States."

Before he can fight for his country, though, Platky, now a junior, must first finish his education at West Point. He cautions that his experience has not been easy. Transitioning to West Point from Blair was rough on Platky. "I haven't adjusted so much as survived," he says. "They toss you in the pool, and you either sink or you swim."

Coming to West Point was a huge culture shock for Platky. Suddenly he was in an environment where he wasn't in control of his own life. Platky couldn't even watch movies or listen to music until Christmas of his freshmen year.

Besides a lack of personal freedom, Platky has dealt with intense physical conditioning. He recalls one particularly harsh night during which the students were in a field in the pouring rain. An extremely skinny friend looked as if he was "about to die of hypothermia." Platky and his comrades grabbed the kid, put him down on the only available surface (rocks) and proceeded to "spoon him to keep him warm."

Such physically straining experiences create a lasting bond between students. Platky says of his companions, "we've just been through so much together… The best part about it is I can look back and laugh."

Known for its rigorous physical training and disciplinary code, West Point is also intensely academic. Platky's girlfriend and 2004 Blair graduate Lindsay Hocker knows how prestigious West Point is considered. "You can get anywhere with that education," she says.

A choice education, like that at West Point, comes with a great deal of stress, but whenever Platky is feeling overwrought, he tries to keep the big picture in focus. "I might have a lot of homework but at least I'm not in Iraq right now getting shot at," he articulates.

Platky eagerly awaits graduation in 2007 and receiving his commission as an officer. He would like nothing better than to "get out and do the job I came here to do."

Regarding the situation in Iraq, Platky says that, "everybody's apprehensive, but it's mostly that everybody wants to do a good job." He says his biggest fear is looking incompetent in front of his platoon.

As for Platky's loved ones, they have larger concerns. Hocker is accutely aware that Platky's life could be in danger one day. "It's nerve-wracking and scary when someone you love is in harm's way," she says.

Platky's mother, Blair administrator Robin Platky, also agonizes over his future. She is very proud of his choice and supports his decision, but she says that as "his graduation is coming quickly and we're still in the midst of a war, I begin to worry."

The war in Iraq is not just a source of worry for those already enlisted. The nation's state of war is also affecting enlistment. For example, the conflict is contributing to Organista's hesitance to enlist. "The time period we are in now with the war is a dangerous, critical time… I wouldn't choose to leave my family," he says. 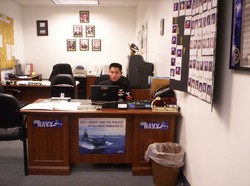 uate Quan Nguyen says that finding enlistees is not difficult despite the recent counter recruitment movement by Blair parents. "We never let that stuff interfere with our job," he asserts.

Family concerns are an important factor for many considering enlistment. Flores originally worried his family might not support his desire to enlist. Instead, his mother was very understanding of his ambitions. "Whatever you have to do to succeed in life, then do it," Flores recalls his mother saying.

Though Flores is focusing on high school for the moment, he plans to head to a recruiting center in a few years. Flores says he's considering the Navy because his brother used to be in the Navy.

"We've Been Waiting for You"

Flores is exactly the sort of conscript Nguyen looks for as a recruiter. When Nguyen joined the Navy, he also, "wanted to do something to help out the country instead of just myself."

Nguyen believes that the armed forces provide a solid foundation in a wide variety of abilities which will help enlistees throughout their lives, whether or not they remain in the military. Overall, Nguyen says that joining the military "is a good experience. It's going to help you out even if you get out of the military."

After enlisting, Nguyen spent three years in Japan, where he received combat training on M-16s, M-14s, shotguns, handguns and rifles.

Upon his return, Nguyen felt the need to spread his passion for the Navy. Nguyen says that as a recruiter, he is excited to "pass on [my] knowledge to the kids at Blair so they can consider [the Navy] as an option."

The Navy has been such a positive experience for Nguyen that he plans to stay until he retires. He feels comfortable and accepted by his counterparts. "The Navy is one big family — no matter where we go, we're always there for each other," he says. Though such solidarity was not immediate when he first joined the Navy, and adjusting was originally difficult, he is pleased with his choice.

Platky is similarly pleased that he decided to stay at West Point, despite his intermittent doubts. When he was coughing and gagging in the gas chamber, Platky was about ready to give up on his dream and quit.

Throughout his training, Platky says that, "A thousand times I must have thought this isn't worth it, but I'm really glad I decided to stay."

Platky's mother is also glad he decided to stay. In going to West Point, she says Jamie "absolutely made the right decision."

Her experiences with her son have led her to see the benefits of a career in the military for all kinds of students. "I think the military is a good place for kids to continue their education, go to school [and] grow up," she says.

As for Platky's future, he is filled with both excitement and apprehension at the thought of going into combat. But in spite of his trepidation, Platky knows his training will serve him well. "I really feel prepared for whatever's out there," he says.