Increase in drug busts at Blair

There have been 10 reported drug-related incidents involving Blair students since the beginning of this school year, according to Security Team Leader Kathleen Greene. This is already an increase from last year, during which there were only five reported "serious incidents" related to drugs, according to the School Safety and Security At a Glance report, available on the Montgomery County Public Schools (MCPS) web site. 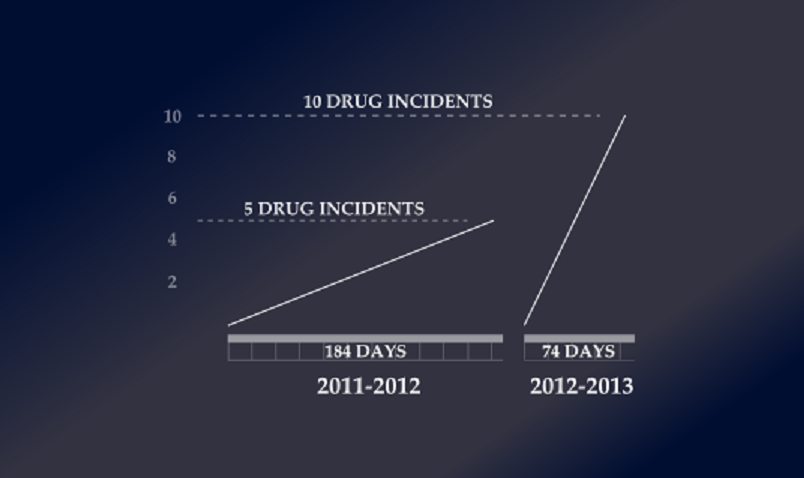 Photo: There have already been twice as many reported drug incidents at Blair this year as there were all of last year.

Photo: There have already been twice as many reported drug incidents at Blair this year as there were all of last year.

The increase in drug busts this school year may not necessarily be due to an increase in students using drugs, but due to this year's tight security. Greene said that she has staff stationed all over school and cameras that help them catch kids in the act. Students have also helped by speaking up when they see drug occurrences. "Kids are helping us by reporting [drug] incidents," Greene said.

Three of the 10 incidents this school year did not occur on Blair property, according to Greene. "Three [students were] arrested off campus, and the police notified us," she said. When the local police catch students with drugs off campus, they contact the student's school's Security Team.

Upon catching students with drugs, Blair reports them to the police immediately. "At Blair we have zero tolerance. [If] you get caught we call the police right away," security guard Jeffery Seals said. According to last year's statistics, the police were called for three of the five events.

Once the police hear of a drug-related incident, they decide what legal consequences the students receive. Students must then attend a school hearing. "The school hearing decides [the criminal's] status as a student," Greene said. At this point, the offending student can be either suspended, expelled or sent to a detention school.

Sophomore Ishaan Parikh feels that security is doing their job but they could do better. "[Security is] doing their best but more needs to be done," he said. "I'm comfortable [in Blair because] no one is blatant about [their drug use] but I do know what goes on behind the scenes."

Freshman Maris Medina also feels that the drug use at Blair does not affect her, but she disagreed about student's blatancy in their drug use. "If people are doing drugs they don't really ask me to do it with them [but it is] pretty obvious that some people do drugs on campus," she said.