The Blair Sports Academy's (BSA) indoor soccer league began last month and is now running smoothly, organizers say. The academy will continue to seek funds to expand the program for this summer and next year.

The league was founded last spring in response to a rise in gang activity and is sponsored by the Blair Gang Task Force, a committee of staff, students, parents and community representatives.

The soccer league is the latest in a series of efforts to curb gang recruitment and gang-related crimes by keeping students occupied between 3 and 5 p.m., often considered the peak hours for gang activity. "Just get them off the streets," 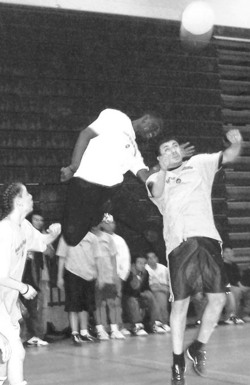 said Security Assistant Jose Segura, one of the league's organizers. "Gangs target these kids and make them do things, commit crimes. It's crazy."

Now in its second year, the indoor soccer league has grown from last year's 14 teams to this year's 24. Physical Education teacher Emanuel Charles, who works with the league as a referee and security assistant, attributes this growth to soccer's popularity with students and the values that the league fosters. "Any time you have a sports activity, kids get excited; they get involved. It's all about fun and sportsmanship and living by the rules," he said.

To play, students must agree to a set of rules stipulated by the BSA, including an agreement not to wear gang colors or throw gang signs and to attend tutoring sessions when in need of academic support. So far, Segura said, these requirements have not hurt the program's popularity. Opening day was packed, he said. "Around 200 kids were there watching the teams [and] off the streets."

Although the league attracts a large number of students in English for Speakers of Other Languages (ESOL), the program is open to the entire school and aims to help a wide variety of students. "It's fun because you get to meet a lot of people you might not even know," said senior Abdul Muhktar, a member of team Brothers United, which reached last year's championship match.

The BSA has received a total of $8,100 to run the soccer league, which will continue until early June. The Gang Task Force acquired grants or donations from organizations including the Montgomery County Hispanic Chamber of Commerce; the local business Aquas, Inc.; the Montgomery County Department of Recreation; the Blair Student Government Association; and "Drawing the Line on Under-age Alcohol Use," a countywide program fighting underage drinking. The Montgomery County Police Department provides an officer to work security each Monday, Wednesday and Thursday, when matches take place in the small gym.

This summer, BSA will expand to include at least one free summer camp at Eastern Middle School, according to ESOL Parent-Community Coordinator and Gang Task Force member Susan Gardiner. The program will begin as a 30-person pilot program with 10 at-risk students nominated from each of Blair's three feeder middle schools. The camp will have three parts: a YMCA-sponsored program that includes activities like sports, field trips and swimming; an anti-violence community service project; and the "Get Real About Violence" classroom program, which teaches students about decision-making skills and avoiding violence. Students will attend the camp from July 5-29 and will be bussed directly from summer-school sessions to Eastern for the program. If successful, Gardiner hopes to increase the program's capacity by up to 120 students for summer 2006.

In addition to the summer camp for middle school students, the BSA will try to promote education for ESOL parents through a Latino empowerment course called "Conquista Tus Suenos" - "Realize Your Dreams." The course, offered with help from MCPS, would help parents of students in the BSA learn to improve communication, parenting, personal goal-setting and family relationships, according to Stacey Gurian-Sherman, who is involved with the program. "Conquista" is conducted in Spanish and is open to all parents in the Blair cluster.

The Task Force is currently working to obtain grants from smaller non-profit organizations while it waits for the County Council to vote on a $25,000 grant. If the BSA gets the grant, the Task Force will be able to implement a second camp - this one for Blazers who would learn about conflict resolution while participating in a similar sports program. The grant would also make possible a fall 2006 three-on-three basketball league and the spring 2007 indoor soccer league. Funds for the 2005 and 2006 soccer league seasons are already in place.

The $25,000 would help the BSA significantly, although Segura said the Task Force would need upwards of $67,000 to run the program as it was originally conceived. He noted that reluctance to designate even more funds to the program probably exists because it is so new. "When programs like this start, initially people are apprehensive because they want to see if it will work," he said. "Hopefully, this will work out. I think it will."

The BSA indoor soccer league's 24 eight-person teams are divided into groups A, B and C. The top four teams in each group, along with the best four remaining teams from the rest of the league, will enter a single-elimination tournament for the coveted BSA championship. To catch up on current indoor soccer standings, check out the bulletin board outside the ESOL office.

Samir Paul. <b>Samir Paul</b>, a Magnet senior, spent the better part of his junior year at Blair brooding over everyone's favorite high-school publication and wooing Room 165's menopausal printer. He prides himself in being <i>THE</i> largest member of Blair Cross Country and looks forward to one more … More »