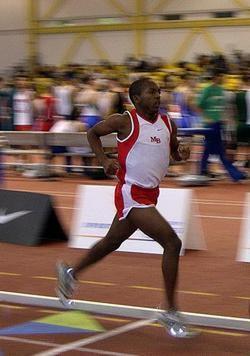 Photo: Josh Uzzel sprints to the finish line during an Indoor Track meet.

Photo: Josh Uzzel sprints to the finish line during an Indoor Track meet.

The Blair Indoor Track team competed in its first Montgomery County developmental meet today at the Prince George's Sportsplex. Blair competed in multiple events including several relays as well as individual events. Blair placed well in events such as the boys' 4x200m relay and the girls' one mile, two mile and 4x800m relay races.

These developmental meets give students the chance to compete against other schools without official times or finishes. Personal times were kept by Blair in order to track each runner's progress throughout the season. Today several players set personal records even though there were difficulties that the team had to overcome.

Sophomore Josh Uzzell ran a 4:55 mile, a new personal Indoor record, but was hindered during the two mile race and finished at 10:57. Halsey Sinclair ran her mile in 5:23 and placed second, while her sister Ashlyn Sinclair finished in first place at 5:15.

In many of the relays, the hand-offs of the baton were too slow, impeding the progress of the team. Sophomore captain Aaron Townsend said after the meet that the team needs to communicate hand-offs more effectively to lessen the problem. In the 4x200m and 4x400m races, the boys' teams struggled to keep momentum during the transition between one runner and the next. Junior Thomas Dugan said, "From a sprinter's point of view we really need some fine tuning on hand-offs as well as timing and pace.”

During the girls' 4x800m, Halsey ran the first leg, but her replacement runner was not on the track to take the baton. Halsey proceeded to run 1000 meters instead of 800 because of the misstep. Sophomore Johanna Gretschel, a runner in the 4x800 commented on the situation. "That mistake was costly. The distance and mid-distance runners definitely need to practice handing off,” she said.

Every Montgomery County track team was in attendance, along with several D.C. private schools. The intense crowding led to difficulties on the track as many runners fell due to contact with other competitors. Junior Frederick Esch was tripped and fell during his race, but was able to regain his composure and place decently in the heat. The density of runners affected the times of Blair's most competitive athletes the most. "Many runners were restrained by the crowd in front of them. The weaving and pace of the crowd added 15-20 seconds to the final time,” said Coach Carl Lewin. During several races, two runners were placed in each lane. In other heats both girls and boys ran at the same time.

Overall, the team was in good spirits, hoping to improve on last year's record. "We are already a lot better than last year,” said Townsend.

Lewin agreed with Townsend's observation. "The team did as well as they could. The Sportsplex had some organizational issues, but several runners set new personal records,” said Lewin.

Other runners noted that there was a general increase in participation this season, but it has not directly translated to people competing in the events. The roster this year includes 46 runners, although only about 20 runners attended the meet. "More people should be coming to the meets,” said Townsend. "A lot of people were missing today. We have to fix that.”

The solution to the problems seems to be increased dedication at practice. "We have the potential to succeed and reach championship level, but we need to practice to get there,” said Dugan. Townsend agreed, stating after the meet that runners must show up to practice and work hard every day to achieve results.

Lewin was pleased with the performances of the day. "We are right on track. I think that we just have to come together as team.”