Informational meeting on afghan project to be held

Blair will be holding a meeting after school in the Media Center on Mar. 7 for students interested in creating rectangles to make afghans, or knitted or crocheted quilts, for wounded soldiers. 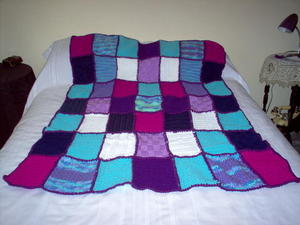 Photo: Volunteers will assemble the donated rectangles into colorful afghans to be presented to soldiers. Photo courtesy of Deborah Starobin-Armstrong

Photo: Volunteers will assemble the donated rectangles into colorful afghans to be presented to soldiers. Photo courtesy of Deborah Starobin-Armstrong

According to Media Center Specialist Susan Madden, who is heading the project at Blair, the meeting will be purely informational. "We're encouraging students to come by. We'll tell them what we're doing and what the cause is so they can decide if they want to make something, and I guess we can teach people who don't know how to crochet as well," she said.

Students and staff members who decide to participate will be asked to create six-by-nine inch rectangles, Madden explained. "Students should bring their own yarn and needles if they can, but we can provide some materials at the meeting, too," said Madden. "You should make the rectangles out of acrylic yarn because some people are allergic to other types of yarn."

Most of the finished afghans, which require 49 rectangles, will be given to the Walter Reed Hospital, said Deborah Starobin-Armstrong, who founded "The Handmade Afghans to Thank Our Armed Forces Project" in December 2004. The rectangles that the Blair community will make and donate will be "laid out and crocheted together by volunteers. We gather about every six weeks at our Put Together Event to lay out the afghans," according to Starobin-Armstrong.

"At our Feb. 18 event we had over 3000 rectangles of all kinds of patterns and colors, although we do try to stay away from pinks and peaches," she elaborated. "Once the afghan is finished it is photographed, washed and packaged with a card that reads `Thank you for your sacrifice and for helping to keep us safe.' She added that there are over 100 volunteers at this point. The next Put Together Event is on Apr. 1, 2006.

On Thursday, Starobin-Armstrong introduced the idea of the afghan project to the school when she came to Blair to speak with SGR about a food drive for Manna Food Center. "While waiting in the main office I was crocheting a rectangle for the project when I was asked what I was making," Starobin-Armstrong recalled. "I've found that other knitters and crocheter are always looking for ways to help. The wonderful woman I spoke with immediately told the other ladies and the word was spread [to Madden]."

Madden said she decided the cause was worthy as soon as she heard the idea, and made an announcement on InfoFlow the next day. "I wanted to help because I know how many people are wounded to protect us. I think [this project] is something positive that Blair can work on as a family," she said.

Starobin-Armstrong said that the knitting/crocheting project is a way for civilians to show appreciation for the armed forces despite their political stance on the war in Iraq. She said, "It is always nice when people are given ways to help other people. This project is to thank our wounded—it is not a statement for or against the war. Letting soldiers know that we support them and wish them a speedy recovery is a great way for the staff and students of Blair to help. Also the handmade afghans are delivered to the Red Cross at Walter Reed Hospital so Blair will be helping people near by."