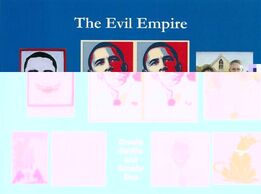 Photo: Crude cartoons are given as examples of anti-Democrat propaganda that fundraisers are encouraged to use to drum up support.

Photo: Crude cartoons are given as examples of anti-Democrat propaganda that fundraisers are encouraged to use to drum up support. Photo courtesy of Politico.

In July 2009 the Republic National Committee (RNC) released an internal memo urging Republican congressmen to slow health care reform to a grinding halt by using any and every tool available to them. According to the Huffington Post, the memo suggested the use of tactics of questionable ethics, including booking surrogates on radio and TV and engaging in dramatic protests outside Democratic events. The Huffington Post also notes that ironically, the memo's authors encourage readers to portray the president as the one acting out of political motivations.

But that memo was just the tip of the iceberg. This week, a new memo became public that did not merely suggest, but urged RNC fundraisers to use fear tactics to pressure, in the RNC's words, "low dollar donors" into contributing.

According to a slideshow presentation recently obtained by Politico, RNC fundraisers were supposed to use "visceral" techniques including "fear and extreme negative feelings toward existing Administration." The slideshow proceeds to ask, "What can you sell when you do not have the White House, the House or the Senate?" The answer: "Save the country from tending towards Socialism."

Then, under the heading of "The Evil Empire," the official document shows crude caricatures of major White House and Congressional leaders - Obama is shown as the Joker from Batman, while House Speaker Nancy Pelosi and Senate Majority Leader Harry Reid are depicted as Cruella DeVille and Scooby Doo, respectively.

In Washington, questionable ethics are not unusual but the sources of fear-mongering are usually politicians or extremist groups. When the national representatives for the entire Republican party exploit fear in order to leverage funding, the tactics become obscene. For an organization that claims to protect the homeland from terrorism, the RNC seems close to advocating terror itself.

Colin Wiencek. I am an avid cyclist who participates in many long haul charity rides. Most recently I participated in Bike to the Beach in July of 2009. <br /><br /> I am an avid photographer and am into video. You can watch my video reel and … More »