This is not original reporting. All information has been compiled from NPR and USA Today. Silver Chips Online posts this news summary to provide readers with a forum for discussion.

Dec. 30 - British computer consultant Peter Moore was released after a two-year imprisonment in Baghdad. Moore, who had been abducted in May 2007, is believed to be the one remaining survivor of the five men who were captured in a raid outside of Iraq's Finance Ministry. Foreign Secretary David Miliband declared that Moore was in good health and attributed Moore's release to "hard work on the part of the Iraqi authorities." Miliband stated that Moore's liberation was part of the "reconciliation process" between the Iraqi government and armed rebel groups.

Brazil
Jan. 1 - Multiple landslides and subsequent flooding in Southeast Brazil have killed more than 64 people. Authorities in Rio de Janeiro and Angra dos Reis have stated that the death toll could double as dead bodies are recovered. Triggered by 10 inches of rainfall that fell in Brazil from earlier in the week, mudslides have been reported in 80 different places. Hundreds of Brazilians die annually in mudslides that damage the slums located on hillsides; however, the dual mudslides on New Year's Day hit upscale hotels and wealthy tourist areas and homes. 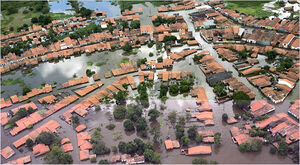 Jan. 2 - Iranian Foreign Minister Manouchehr Mottaki announced that Iran set a one-month deadline for Western countries to approve its counterproposal to a nuclear plan laid out by the United Nations (U.N.). Mottaki stated that if the counterproposal was not accepted by the end of January, Iran would begin to produce highly enriched reactor fuel. The Iranian counterproposal was a response to a deal designed by the U.N. that demanded the immediate exchange of Iran's enriched uranium for nuclear fuel. Despite reassurances from Tehran that this fuel would only be used for peaceful reasons, this ultimatum has raised concerns in the West over Iran's capability to develop nuclear weapons. Tehran issued the U.N. two different choices: to either sell Iran nuclear fuel or exchange Iran's supply of enriched uranium for the West's nuclear fuel in small portions over an extended period of time.

India
Jan. 2 - Two separate train collisions in northern India killed 10 passengers and injured 47 passengers. The first of the crashes took place near Etawah when a train collided with a parked train while entering the station. Although there were no deaths in this collision, 10 people were injured. The second crash occurred near Kanpur, killing 10 passengers and leaving many seriously injured. The two accidents were due to a dense fog and not human error, according to Indian railway official N.K. Srivastava.