This is not original reporting. All information has been compiled from The Washington Post and The New York Times. Silver Chips Online posts this news summary to provide readers with a forum for discussion.

Iran
March 4 - Several key nations on the U.N. Security Council are hesitant to approve a sanctions resolution for Iran because it could sever important diplomatic and military ties between Middle Eastern countries. Lebanon is unwilling to impose sanctions because Iran offered armed force protection to the powerful Hezbollah faction of the Lebanese government. Turkish officials are concerned a sanction could endanger their nation's role as a mediator between nations of the Middle East. Russia's ambassador claims Iran's lack of cooperation with previous nuclear negotiations makes further dialogue futile, but European nations and the U.S. hope to reach an agreement before early May. At this time, the U.N. will host a conference concerning the use of nuclear weapons as a part of the 1970 Non-Proliferation Treaty. Debate on Iran at that time could stall progress at the conference, according to a senior diplomat.

Photo: The Indian Parliament consists of 545 members, the majority of which have been male over the last six decades.

Photo: The Indian Parliament consists of 545 members, the majority of which have been male over the last six decades.

March 9 - After 60 years of male domination in India's legislature, lawmakers have approved a Women's Reservation Bill that will at least one-third of Parliament's seats to be held by women. In both state assemblies and national lawmaking bodies, at least 181 of the 545 members will be women, a number more than three times greater than the current 59 females serving in the Lower House of Parliament. Supporters of the bill claim that such representation will put women's issues, such as female infanticide and gender-based discrepancies in life expectancy, literacy and legal rights, on the policy-making map. Critics argue that the bill is unpractical because it fails to establish quotas for poorer females or those among religious minorities.


China
March 11 - The Chinese government has increased military and police presence in the western province of Tibet to discourage protests that mark the anniversary of ethnic rebellions. The crackdown includes the deployment of 2,800 security personnel around the city and thousands of investigations of both individuals and businesses for potential criminal activity. The government's stringent security forces are a response to a March 2008 Tibetan uprising, which began as a protest held to recognize the anniversary of an unsuccessful rebellion against Chinese rule in 1959. Ever since, the Chinese government has patrolled the Tibetan plateau during March. 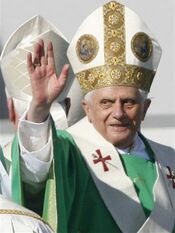 Photo: Pope Benedict XVI has been accused in a sexual abuse scandal for his role in keeping pedophile acts confidential.

Photo: Pope Benedict XVI has been accused in a sexual abuse scandal for his role in keeping pedophile acts confidential.

March 14 - The Vatican defended Pope Benedict XVI's response to a pedophile scandal and vowed to take action against child abuse in Germany. The Pope is accused of allowing the Munich archdiocese to quietly relocate a priest who sexually abused children while Benedict was archbishop. Benedict's 2001 edict requiring bishops to privatize cases of abuse, which the Pope wrote as Vatican cardinal, has also drawn heavy criticism. While the Vatican called allegations of a "policy of cover-up" slanderous and untrue, some Irish bishops admitted there was a general understanding that the Pope's rules discouraged them from contacting police in abuse cases. U.S. victims' prosecutors agreed with the bishops, arguing that the Pope's 2001 directive constitutes an obstruction of justice.