This is not original reporting. All information has been compiled from the Washington Post and Reuters. Silver Chips Online posts this news summary to provide readers with a forum for discussion. 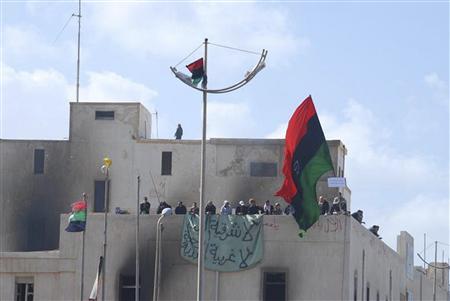 Photo: Protesters wave flags from the top of a burnt building in Benghazi, Libya.

Photo: Protesters wave flags from the top of a burnt building in Benghazi, Libya.

Tripoli, Libya
Feb. 21 - As unrest in the Middle East continues, Libyan protests initiated nearly a week ago hit the nation's capital of Tripoli on Monday. Military forces killed dozens of protesters and arrested many more. The protests put heavy pressure on Libyan leader Muammar Gaddafi, who has been in power for four decades. Similar protests sparked by the pro-democracy revolts in Tunisia and Egypt are occurring in other Middle Eastern countries including Bahrain, Yemen and Morocco.

Cairo, Egypt
Feb. 11 - Fourth Egyptian President Hosni Mubarak officially stepped down from office after 18 days of violent protests involving millions of citizens. Mubarak handed power to the military. Protests in the country began on Jan. 25, closely following uprisings in Tunisia. Since then, the government has cracked down on the media, shut down media access and harassed journalists. During his 30-year reign, Mubarak developed strict security policies that limited citizen rights through methods including censorship and unjust prosecution.

New Delhi, India
Feb. 10 - India and Pakistan agreed to resume peace talks in July, which ceased after the 2008 Mumbai terrorist attacks left 166 people dead. The attacks allegedly involved Pakistani-based militants. President Obama welcomed the agreement. His administration strongly encouraged the resume of dialogue between the two nations, in part because their rivalry poses an obstacle to the stabilization of Afghanistan. India and Pakistan have extremely strained relations, having fought three times since their independence 60 years ago. 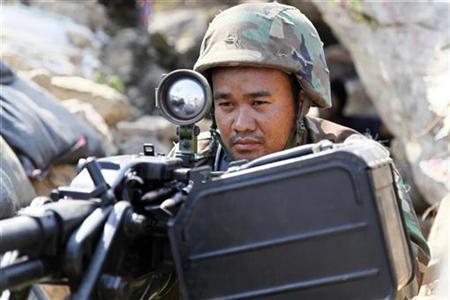 Photo: A Cambodian soldier positions himself near the Preah Vihear Hindu temple located on the country's border.

Photo: A Cambodian soldier positions himself near the Preah Vihear Hindu temple located on the country's border.

Feb. 9 - Thai and Cambodian soldiers fought for nearly a week in disputed territory on the countries' shared border before the conflict was taken to the United Nations for debate. The fighting over a 900-year-old Hindu temple forced thousands on both sides of the border to flee their homes. Both countries also accused the other of using banned cluster bombs in the fighting. The territory on the two countries' border has been disputed for many decades. In 1962, the International Court of Justice ruled the temple was in Cambodia. However, a main access route still remains on the Thai side.