This is not original reporting. All information has been compiled from CNN.com, BBC and Reuters. Silver Chips Online posts this news summary to provide readers with a forum for discussion.

Photo: Afghan election workers load boxes of ballots that will be transported to polling stations.

Photo: Afghan election workers load boxes of ballots that will be transported to polling stations.

Afghanistan
Sept. 18 – After the second Afghanistan parliamentary elections since 2001, International Election Monitors expressed concern over alleged ballot stuffing, voter fraud and widespread violence throughout the election process. Elections were held for 249 seats in the Afghan Parliament, or Wolesi Jirga, for a five year term. Three election workers were found shot to death on Sept. 18, and 21 other Afghans were killed during the voting as Taliban fighters sought to attack voters and election officials alike. The Free and Fair Election Foundation of Afghanistan (FEFA) reported security breaches at 389 polling places, including ballot stuffing, multiple voting and underage voting in many provinces. Fraud investigations and appeals that will take place in Oct., with a final result expected Oct. 30. Afghan officials said that it was too early to judge whether the elections were a fair contest.

France
Sept. 14 – The French senate passed a law that will take effect next spring banning veils that cover the face, including full-body burqas worn by Muslim women. Under the law, women found wearing a burqa or niqab, a shoulder-length veil that leaves eyes uncovered, will be forced to pay a fine of 150 euros or enroll in a citizenship class. The punishment for forcing a woman to wear a head covering is a 15,000 euro fine or a year in prison. This law is the first of its kind to go into effect in Europe. According to the Pew Global Attitudes Project, 82 percent of French approved of the ban, while 17 percent disapproved of it. The Pew Forum on Religion and Public Life estimates that Muslims make up approximately 6 percent of the population of France. 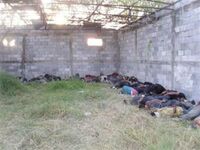 Photo: Mexican authorities found victims of the massacre in an abandoned ranch in Tamaulipas, Mexico.

Photo: Mexican authorities found victims of the massacre in an abandoned ranch in Tamaulipas, Mexico.

Mexico
Sept. 8 – Mexican police arrested seven suspected drug cartel members believed to be responsible for the massacre of 72 migrants just 100 miles from the U.S. border. On Aug. 25 authorities learned that Zeta drug cartel members executed the 72 migrants who refused to work as drug couriers or hit men for the gang, the greatest casualty in an ongoing Mexican drug war that has claimed 28,000 lives since 2006. Migrants looking to enter the U.S. are increasingly targeted by cartels to be drug traffickers or to pay ransom.

Guatemala
Sept. 5 – A landslide in Guatemala killed 22 people and left dozens of others missing. About 100 rescuers tried to dig a bus out of deep mud from a landslide until another landslide covered the rescuers. The Inter-American Highway, a major roadway across Guatemala, had 30 landslides within a 30-mile stretch. Landslides are a national problem for Guatemala, a nation that faced record breaking rainfall this year. In May, Tropical Strom Agatha brought torrential rain and landslides that killed more than 150 people.