A window into Blair's diversity

On Friday, March 18, International Night took place. It was an opportunity for the many various diverse cultures at Blair to represent themselves and their country to the Blair community. 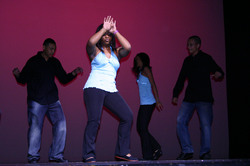 Photo: Hispanic club dancing the Bachata, a passionate dance which originated in the Dominican Republic.

Photo: Hispanic club dancing the Bachata, a passionate dance which originated in the Dominican Republic.

The show, organized by ESOL teacher Margarita Bohorquez, was hosted by ESOL teachers Katie Honerkamp and Jody Tomesek, who introduced each act. The night started with wushu dancing by the Chinese Club. The members of the group were all dressed in silk Chinese attire. Each dancer presented something unique, whether it was showing forms using the staff, or the sword, or, as was in junior Erik Li's case, combining the traditional Chinese martial arts moves with modern day break dancing.

Daughters of Africa took the stage next. The group included juniors Djatougbe Amendah, Bintou Diebate, Nelly Follot, Rosealitha Foie Diafie Tubah, along with sophomores Kowo Jallah, Mariama Yabba and freshman Suzie Sumo. The girls, wearing black spandex pants and white t-shirts, began to rhythmically move to the beat of the music. Then, one by one, each one of the dancers came to the front and twisted their torsos.

The next performance was by the Hispanic Club. Three girls, wearing traditional Spanish dresses complete with layers of frills, did a magical balancing act - dancing while holding a vase of flowers on their heads and smiling all the while. 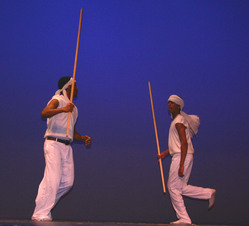 The Cambodian dance followed with "Coconut Shell Dance," which is a dance traditionally performed during weddings and other traditional ceremonies. The dance signifies the friendship between male and female dancers, as well as the usefulness of coconuts to farmers in Cambodia.

The fifth presentation of the night was the Middle Eastern Club, with "Mashallah," which combines two different types of Arabic dancing - Bandhari and Mazandari. The group, consisting of eleven people, put on one of the best dance performances of the night. The performance was enhanced by the matching hip bangles and beautifully colored skirts worn by all of the girls.

The Bachata, a passionate dance which originated in the Dominican Republic was up next, performed by the Hispanic Club. The girls, sporting blue shirts, black elegant pants and three inch heels, danced with their male partners.

Once Bachata was over, the "Punjabi Princesses" took the stage, performing a classical Indian dance mixed with modern dancing.

The Ethiopian club performance, which came right after the Indian Club, really captivated the audience. After they performed all the dancers came up on stage and held two big flags of Ethiopia. This club got the most support from the audience, which kept on whistling and clapping even after the curtains were drawn to prepare for the upcoming appearance.

Following the Ethiopian club was some Dominican flavor. Three guys and three girls from the Hispanic Club danced. During the dance the girls went in circle, moving from one dancing partner to another. When the music was over, one dancer waived the Dominican Republic flag. 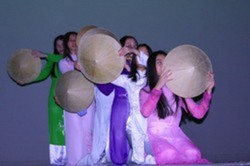 Photo: The Vietnamese club performing a dance from Southern Vietnam.

Photo: The Vietnamese club performing a dance from Southern Vietnam.

The Cambodian Club took the stage for the second time, wearing all orange, but this time to show off their musical skills. First they performed "Stars in the Sky" and then "Chestnuts." They did all of this sitting on the floor, because it is a tradition to sit on the floor while performing in Cambodia.

The Vietnamese Club then performed a dance from southern Vietnam. The girls wore ao-dai, traditional dresses, which emanated grace and style. The girls danced in a circle and then combined other interesting moves to create an appealing dance, with hats moving all the time.

The final presentation of the night was Salsa, performed by juniors Alex Berglund, Wendy Blanco, Karla Cordon and Algenis Liriano. The girls had short black dresses on, while the guys wore black classy pants, topped with purple blouses and sunglasses. The girls seemed to be floating as they exchanged partners, while the guys seemed to never touch the ground, their feet constantly moving.

Thus another International Night came to an end, with a vivid illustration and appreciation of Blair's diversity.