International Night and SGR Spectacular to be held tonight

Proceeds will go to charities

Blair's International Night and SGR Spectacular will be held tonight from 6:30 p.m. to 10 p.m. in the SAC. It will be the first time International club and SGR have collaborated together to put the two shows into one night. 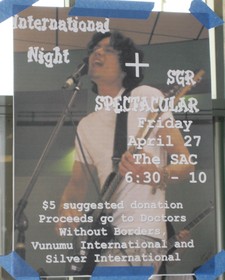 The night will start off by international performances by the Middle Eastern club, Caribbean club, Hispanic club, African club and Ethiopian club, according to Margarita Bohorquez, the International club sponsor. The SGR Spectacular acts will follow.

SGR Spectacular will host a good variety of acts, according to SGR leader Avi Edelman. There will be performances by different clubs, talent acts like swing dancing and poetry reading and also some rock bands. "We have really a good range of performances that showcase the talent at Blair," said Edelman.

While entry is free, contributions of $5 are suggested. International club's proceeds will go to Silver International and Vonumu International, an organization that helps pay for the education of poor and needy children. "We sponsored three children [in India]," said Bohorquez. SGR will be donating the money to Doctors without Borders to address the issue of Sudan genocide. Profits will be split evenly between the two clubs.

Tonight will be an especially different experience with International Night, as it will be the first time the show is held in the SAC instead of the auditorium. International club decided to follow SGR's lead, which always holds the SGR Spectacular in the SAC. The SAC boasts more open space and food and drinks can be served, according to Bohorquez. At the same time, the night will also be more informal without curtain calls or special lighting. "It's going to be more of a showcase than a formal show, which will still be great," she said. "It'll just be different." 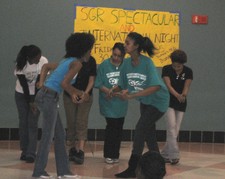 While the performers for International Night are looking forward to the event, some are unhappy about the change of location. "We are a little disappointed it is being held on the stage instead of the auditorium," said junior Nazanin Yousefnejad, one of the dancers from the Middle Eastern club.

The main problem, however, for International club was getting enough acts for the night. "I actually thought about canceling the show at one point," Bohorquez said.

Originally there were only two acts, but luckily three more popped around last week. Usually, there are about 12 acts that sign up, she stated.

In the past, International Night and SGR Spectacular have always been held as separate events. However, due to scheduling conflicts, the two events were combined. "[International club] had the auditorium reserved and we had the SAC reserved [for the same day]," said Edelman.