Blair's annual International Night captivated the audience, taking Blazers around the world with a superb showcase of diverse cultural talents. Although the crowd was small in the auditorium on April 11, the magnificent performances kept the eager audience fired up throughout the night.

The show began with a surprise piano prelude and introduction from Principal Darryl Williams. The Mistresses of Ceremony, English for Speakers of Other Languages (ESOL) teachers Katie Honerkamp and Jody Tomesek, soon took the stage to introduce the night's routines and present a few corny jokes that elicited both groans and chuckles from the audience. 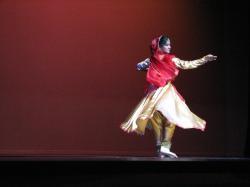 The first act of the evening showcased freshman Ankita Das Gupta performing kathak, a classical Indian dance of story telling. Gupta's glittering dress of gold and red swirled majestically as she whirled faster and faster to the rising tempo of a rhythmic chant. Freshman Sujah Dighe followed with an upbeat presentation of the tabla, a traditional Indian ceremonial drum. The audience was transfixed on Dighe's fingers as they danced across two oddly shaped drums to produce an enthralling variety of beats and notes.

The crowd was soon transported to Latin America as Los Rumberos took the floor with two tantalizing dances - the Bachata and Merengue. Four synchronized pairs of students in flaming red tops displayed fancy footwork as they crossed, spun and weaved between each other.

Next the Bollywood Divas, composed of sophomore Silvi Bogati, junior Afra Lamiya and freshmen Tisha Mondal and Michelle Roche, delivered a series of seamless short dances that combined both traditional and modern dance with popular Indian music. The Divas' catchy moves captivated the audience as they clapped to the beat of the music.

The Caribbean Club soon took center stage for a two-part performance featuring popular dance moves and reggae "dancehall" music from Jamaica that sent members of the audience into hysterics. The two routines that followed reflected a more graceful side of the night. Freshman Grace Wang and eighth-grader Amelia Dahl from Stone Wall Middle School elegantly pranced across the stage as they flourished red ribbons in their Chinese ribbon dance, while the Bollywood Divas returned as the Bangladeshi Gals to conclude the first half of the show with a slow tempo dance accompanied by Bengali pop music.

After a short intermission, Los Rumberos rushed back to open the second half of International Night with a spicy and refreshing salsa duet, which led into one of the most memorable performances of the night in freshman Hien Le's solo rendition of Mariah Carey's 1993 number one hit, "Hero." Le's moving and soulful voice brought the crowd to an uproar. 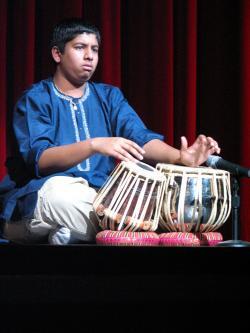 Photo: With flying fingers, freshman Sujay Dighe drums out a beat on the tabla.

Photo: With flying fingers, freshman Sujay Dighe drums out a beat on the tabla.

Tinkus, performed by the Bolivian dance troupe Tinkus Tiataco, wowed the audience with a vigorous folkloric dance that incorporated a rough, fighting style. The dancers, clad in elaborate costumes, glided in a rainbow of glittering colors. The group seemed to conjure up the image of an intense battle between rival villages as they stomped, circled and bounced across the stage.

Def Flava Crew's modern breakdancing routine did not miss a beat, building on the excitement generated by previous acts. Seniors Kiran Harris and Roy Rumedi, freshman Nathan Ipanag and junior Phi Nguyen from Springbrook High School wowed the audience with a dynamic showcase of coordinated aerial acrobatics, flips and dance moves. In the second half of their routine, the crew emulated a dance-off battle between two gangs.

Middle Eastern Dance Club came next with a beautifully choreographed dance that fused Persian and Arabian styles with Iranian and Egyptian music. Each in a flowing dress, the female performers kept the audience mesmerized with their soothing, hypnotic movements.

The night finally concluded right back in America with a performance by The Attributes. Combining styles from rock, jazz and funk, freshman Peter Leonard and senior Mike Willems delivered guitar riffs as freshman Gabe Pollak jammed it out on the drums.

Their sensational performance brought the audience to their feet as the rest of the night's performers took to the stage to deliver a final bow. The diverse spectacles of International Night 2008 certainly made for an experience to remember.