Into the American melting pot

Like many other new students, junior Gabriela Vettiger has spent the last few weeks navigating the world of Blair. But what sets Vettiger apart from the masses is that her home is thousands of miles away in Bottenwil, Switzerland.

Vettiger is attending Blair this school year as a foreign exchange student through a year-long session in the American Field Service (AFS) Intercultural Program. According to the organization's web site, AFS is a volunteer-based program that seeks to provide intercultural learning opportunities by sending 11,000 students to more than 50 countries around the world. 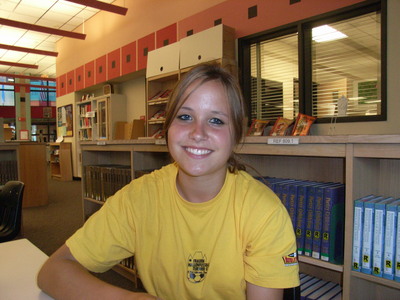 The impact of Vettiger's decision to live abroad truly hit her when she was at the airport in Switzerland bidding goodbye to her family and friends. "I thought, 'Oh, what am I doing here?'" she says. Although Vettiger had contacted her host family before arriving in the United States, she could not believe that what she had been thinking about for so long was actually about to happen. "I didn't know what I was looking at. I didn't know what was in front of me," she says.

Vettiger, who arrived in Silver Spring in mid-August, found the first week especially difficult. Suddenly thousands of miles away from home, she had to forge new relationship and adjust to an unfamiliar environment. She spent the first week sitting at her new family's home, feeling isolated and nostalgic for her old life.

"[When you do something like this], you don't know anybody; you're alone. You have to go to a new family and settle in and you realize that you're here for a year," Vettiger says. "It was hard, but just in the beginning."

Vettiger finally began to feel like she was fitting in when she made Blair's varsity soccer team. The close-knit team companionship has been Vettiger's lifeline in her transition to Blair. Before the school year started, she connected with her teammates at soccer tryouts and practices because the girls all shared a common love for the sport. "They were so nice to me," she says. Vettiger feels that being on the team helped her make a smooth adjustment to Blair socially. "[When school began], in almost every class I knew somebody that I met before from soccer, and it really helped," she says.

But even after merely glimpsing the interior of Blair during August soccer practices and knowing that she'd see teammates in halls and classes, Vettiger was still anxious on August 28. Blair's massive size and student population dwarf her small high school in Switzerland, which boasts a total of about 400 students. "Blair was so huge, and I was afraid," she says.

However, her first day exceeded her expectations by passing by smoothly. She found it fairly straightforward to navigate Blair, despite its size, and was not terribly intimidated by the crowds in the hallways. "It was crazy," says Vettiger, "but I found my subjects and my teachers, so it was not at all a problem."

Initially, she did have some minor qualms getting used to the policies, like the ID requirement. During her first week, she didn't know about the ID policy, and teachers frequently stopped her in the hallway to admonish her for not wearing her ID. "They always [say] something like 'Oh no! Why do you not wear these IDs?' and yell at me," she says. "I can't believe it."

Vettiger says that the major major discrepancy between schools in the U.S. and Switzerland is the homework philosophy and policy. In Switzerland, teachers don't collect homework daily; rather, if the work has to be handed in, the teacher will announce it beforehand. "The teacher says, 'You don't have to do the homework for me, you have to do it for yourself,'" she says. "So, no one does the homework."

Although Swiss teachers don't expect students to hand in homework, students are still expected to master the course material, as there are four to five tests every week, says Vettiger. Each student takes 13 mandatory classes, and learns about 40 pages of information before a test. However, Vettiger finds tests and quizzes at Blair are much easier than the tests in Switzerland. "[For the tests in Switzerland], you can't just memorize what you learned. You have to study, you really have to learn and you have to think about what the questions mean," she explains. These tests, she says, are the only assignments that count toward grades, so students normally spend more time studying than doing homework.

Block scheduling is another new concept to Vettiger. School days in Switzerland are structured very differently, as new schedules are distributed weekly and the classes vary day to day. Despite the scheduling differences, Vettiger finds the overall teaching style of "reading and answering questions" similar at Blair and back home.

More than just a tourist

Vettiger is not the first in her family to travel abroad in high school, as her mother did the same. "We visited her old [host] family," said Vettiger, "and I thought maybe it would be fun. I could do that." A girl from her neighborhood was also involved in a foreign exchange program last year, and came back raving. "She was crazy about it," laughs Vettiger, "and told me that I just had to do it."

Although this is Vettiger's first long-term stay in the Washington area, she is no stranger to the United States. Her mother is a geographer at a university in Switzerland and enjoys traveling and sightseeing with her family. Vettiger, whose travel log includes places from San Diego and Miami to San Juan, has traveled to the United States seven times. But still, she wanted more. "I was interested in being here not as a tourist, [but] to live here," she says.

Vettiger feels there are many educational opportunities and advantages as an exchange student, namely the chance to improve her English. As a result of her traveling opportunities, Vettiger's English was top-notch upon her arrival in the United States. Yet, she still feels that attending school in the U.S. will help her improve. "When you hear the language more, then you're getting better," she says.

Vettiger is enthusiastic and hopeful about what the rest of the school year has in store. From hanging out with her new friends and playing soccer in her free time, to enjoying her classes during the school day, she can already see that she is forming lasting relationships and having experiences which will be tough to part from in June. "It's going really well so far…I think it'll be really hard to leave," she says.