Blair's energetic a cappella group, InToneNation (ITN), stunned the audience once again with a magnificent and creative one-and-a-half hour program showcasing 22 selections last Friday. The show was the latter of two spring concerts, as well as the final concert for the group's four seniors. Throughout its varied and exciting program, ITN exhibited exceptional vocal mastery - not only as individual soloists but also, perhaps more importantly, as a successfully cohesive a cappella group. 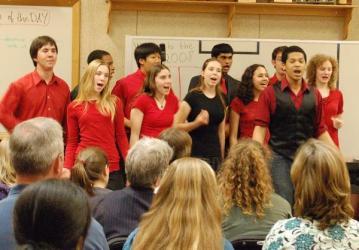 Photo: Blair's a capella group, InToneNation, serenaded a vast audience during its spring concerts on May 9 and 23.

Photo: Blair's a capella group, InToneNation, serenaded a vast audience during its spring concerts on May 9 and 23.

ITN's extensive and creative surprises for its audience began with the opening number. Group members ran through an aisle in the audience, engaging listeners with the familiar theme from "Arthur," a children's television show, by Ziggy Marley. Slightly out of breath and beaming, ITN's musical director and junior Corinne Ducey introduced the group and commented on the vast size of the audience. "I don't think we've ever filled this place this much," Ducey said. The band room was filled beyond capacity, with an extra row of chairs lining the back wall and numerous guests standing or sitting on the floor.

ITN carried its vibrant energy into the next number. Characteristic of most of the numbers performed, senior Annie Ropeik's solo in Billy Joel's "For the Longest Time" was strong and musically impressive. The blend of background voices accentuated Ropeik's solo while providing a solid base for the song.

After two more expressive and engaging pieces - The Beatles' "Paperback Writer," with senior Hareesh Ganesan soloing, and Malcolm Daglish's "To the Holy Spirit" with soloist junior Julie Ufford - group members made formal individual introductions. The singers shared the carefree and outgoing nature of ITN; laughs were exchanged frequently between the performers and the audience.

The concert moved smoothly onto the rest of the program. One piece that particularly stood out was ITN's rendition of Ben E. King's "Stand By Me." Soloists senior Marie Mencher and junior Daniel Woolson began calmly and sweetly. Thus, the audience was thoroughly surprised with the sudden and sharply contrasting interjection of Sean Kingston's hit hip-hop song "Beautiful Girls" from junior Adam Carey. It proved to be a comical and ingenious take on the piece.

Following nine songs, the concert took a brief respite before moving into a paramount component: the gender battle, in which ITN split and performed two songs separately. While the battle was purely friendly, the boys' rendition of "Guy Love" from the television series "Scrubs" was madly entertaining. 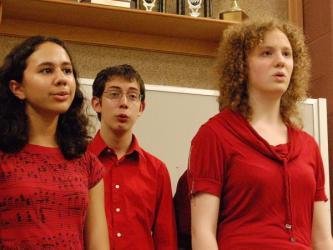 ITN succeeds as a performing group because it takes chances to experiment with a variety of music. From last Friday's program, pieces ranged from classics such as "Paperback Writer" to television show theme songs to Rihanna tunes to even classical music – Tchaikovsky's "Dance of the Swans." Audience member sophomore Sophie Chang also appreciated the group's creativity and variety. "I really like the fact that they incorporate recently released music. It's cool that they're so up to date," Chang said.

Moreover, ITN clearly displays its love for creating music together and sharing that joy with the audience. Near the end of the concert, ITN sang "Happy Birthday" for one lucky audience member, sophomore Diana Jeang. The concert was an interactive experience, and it was clear that both performer and listener enjoyed it. Three songs before the end of the concert, ITN invited the group's alumni members in the audience to perform James Taylor's "Lonesome Road." The group more than doubled in size, as Ducey added sentimentally, "We would not be here without you!"

Even after performing the final piece on the listed program, ITN sang two encore pieces, to the audience's pleasure. The first: the well-loved "Stacey's Mom," from pop group Fountains of Wayne, with Daniel Woolson on solo. The second helping was a fun upbeat version of "Little Bitty Pretty One."