Warning: Seeing this film (for $7) offers the same rush produced by walking repeatedly into door jambs (for free).

Flight of the Phoenix is hardly endearing; at best, it's a tedious excuse to eat popcorn. It is, to revamp one of its wittier lines, a would-be action flick whose one flaw was ever having been produced. The predictable kitsch, failed drama, ill-executed stabs at suspense and tired humor make the film an experience worth missing.

When a transport plane crashes in the searing Gobi Desert, its stranded passengers must devise a plan to get themselves home. The threat of death and improbability of rescue finally force the resentful crew of a newly shut-down oil rig to band together with the corporate employees responsible for locking down their rig. But with tempers running high, conflict is inevitable"until a quirky engineer devises a plan to build a new plane from the wreckage. At first, the group balks, but the project eventually unifies them. Although a series of devastating setbacks take their toll on progress and group morale, the team is able to come together for a final challenge: the test of flight. 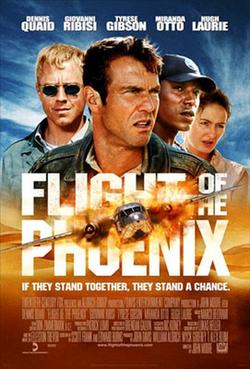 Flight of the Phoenix

Photo: Will this Phoenix fly?

Photo: Will this Phoenix fly?


All but two of the film's characters remain undeveloped and ambiguous. Captain/pilot Frank Towns (Dennis Quaid) and eccentric engineer Elliott (Giovanni Ribisi; Sky Captain and the World of Tomorrow ), are interesting and well-characterized. Granted, Quaid's done better, having played more profound characters ( Great Balls of Fire ), but Phoenix certainly doesn't work against him. Ribisi, though slightly overzealous, is an expressive and intensely manic mad genius. Ambitious with a mean streak, he's excellent as one of the more complex characters.

But not even fantastic acting can get this Phoenix to fly right; taken at face value for an action movie and nothing else, it's a tolerable waste of time whose final conflict, "the deadly brush with oriental smugglers, "is gimmicky and arbitrary. The attempt at drama is paltry, and the tension is hardly convincing or engaging. The ending, following suit with the movie, is predictable. Unexciting explosions and rough but infrequent gore make Phoenix even less profound.

Flight of the Phoenix puts on a disappointing, unmoving show. The end is to be expected, the plot is unexpectedly dull, and overall, it's shoddily developed.

Flight of the Phoenix runs 120 minutes and is rated PG-13 for language and some graphic violence. It is currently playing everywhere.

Anuja Shah. Anuja "Otto" Shah, a Junior in the CAP, -is thoroughly excited to be part of SCO, -enjoys the word "fiasco", -aspires to be monstrously cool, -remains prepared to settle for being vaguely nifty, and -probably owes you money, but has fled the country. More »