The weekend of April 15 marked the 90th anniversary of the Irish uprising against British rule. Thousands gathered outside the General Post Office on Parnell Street in Dublin, Ireland, where the Proclamation of Independence was read to celebrate the anniversary, according to The Irish Times. 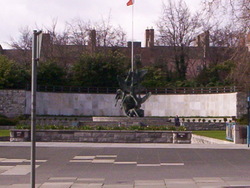 Photo: The Garden of Remembrance in Dublin is dedicated to the Irish who died in the 1916 Easter Rising. The 90th anniversary of the Rising was on April 15.

Photo: The Garden of Remembrance in Dublin is dedicated to the Irish who died in the 1916 Easter Rising. The 90th anniversary of the Rising was on April 15.

Ireland had been under British rule since Oliver Cromwell invaded and conquered the nation in the 17th century. In 1916, after centuries of oppression and discrimination, the citizens of Ireland formed the Irish Republican Army (IRA) and rebelled against the British reign. On Easter of that year, the IRA seized various British buildings in the capitol city of Dublin, hoping that the British would not fire on their own property. The uprising, which was ultimately unsuccessful, served as a starting point in the war against British oppression.

In the years that followed, two wars occurred: the Irish War for Independence and the Irish Civil War in 1919 and 1922, respectively. After numerous treaties for peace, Ireland eventually gained independence from England in the mid-1920s. However, the northern portion of Ireland was, and still is part of the United Kingdom causing many conflicts in recent decades.

As people gathered in Dublin to honor the anniversary of the uprising, the national flag was lowered to half-staff to commemorate the Irish who died Easter week in 1916. Members of the current army, navy and air corps took part in the day's events, while veterans were celebrated and applauded for their service. The parade also included a float that portrayed UN peace efforts.