Is Disney+ really that magical?

The release of the new streaming service shakes the entertainment industry.

With the release of Disney+, a new on-demand streaming service created by the Walt Disney Company this last Tuesday, the television industry is set to change forever. With its unbeatable prices, enticing bundle deals and mega conglomerate power, Disney+ is on track to overtake Netflix (currently at 158 million subscribers) as the world's largest subscription streaming service.

As of Wednesday Nov. 13, the first day after the Nov. 12 release, Disney+ has already surpassed 10 million subscribers. It is not only the old Disney Channel charm that makes Disney+ so desirable. In fact, Disney has played its most powerful cards, price and power, very strategically.

The standard Disney+ plan is $6.99 a month and includes 4K HDR content and unlimited streaming. This price point is almost $10 cheaper than Netflix’s $15.99 Premium plan that allows 4K viewing. For the new platform launch, Disney is also offering a bundle of ESPN+, Disney+ and Hulu for $12.99 a month. With such a drastic price difference, there is no question which service will look better on your bank statement.

The price and package deals are only the beginning. The way Disney+ has rocked the entertainment industry lies in the content. Disney+ is the first service to repeal all of its original content off of Netflix—and it’s a lot.

Since 2013, Netflix has been the biggest pioneer of the streaming world, consolidating everyone’s favorite shows in a one-stop-shop. Now, Disney has pulled all of its million dollar franchises onto its own platform, stripping Netflix from many non-original shows. Disney has produced everything from all the princess movies to Mickey Mouse to Marvel to Star Wars, all of which are now exclusively on Disney+. Netflix is going to need a lot more original hits like “Stranger Things” to dig itself out of this hole.

Sophomore Leila Faraday is worried about the multiple platforms and competing services. “It makes me upset, because I feel like Netflix was a universal place to have all my shows and movies. Obviously nobody wants to pay seven different fees to watch all their favorite shows, so it would be nice to have one big platform. I have, however, watched a few Marvel and Disney movies,” Faraday says.

So, does Disney+ really live up to its magical expectations? Yes and no. The platform’s format is almost identical to Netflix’s format. The saying "if it ain't broke, don't fix it” definitely applies here.

On the home page, the banner on the top scrolls through Disney’s arguably most anticipated and successful sagas like High School Musical, the Avengers and Star Wars. Underneath are Disney’s five major franchises: Disney, Pixar, Marvel, Star Wars and National Geographic. A click on any one of these buttons leads to a seemingly endless scroll of movies, shows and documentaries. 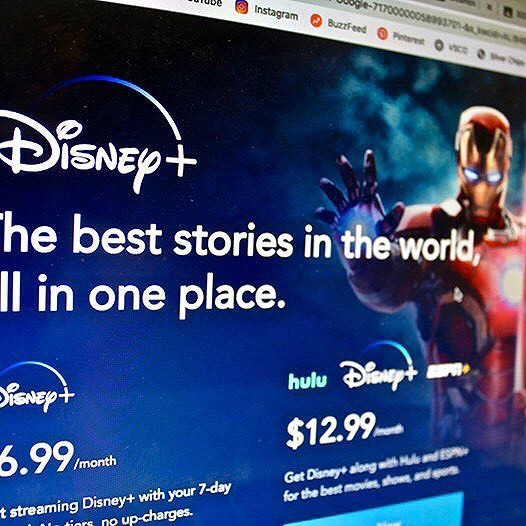 Below the five franchises are the main subcategories found on Disney+. At first glance, the Disney+ platform is well organized with a ‘Recommended For You’ section and an ‘Out of the Vault’ section that holds household animated classics like The Lion King. However, the deeper you scroll, the more you wonder about the necessity of labels like “Feel-Good Sports Movies” and “Best Friends.”

Having almost 25 different subcategories, it is almost as if Disney is trying too hard to compare its depth and variety to that of Netflix’s library of movies. Although Disney has produced mega-hits, it is still not at the level of the amount and diversity of content that Netflix has.

Freshman Chelsea Pineda says that Disney+ does not really entice her away from Netflix. “I like watching comedies like “Big Mouth.” I’ve never really watched those shows Disney produced so it hasn’t really affected me,” Pineda says.

Even with certain downfalls, the mere concept of Disney+ is revolutionary. It is no longer difficult to stream and produce shows in one place. The accessibility of the industry paired with Disney’s monopoly drowns any inkling of competition in a mountain of sparkly blue pixie dust.