Sophomore Dio Cramer sees her sketches realized on the stage

In a span of less than two months, sophomore Dio Cramer has seen her sketches of Venice come to life on the stage of the Blair auditorium. What began as a simple model is now the backdrop for Blair's hip-hop-themed production of The Gondoliers, which opened Friday. Cramer is the first student to design the set since the production of Sweeney Todd five years ago. "It's been an incredible experience," she says. "I drew it out, sketches on classwork, and now it's built on an entire set. That's been crazy! It's like watching your doodles come to life." 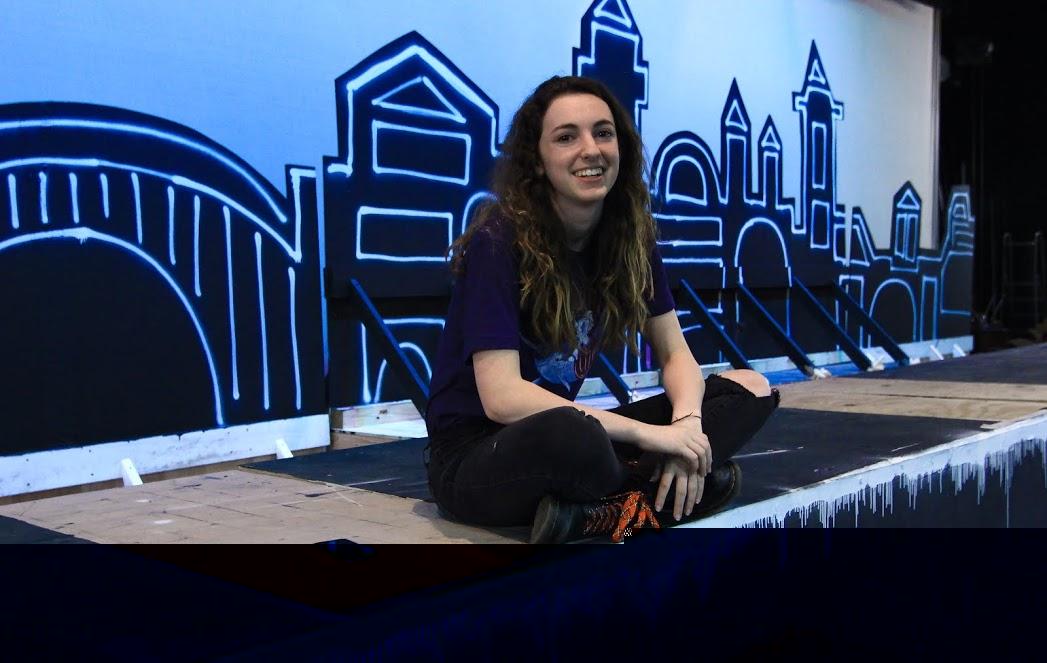 Set in Venice, Cramer's design features three major pieces. On one side of the stage stands the Caff� Roberto, a small structure with a sign advertising speed dating on its front stoop. On the opposite side is an abstract bridge that the viewer imagines stretching over the city's famous canals. Towering above it all is an imposing representation of the Venetian skyline. All three pieces are made of flat black cutouts with detailing done entirely in white graffiti, a nod to the hip-hop theme. "My favorite piece is the skyline," Cramer says, explaining that it actually doubles as an entirely new setting for the second act, which takes places on an island called Barataria. "We have the Venetian skyline with buildings on one side and then during intermission [the set pieces] all flip around and there's new designs on the other side," she says. The spray paint details, all of which Cramer painted herself, give the set a cool city feel. "This was my first time actually spray painting anything patterns, not just a solid color, so that was extremely scary for me to do, " she says. "Especially because [the stage] is so big, it's really hard to get a straight line or a nice curve." The details portray a stripped-down version of the city's architecture, with bridges, domes and columns coming through in striking simplicity.

Cramer's inspiration for her design started with Venice's architecture, specifically its skyline. "[The Gondoliers] is a play that takes place in a definite city. It's definitely in Venice, there's no question about that, and I thought it would be fun to play with a Venetian skyline because that's something that's special to Venice and skylines are just always so gorgeous," she says. From there, Cramer met with stage crew sponsor Brandon Crabtree and director John O'Connor in February, before the club started meeting, to go over her sketches and discuss any additional set pieces or elements that the play required. "We talked about what the play actually needed and what would be helpful for people to stand on and leave enough room for them to dance, as well as what we could actually build in five or six weeks," she says. Transforming the ideas from these initial meetings into a set proved challenging. "This is my first set design ever, so it was quite a process from me sketching it out in my notebook to it actually being transferred onto a stage," Cramer reflects. The sheer size of the stage and filling up a space that large was a major consideration for Cramer when taking her design from paper to plywood. "[The stage] is really big and also extremely tall," she explains, "and when you're sitting far away from it in the audience, it's not just like looking at a sheet of paper." One step in her process included creating a model to get a better idea of each piece's place on the stage. Stage Crew also had to constantly think on their feet throughout the building process, editing the plan and reevaluating their capabilities.

For some crew members, that adaptability is part of what made the process of constructing the design most enjoyable. "Working with Dio was fantastic. It was really nice because she's our friend, so it felt like we all had a little input," senior Rebecca Hamilton-Levi says. The room for opinions and discussion in bringing Cramer's design to life helped give the final product something all of Stage Crew's members could be proud of. For Hamilton-Levi, that special piece is the skyline. "We worked so hard on it and it turned out really great," she says.

Editor's Note: The final performance of The Gondoliers will be held Saturday, April 5 at 7 p.m.