It's a mad, mad March

It's that time of year again. For the next three weeks, you can find any avid college basketball fan planted in front of the TV, wearing apparel from their favorite school or almammater, pounding their fists in frustration at the inaccuracy of their bracket picks. This year, more then ever before, March Madness is driving everyone mad. 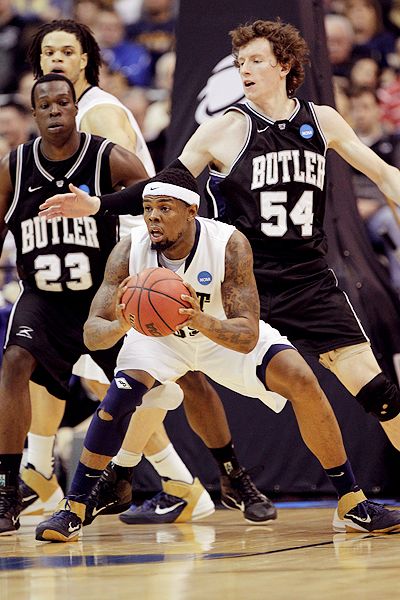 Just as the weather has been completely unpredictable, so have the outcomes of games during this year's National Collegiate Athletic Association's (NCAA) Men's Basketball tournament. Being a college basketball fan since I could first utter the words "KU,” I fill out a bracket every year with a consistent, fairly safe strategy. I can usually count on the number one, two and three seeds of each region to advance pretty far with a few upset picks along the way and in the past two years, it has proven to be fairly successful. This year, however, was another story.

The curse of a number one seed exiting early has struck again in 2011, and it hurt college basketball fans' brackets badly. Last year it happened to Kansas, this year it was Pittsburgh. Who could have known that this number one seed would fall to number eight seed Butler… in the second round? This major upset definitely left a scar in everyone's brackets. Georgetown and Purdue left bracket makers equally frustrated. At this rate, I wouldn't be surprised if it came down to number 11 seed Virginia Commonwealth University (VCU) and number 12 seed Richmond to win the Southwest regional title.

Although brackets may have left basketball fans out in the cold, the competition has been hot. Number one seed Duke just barely edged out a win against number eight seed Michigan last Sunday to advance to the Sweet Sixteen, and number ten Florida State beat number two seed Notre Dame 71-57.

For those of you who are really stressing about your bracket because you are waging money with friends, don't worry, it's still very early in the tournament. Although some upsets have thrown all of us for a loop already, competition is just beginning to heat up as the Sweet Sixteen gets underway tonight.

Brackets aside, unpredictability is what makes March Madness fun. Especially after one's first choice team gets beaten out its always great to piggyback on another team and watch them rise to the occasion. Who doesn't love watching the sense of pride exhibited by that underdog school that really had no purpose in making it to the Final Four but somehow got there? Yes, George Mason, I'm talking about you. If one gets too caught up in one's bracket picks, s/he will in fact go mad and forget what the NCAA tournament is all about: pride. These athletes aren't playing for money or endorsements, they've got six games standing in their way of being national champions, and at the end of it all, they'll return to their dorm rooms to study for Monday's test.

My advice: forget the brackets and enjoy the games, especially since your not alone if your bracket has been royally messed up.